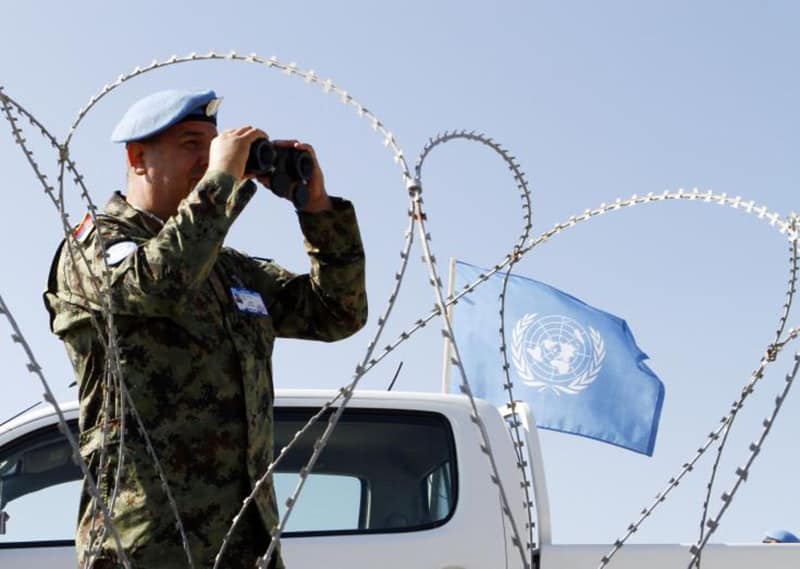 The UN Security Council on Thursday adopted a resolution that will renew the mandate of Unficyp for another six months, until January 31, 2022.

The final text, which was tacitly accepted and will be adopted by the plenary, satisfies all the points raised by Nicosia, with the support of 14 of the 15 members of the Security Council (excluding Britain), especially concerning an equal distance policy for the failure of the informal meeting 5+1 in Geneva in April, and the basis of a solution as provided by the resolutions of the Security Council and Varosha.

The UN Security Council on Thursday adopted a resolution that will renew the mandate of Unficyp for another six months, until January 31, 2022.

The final text, which was tacitly accepted and will be adopted by the plenary, satisfies all the points raised by Nicosia, especially concerning an equal-distance policy over the failure of the informal meeting 5+1 in Geneva in April, and the basis of a solution as provided by the resolutions of the Security Council and Varosha.

It should be noted that the Unficyp mandate is being renewed for six months and not a year as proposed by Britain.

The Cyprus foreign ministry in a statement welcomed the unanimous renewal of the Unficyp mandate.

“The Security Council reaffirms its Presidential Statement of 23rd of July 2021 concerning illegal Turkish actions in Varosha,” the ministry said.

“It is important that, in relation to Varosha, the Resolution reiterates the Security Council’s position that no action should be taken that is incompatible with the above-mentioned Resolutions and calls for actions to be avoided that undermine the prospects for a peaceful solution.”

Security Council Resolution 2587 also recalled the body’s earlier Presidential Statement “which condemns the 20 July announcement by Turkish and Turkish Cypriot leaders on the issue of Varosha, and calls for the immediate reversal of this course of action and the reversal of all steps taken on Varosha since October 2020, reaffirming the status of Varosha as set out in its previous resolutions…”

The ministry highlighted another facet namely that with its latest resolution renewing the peacekeeping force’s mandate, the Security Council reconfirmed all prior relevant resolutions on Cyprus as well as the basis for a political settlement.

In particular, the Security Council made explicit reference to resolution 1251, “by which it clarifies its position that a Cyprus solution must be based on one Cypriot state with a single sovereignty, nationality and international personality, its independence and territorial integrity guaranteed, and comprising two politically equal communities…”

This reference, said the ministry, serves to send “clear message as to the reasons why it has not been possible to resume talks so far, but also regarding future efforts.”

It’s understood this was an allusion to ongoing Turkish efforts to introduce the concept of two separate states into the discourse over the Cyprus dispute.

Unficyp was initially established in 1964 to prevent a recurrence of fighting following intercommunal violence between Greek Cypriots and Turkish Cypriots.

Following the 1974 Greek Cypriot coup d’état and the Turkish invasion of Cyprus, the Security Council extended and expanded the mission to prevent the dispute turning into war, and Unficyp was redeployed to patrol the United Nations Buffer Zone in Cyprus and assist in the maintenance of the military status quo.

The full text of the blue print of the draft resolution presented by the United Kingdom of Great Britain and Northern Ireland is as follows:

The Security Council, PP1. Welcoming the report of the Secretary-General of 9 July 2021 on his Good Offices S/2021/634 and on the United Nations operation in Cyprus (S/2021/635), and expressing its full support for his Good Offices, including the existing body of work, to remain available to assist the sides,

PP2. Underscoring that the responsibility for finding a solution lies first and foremost with the Cypriots themselves, and reaffirming the primary role of the United Nations in assisting the parties to bring the Cyprus conflict and division of the island to a comprehensive and durable settlement with a sense of urgency,

PP3. Welcoming the work of the Secretary-General and that of his team in convening the informal “five plus UN” meeting between the leaders of the two Cypriot Communities and the Guarantor Powers in Geneva on 27-29 April, and noting with regret that sufficient common ground could not be found at the meeting to allow for the resumption of formal negotiations at this time,

PP4. Expressing full support for the Secretary-General’s ongoing efforts and noting the importance of openness, flexibility and compromise in finding common ground with the goal of returning to formal negotiations, and urging the sides to renew their efforts to achieve an enduring, comprehensive and just settlement based on a bicommunal, bizonal federation with political equality, as set out in relevant Security Council resolutions, including OP4 of its resolution 716 (1991),

PP5. Stressing that the status quo is unsustainable, that the situation on the ground is not static, and that the lack of an agreement furthers political tensions and deepens the estrangement of both communities, risking irreversible changes on the ground, and reducing the prospects of a settlement,

PP6. Noting the easing of tensions in the eastern Mediterranean over hydrocarbons exploration, remaining convinced of the many important benefits, including economic benefits, for all Cypriots and the wider region that would flow from a comprehensive and durable settlement, and reiterating the Secretary-General’s previous call to avoid escalatory steps,

PP7. Recalling its Presidential Statement (S/PRST/2021/13), which condemns the 20 July announcement by Turkish and Turkish Cypriot leaders on the issue of Varosha, and calls for the immediate reversal of this course of action and the reversal of all steps taken on Varosha since October 2020,reaffirming the status of Varosha as set out in its previous resolutions, and reiterating that no actions should be carried out in relation to Varosha that are not in accordance with those resolutions, and stressing the need to avoid any unilateral actions that could trigger tensions on the island and undermine the prospects for a peaceful settlement,

PP8. Recalling its resolution 1325 (2000) and all related resolutions, recognising that the full, equal and meaningful participation and leadership of women is essential in building peace in Cyprus and will contribute to making any future settlement sustainable, welcoming efforts to bring together a broader range of women actors on both sides, acknowledging the gender-sensitive socioeconomic impact assessment that was launched on 17 February 2020, and looking forward to the full and swift implementations of its recommendations, encouraging the sides to ensure the needs and perspectives of women are addressed in a future settlement,

PP9. Recalling its resolution 2250 (2015) and related resolutions that recognise the important and positive contribution of youth in efforts for the maintenance and promotion of peace and security, and as a key aspect of the sustainability, inclusiveness and success of peacekeeping and peacebuilding efforts, and further encourages the full, equal and meaningful participation of youth in this process,

PP10. Recognising the ongoing efforts made by both communities to suppress the spread ofCOVID-19 and mitigate its effects, regretting the impact that the largely uncoordinated responses to the COVID-19 pandemic have had on bi-communal engagement, welcoming the reopening of all crossing points and encouraging the return to the status of the crossings as at 29 February 2020,PP12.

PP11. Expressing concern at the continued deterioration of the law and order situation in Pyla, and urging both sides to continue to work with Unficyp to establish effective measures to tackle criminal activities,

PP13. Urging the sides to step up their efforts to promote intercommunal contacts, reconciliation and the active engagement of civil society, in particular women and youth, and recognising that regular, effective contact and communication between the sides enhances the prospects for settlement and is in the interests of all Cypriots, and helps to address island-wide matters, including migration, health, crime, environmental protection, and issues related to the adverse impacts of climate change,

PP14. Noting that the Government of Cyprus is agreed that in view of the prevailing conditions on the island it is necessary to keep the United Nations Peacekeeping Force in Cyprus (Unficyp) beyond 31 July 2021,

PP15. Welcoming measures to date to strengthen the liaison and engagement capacity of the mission, noting the importance of transition planning in relation to the settlement, and emphasising the need to review regularly all peacekeeping operations, including Unficyp, to ensure efficiency and effectiveness,

(a) provide the necessary political support and overall guidance to free the Technical Committees from obstructions in their work and enable them to function effectively, and to empower them to submit proposals for their consideration to enhance intercommunal contacts and improve the daily lives of all Cypriots, and consider the advice of the Good Offices Mission of the Secretary-General regarding further ways to empower the Technical Committees and improve their performance;

(b) engage the Technical Committees more actively to ensure effective coordination and cooperation on matters which have island-wide implications, including through the effective use of the expertise available in the bicommunal Technical Committees on Health, Criminal Matters, Crisis Management, Humanitarian Affairs and Economic Matters;

(d) promote peace education across the island, including by further empowering the Technical Committee on Education to implement the recommendations contained in its joint report of 2017, in particular those concerning policy-making, and to address impediments to peace by conducting a joint review of school materials, including text books, as a contribution to trust-building between the communities, on which there continues to be no progress;

(e) improve the public atmosphere for negotiation to secure a settlement, including by preparing the communities for a settlement through public messages on the way ahead, and delivering more constructive and harmonised messages, including by more explicitly encouraging contact and cooperation between the communities and providing direct support to grassroots people-to-people initiatives, and by refraining from actions or rhetoric that detracts from a successful process or could make it more difficult to achieve;

(f) increase their support to, and ensure a meaningful role for, civil society engagement in peace efforts, in particular strengthening the participation of women’s organisations and youth in the process, and to support implementation of the recommendations of the gender sensitive socioeconomic impact assessment to address existing barriers and ensure a future peace agreement can more equally benefit men and women in Cyprus;

12.Urges the sides and all involved parties to respect Unficyp’s mandated authority in, and delineation of, the buffer zone, reaffirms the importance of the use of the 2018 United Nations aide-memoire by the sides to ensure peace and security in the buffer zone, requests the Secretary-General to report to the Security Council and troop-contributing countries any actions that impede Unficyp’s ability to fulfil its mandate, and calls on both sides to respect the integrity of the buffer zone, to remove all unauthorised constructions and to prevent unauthorised military or civilian activities within and along the ceasefire lines, and urges both sides to take all appropriate measures to ensure the safety and security of Unfocyp personnel;

19.Requests the Secretary-General to submit by 3 January 2022 a report on his Good Offices, in particular on progress towards reaching a consensus starting-point for meaningful results-oriented negotiations leading to a settlement, encourages the leaders of the two communities to provide written updates to the Good Offices Mission of the Secretary-General on the actions they have taken in support of the relevant parts of this resolution since its adoption, in particular with regard to paragraphs 6 and 7 and 9 , with a view to reaching a sustainable and comprehensive settlement, and further requests the Secretary-General to include the contents of these updates in his Good Offices report; further requests the Secretary-General to submit by 3 January 2022 a report on implementation of this resolution, drawing on analysis produced through the Comprehensive Performance Assessment System covering all components of the mission, and to keep the Security Council updated on events as necessary;