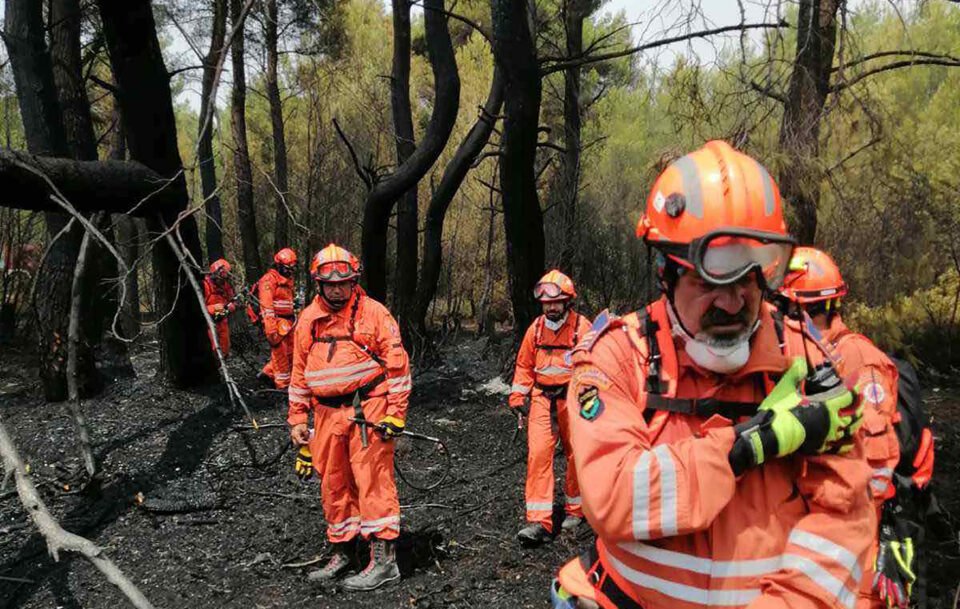 The Cyprus team in Greece on Wednesday

A mission from the fire service and civil defence arrived in Greece Wednesday morning to help bring under control fires that have reached residential areas outside Athens.

Fire service spokesman Andreas Kettis tweeted that two fire trucks with 20 firefighters as well as a 20-member team of the civil defence with their own equipment were flying to Greece.

Saying that Cyprus was standing by the Greek people, President Nicos Anastasiades tweeted early on Wednesday that “we responded immediately to the call of the Greek Government to offer assistance in the catastrophic fires”.

According to Kettis, the Cypriot mission will assist in the efforts on foot together with crews of the Hellenic fire service.  He said that the Cypriot mission, after being briefed at the service’s coordination control centre, was initially sent to the areas where the Varympompi and Thrakomakedones fires were raging. The Cypriot crew was later asked to join the operations in ‘rema tis Helidonous’ area in Kifissia where the fire had broken out again.

Greek authorities have evacuated homes as a wildfire raged uncontrolled north of Athens on Tuesday, Reuters reported. Greece saw some 81 forest fires in 24 hours as it grappled with its worst heatwave in decades, according to Deputy Civil Protection Minister Nikos Hardalias statements to reporters.

More than 500 firefighters battled the blaze on the lower slopes of Mount Parnitha, assisted by nine helicopters, seven aircraft and 305 police in a densely vegetated area in the suburbs of Varympopi and Adames.

No severe injuries or deaths have been reported so far, but several people suffered breathing problems after inhaling smoke.

“We are in a phase of absolute climatic deregulation”, Hardalias said, a day after Prime Minister Kyriakos Mitsotakis said Greece is currently in the midst of its “worst heatwave” in more than 30 years.

The extreme weather has also fuelled wildfires in Turkey and blazes in Italy, and Albania.

“In July we had 1,584 fires against 953 in 2019,” Hardalias said on Star TV, estimating that “we are no longer talking about climate change but about a climate threat”.

Hardalias added that “in the last 48 hours, we have had 116 fires” in Greece.

As forest fires continue affecting various regions in the Mediterranean and the Western Balkans, the European Commission said it was “swiftly mobilising support to assist countries in limiting the spread of the fires and protect lives and livelihoods.”

Commissioner for Crisis Management Janez Lenarcic thanked Cyprus, Czechia, France, Slovenia and the Netherlands for helping other member states to fight devastating fires. The Commission said that two Canadair firefighting airplanes from France were sent to affected areas in Italy while two firefighting planes from Cyprus were supporting Greece, on top of a firefighting team to support operations on the ground. Two helicopters to support operations in Albania were to be dispatched from Czechia and the Netherlands. Slovenia is sending a team of 45 firefighters to North Macedonia. “We are working around the clock to send help as fires rage across Europe,” the Commissioner said.

All help is mobilised through the EU Civil Protection Mechanism, with co-funding by the Commission of at least 75 per cent of transport costs.

“I thank Cyprus, Czechia, France, Slovenia and the Netherlands for swiftly deploying firefighting airplanes, helicopters and a team of firefighters to support countries heavily affected by forest fires,” Lenarcic said. He added that, as several Mediterranean countries are facing fires, EUCivil Protection “makes sure that our firefighting tools in place are used at maximum capacity. This is an excellent example of EU solidarity in times of need.”

The Commission also said that these deployments come in addition to EU-coordinated firefighting operations that are currently ongoing in Turkey, as well as in Sardinia, Italy at the end of July. Satellite maps from the EU’s Copernicus Emergency Management satellite are providing further support to the emergency services to coordinate the operations, it added.