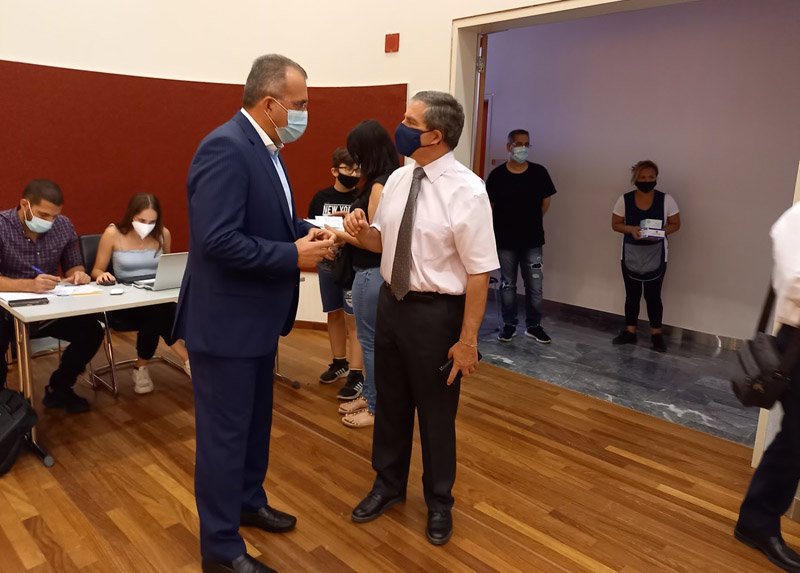 Health Minister Michalis Hadjipantelas on Thursday announced the opening of an additional ICU ward at the Nicosia general hospital expected to relieve some of the current strain, but he warned that there could not be an endless stream of new ICU beds to cope with the pandemic and urged more vaccinations to prevent serious illness and hospitalisations.

The minister was speaking on the first day of operation of the walk-in vaccination centre at the new campus of the University of Cyprus, during which he praised the youths who were getting jabbed.

He said there are many patients in their 40s treated in the ICU for coronavirus, who have children and some of them are underage.

“Right now, there is a person in the ICU, who is 46 and has four underage children,” Hadjipantelas said. Other patients treated in the ICU include two other men, 40 and 42, who have two children.

“While the patients are fighting [for their lives], there is a family behind them worrying…if they had had the jab, we would not have this problem. And this is what their relatives are saying right now,” he said and reminded everyone that vaccination is the only way that has been proven to prevent serious illness.

Citing the surge in hospitalisations, especially among the unvaccinated, Hadjipantelas said the new ICU will provide ten additional beds, while there is a plan for another 12 beds.

However, the minister warned there cannot be countless ICUs, and that hospitals must also treat non-coronavirus patients as well.

“At the same time there are other residents who have other health issues, like cancer and heart patients, who might need the services of intensive care,” he said.

A total of 236 non-coronavirus cases were referred from state to private hospitals since the pandemic, including 28 patients that needed intensive care treatment. Early on Thursday, a 26-year-old woman with a serious health issue was transferred by air-ambulance for treatment in Germany.

“We must all get vaccinated so we do not fill all the ICUs.”

The importance of vaccination was reiterated by UCY’s rector Tasos Christofides, who asked people to “listen to the numbers” saying that 90 per cent of the hospitalisations concern unvaccinated people.

The university has announced it will operate with physical presence next year, and Christofides said that for that to happen “it is necessary our community to get vaccinated,” which is why a free walk-in vaccination centre was set up on campus, he said.

The rector added that our freedom is important but cannot exist if we are not healthy.

In light of the new academic year, the health minister said he did not want to make any announcement and that he will discuss “in detail” the operation of universities and secondary education with the education ministry.

So far, 12,944 people were vaccinated in the various walk-in centres across Cyprus, health ministry permanent secretary Christina Yiannaki said in her own statements to the media.

Another 6,200 vaccinations were scheduled for Thursday in walk-ins and vaccination centres nationwide, she said. Walk-ins will also operate from Friday for non-Gesy beneficiaries.

According to Yiannaki, after the expansion of the vaccination programme for children aged 12 to 15, a total of 981 children also received the jab.