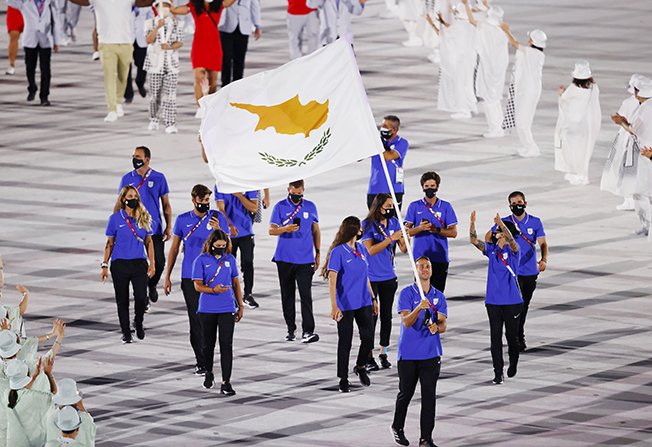 Cyprus at the 2020 Olympics

Cyprus enjoyed a successful Tokyo Olympics, with the 15-strong athlete delegation giving some very good performances, despite returning home without a medal.

The best-placed finishes were by Pavlos Kontides, who came fourth in sailing’s laser category, and Andri Eleftheriou who ranked seventh in skeet shooting.

Two other athletes were only one step away from the top eight – George Achilleos in skeet, after finishing ninth, and Marios Georgiou who was competing in the men’s artistic gymnastics individual all-around and also ranked ninth.

Nine of the athletes had previously participated in Olympic Games while for six it was their debut at the global sporting extravaganza.

Achilleos and Andreas Kariolou in windsurfing’s RS:X participated for the fifth time while for track and field athlete Eleni Artymata, Tokyo was her fourth Games.
Kontides began the Games in brilliant form and was ranked in first place for the opening three days.
A severe penalty for pumping cost Kontides dearly on the fourth day of action, as he finished that race in 24th position and was unable to make up the difference in the medal race, finishing fourth overall. Clearly disheartened, Kontides, who won Cyprus’ only ever medal (silver) at London 2012, said fourth felt like he received the ‘wooden’ medal.

Kariolou meanwhile ranked 12th in the RS:X, improving his position from the previous Games in Athens (2004) and Beijing (2008) where he finished 13th.

Eleftheriou produced her best ever Olympic performance, ranking seventh with a score of 119/125 discs. Andreas Makris meanwhile ranked 28th out of 29 scoring a low 117/125 discs.

Artymata meanwhile finished fifth in her women’s 400m semi-final on Wednesday with a personal best time of 50.80 seconds.
Although she did not qualify for the final, Artymata’s effort was a new Cypriot record, breaking her own mark of 51.14 set in 2018.
She finished as the third best European in the event, with her performance enough to qualify her for next year’s World Athletics Championship in Eugene Oregon in the United States.

Apostolos Parellis in the men’s discus throw ranked 16th while flagbearer Milan Trajkovic in the men`s 110m hurdles hit the last two barriers in his semi-final to be eliminated.

Two siblings, Kalia and Nikolas Antoniou, made their first appearances in the Olympics at 21 and 17 years of age respectively. Their performances in the swimming pool were close to the national records and they leave Tokyo with great experiences.

Unfortunately, cyclist Andri Christoforou had the worst experience after being hit by the Austrian delegation’s car in the women’s road race, meaning she finished outside the permitted time limit.

Finally, Georgiou, who was the first Cypriot athlete in action in artistic gymnastics, had three falls from the pommel horse and ranked ninth in the horizontal bar.

So with the Games ending on Sunday, Cyprus can reflect on several fantastic performances as attention will now focus on Paris in three years.