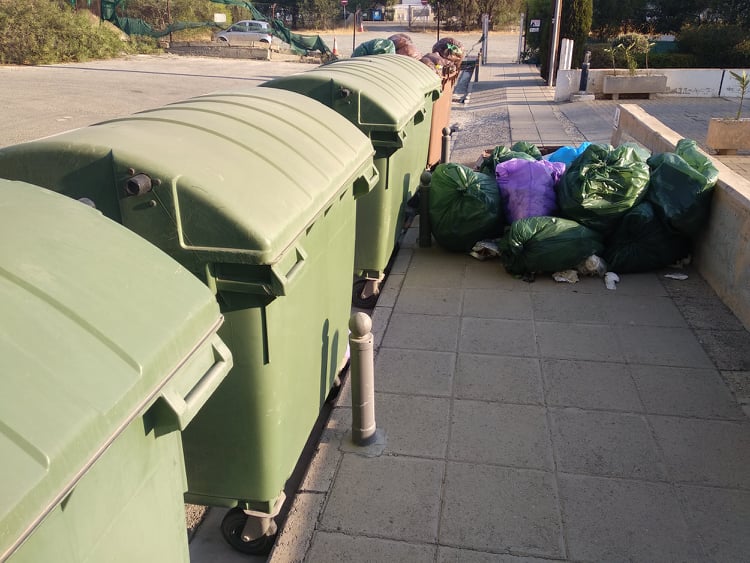 Thousands of residents in Aglandjia are not following the municipality’s pay-as-you-throw system, resulting in dozens of trash bags piling up in different areas every day, mayor Andreas Constantinou has told the Cyprus Mail.

Aglandjia is the first municipality to adopt the pay-as-you-throw scheme, lifting the annual waste management charge for its residents. Instead, people buy specific purple bags, at €2 each, to dispose of their non-recyclable trash in a bid to promote recycling.

To prevent just anyone from throwing unsorted rubbish in any old trash bags, the municipality also put a lock on the 1,157 outdoor dumpsters that are for shared use for apartment blocks, distributing keys only to their users.

But residents who might not have a key to unlock the bins, or who simply cannot be bothered to unlock the dumpsters, end up leaving unsorted bags of rubbish next to them, Aglandjia’s mayor Andreas Constantinou told the Cyprus Mail.

“But you see this everywhere, in all the municipalities,” he said.

Keys for the garbage containers are given to apartment owners or tenants, companies and/or workers in apartment buildings, as well as to student hall residents.

“All the green garbage containers are numbered, so we know at any point to which street they belong,” the mayor said.

House owners are not usually given keys for the large dumpsters, instead they are expected to separate their trash in the appropriate bags and take them out to be picked up by waste collectors on the assigned days.

Another issue is that although the containers for recycling are not under lock and key, some of the bags found lying around across the municipality contain recyclable materials said Constantinou.

“Green dot [NGO in charge of recycling] is very strict with its regulations so if the bag contains anything that cannot be recycled or should not be recycled with the materials in the bag, they don’t pick them up,” Constantinou said.

But the mayor admitted that there is a significant portion of people who “do not respect the place they live in” and have failed to cooperate with the scheme even eight months after its implementation in January.

“We know of specific establishments and in the last seven months we have also identified and contacted some 4,500 residents to ask them to comply with the scheme,” Constantinou said. The number is considerable since Aglandjia has fewer than 25,000 residents according to the latest demographic figures.

People who are found fly-tipping in Aglandjia first receive a verbal warning while the municipality issues a fine the second time they are caught, the mayor explained.

To maintain the municipality clean, two crews patrol the area during weekdays and pick up garbage bags from the roads or fields.

“The scheme offers more benefits than negatives. We made the start and we constantly work on ways to perfect the scheme,” the mayor added.

Since the scheme’s implementation, Aglandjia municipality holds the highest recycling percentage, increased by 27 per cent compared with last year, while the municipality saw a 40 per cent reduction on waste. The pay-as-you-throw scheme should have been introduced islandwide by now, but legislation is still pending at the House of Representatives.

Sources within the municipality informed the Cyprus Mail that there are thoughts to reintroduce an annual charge for waste management and lower the price of the purple municipal trash bags as another means of limiting those who take advantage of the scheme.

Meanwhile, the municipality is working towards supporting those who receive financial support from the social welfare services, as they are eligible for compensation on their annual waste management bills.

“Since our residents do not pay annually and we have the bag system, a way needs to be found to compensate those people,” Constantinou said

The municipality has already distributed for free €100,000 worth of bags to needy families.

Our View: Inmates’ clash with police raises questions over running of prison