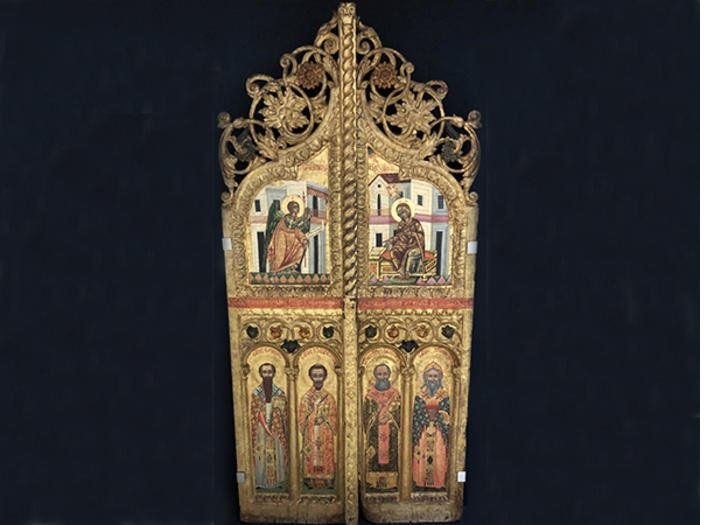 In one of the most complex cases to date, according to the antiquities department, the royal iconostasis doors of the church of Ayios Anastasios from Peristeronopigi village in the north have been repatriated from Japan.

The department said the 18th century doors have been returned to Cyprus after years-long efforts that were intensified during the last two years, concluding “one of the most complex cases of repatriation”.

“The looting of the church of Ayios Anastasios… and the sale of the royal iconostasis doors, as well as of the icons and sacred vessels of the church, the fate of which remains unknown, reveals once again the catastrophic consequences of the Turkish invasion on the cultural heritage of Cyprus,” the department said.

According to the inscription, the royal iconostasis doors were painted by the Monk Filaretos from Psimolofou, who became Protosyncellus in the Monastery of Ayios Iraklidios in Politiko, an important iconographic centre of that period.

The doors were made at the expense of Hatzigiasoumis, probably a resident of Peristeronopigi village, during the time when Chrysanthos was archbishop and Leontios was abbot (Egoumenos).

“On the authority of Lord Chrysanthos, the late Leontius the Hieromonk, at the expense of Yasoumos the pilgrim. Hand of Filaretos and the hieromonk,” the inscription reads.

The case dates back more than ten years. The reason according to the church is that national law in Japan does not oblige the person in whose possession an artefact has been found to return it to its legal owners if the last transaction in the chain is deemed legal.

A representative of the Church of Cyprus, who travelled to Japan to request the return of the doors, met with representatives of the Kanazawa College of Art but despite providing evidence of their origin and their illegal removal, he was unable to persuade the college authorities to repatriate the doors, according to church records.

“The case was assigned to a Japanese lawyer who, having studied the case, informed us that there is no legal basis on which to demand the return of the sanctuary doors which, under Japanese law, were legally purchased and are thus legally owned,” the church said in 2011.

The antiquities department on Wednesday expressed its gratitude to the Church of Cyprus and especially to the archbishop, “whose support and contribution towards the repatriation efforts was invaluable”.

“The doors will be conserved by the department and will be handed over to the Archbishopric, until their return to the church of Ayios Anastasios, where they belong, is made possible,” the department said.