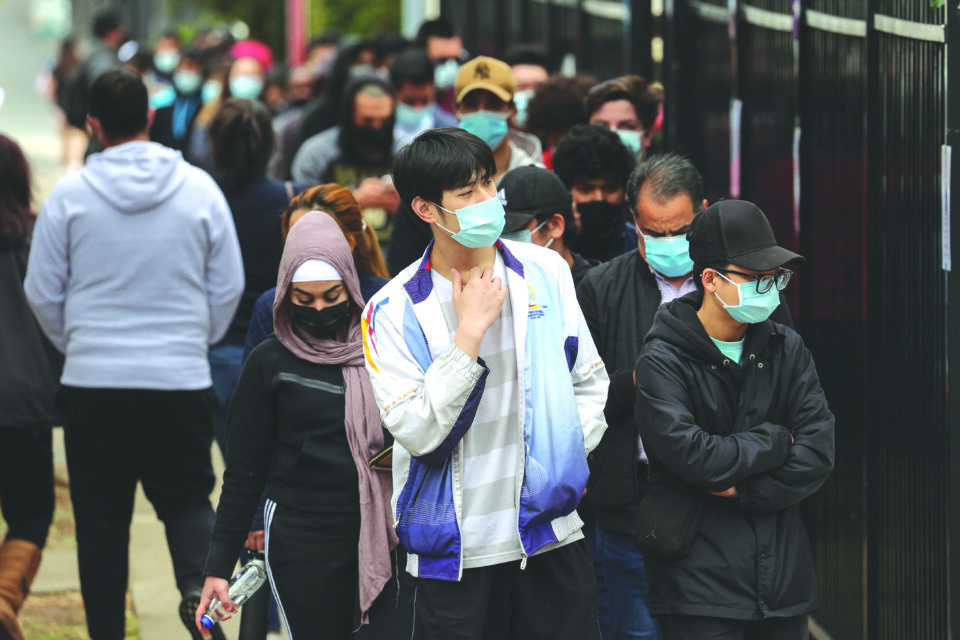 People wait in line outside a coronavirus disease (COVID-19) vaccination clinic in the Bankstown suburb during a lockdown to curb an outbreak of cases in Sydney, Australia

Sydney’s COVID-19 infections hit a daily record on Wednesday, putting parts of the health system under pressure, officials said, calling for vaccinations to be stepped up to stem the tide of hospital admissions.

“This highlights … the fact that vaccination is the key. We need to increase those vaccine coverage levels,” NSW Chief Health Officer Kerry Chant said during a televised media briefing in Sydney, the state capital.

Australia, grappling to control a third wave of the coronavirus, has locked down more than half of its 25 million population, including its largest cities, Sydney and Melbourne, and is accelerating an initially sluggish vaccine rollout.

Around 31% of people aged over 16 have been fully vaccinated, while 54% have had at least one dose.

Westmead Hospital, one of the largest in Sydney’s hard-hit western suburbs, has reduced ambulance arrivals for COVID-19 patients for 24 hours and shifted critical patients to other hospitals, an internal note shared on Twitter by NSW lawmaker Cate Faehrmann showed.

Asked about the changes, state Health Minister Brad Hazzard acknowledged the health system is working under pressure but said the situation is still manageable.

“Westmead Hospital is typical of the sorts of pressures you would expect when you got a major hospital in the middle of the epicentre of the virus outbreak,” he said. Around 80% of cases have been detected in Sydney’s west.

In neighbouring Victoria, new cases fell for a second straight day to 45, down from 50 a day earlier, as officials sought to boost the vaccine rollout by allowing anyone over 16 to book an appointment from Wednesday.

The spike in cases comes as Australia’s federal government pressed states to stick to a four-stage national reopening plan https://www.reuters.com/world/asia-pacific/sydney-under-strict-new-lockdown-rules-cases-soar-2021-07-29 agreed last month, as some have suggested delays given the persistently high new daily case numbers in Sydney.

Treasurer Josh Frydenberg warned state leaders on Wednesday that current emergency economic supports may be withdrawn when the country hits a 70%-80% COVID-19 vaccination rate, even if states and territories decide to retain border controls.

“There should be no expectation on behalf of premiers and chief ministers that our emergency economic support will continue at the scale that it is currently,” Frydenberg told broadcaster Seven News.

Despite the recent Delta outbreaks, Australia’s coronavirus numbers are still relatively low, with just over 46,600 cases and 986 deaths. Deaths from the latest outbreak have risen to 76, although the death rate has slowed from last year.

Virus-free Queensland said it would pause arrivals from NSW and Victoria states, and the Australian Capital Territory for two weeks from Wednesday to help ease pressure on its hotel quarantine system.