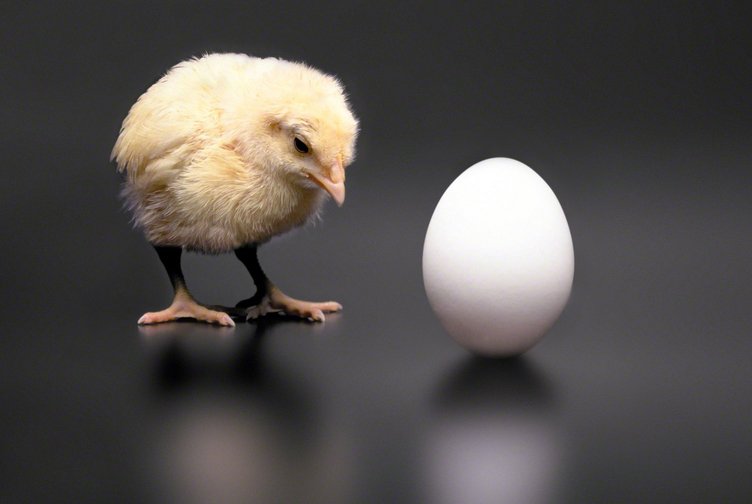 The beguilingly simple question, “Which came first, the chicken or the egg?” has vexed philosophers for thousands of years. In fact, the egg causality dilemma evokes questions of how life and the universe in general began.

Aristotle (384-322 BCE), the ancient Greek philosopher and scientist whose works shaped centuries of philosophy from Late Antiquity through the Renaissance, concluded that this was an infinite sequence, with no true origin. Four centuries later, Plutarch (a Greek writer and philosopher known for his biographical works Parallel Lives – a series of biographies of illustrious Greeks and Romans), highlighted this question as bearing on a “great and weighty problem, whether the world had a beginning.” By the end of the 16th century, the Christian world resolved the chicken-egg pickle, based on the Book of Genesis. In describing the creation of animals, the first book of the Hebrew Bible and the Christian Old Testament allows for a first chicken that did not come from an egg. Hinduism and Buddhism believe there is a wheel of time, meaning that there is no first in eternity. Time is cyclical. There is no creation, so neither the egg nor the chicken came first. Pre-Socratic Greek philosopher Anaximander (c. 610-c. 546 BCE), suggested that species evolve over time, and thus chickens had ancestors that were not chickens; evolutionary biology provides the same answer to the paradox.

Cultural references to the chicken and egg intend to point out the futility of identifying the first case of a circular cause and consequence. Perhaps in this approach lies the most fundamental nature of the question. A literal answer is somewhat obvious, as opposed to the logical fallacy of the metaphorical view, which sets a metaphysical ground on the dilemma. In my opinion, the question should read, “Which came first, X that cannot come without Y, or Y that cannot come without X?” This question reformulation will allow one to understand its metaphorical meaning.

An equivalent situation arises in engineering and science known as circular reference, in which a parameter is required to calculate that parameter itself. Examples are Van der Waal’s equation, and the famous Colebrook equation.

There are many real-world examples in which the chicken-or-egg question helps identify the analytical problem. Graduates cannot get a job because they have no work experience, and are unable to acquire that experience, as no one will hire them in the first place (a Catch-22 situation). Companies find it difficult to introduce new consumer media formats, such as audio recording formats – most consumers will not buy players for the format until there are many recordings to play on those machines, but record companies will not offer most of their recordings in the new format until many customers have the players. The same scenario applies to video recording formats, video game console systems, and computer systems. An actor cannot join the actor’s union unless he/she has played a role in a union film, but a non-union actor cannot get a role in a union film because he/she is not part of the union. In the popular Christmas song, it mentions that “The Snowman brings the snow,” but how did the Snowman originally get there?

Independent researcher and reality theorist, Christopher Michael Langan, developed a Cognitive-Theoretic Model of the Universe. He tackles the venerable chicken-and-egg problem in one of the philosophical essays in his book, The Art of Knowing. For someone who lays legitimate claim to having the highest IQ of anyone in the United States of America, Langan argues that the egg came before the chicken. However, the real importance of the question has faded since Darwin’s On the origin of Species and the accompanying Theory of Evoloution, under which the egg must have come first.

In recent years, British scientists claimed to have solved one of the greatest mysteries in life with the use of a supercomputer called HECToR. Looking at a chicken eggshell in detail, they were able to determine the vital role of a protein used to kick-start the egg’s formation; a protein found only within a chicken. Therefore, the chicken came before the egg.

Admittedly, age-old questions have always fascinated me. Why do we sometimes experience the déjà vu effect? Why do cats often stare at nothing? Are zebras black or white? What are the spots that appear when we look at bright light? Finally, which came first, the chicken or the egg? You decide.

200 kilos of rubbish collected from seabed, beach in Dhekelia area