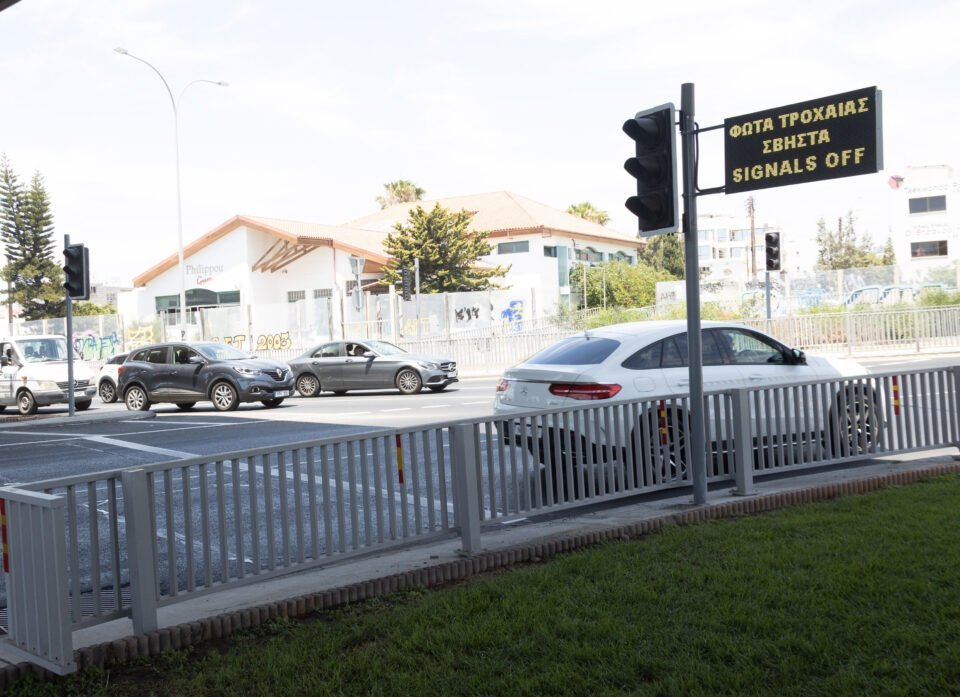 The new 'smart' lights at the Ayia Fyla roundabout

While public reaction to the island’s first smart traffic light system at the busy Ayia Fyla roundabout in Limassol has been mixed, the transport ministry is delighted, saying it has cut journey times by 50 per cent overall.

“From day three of the new system being in operation we saw a reduction in travel time by 50 per cent which consequently reduced the queues observed at the roundabout,” Alexis Avgoustis, engineer at the public works department of the ministry told the Cyprus Mall.

“The first days were indeed difficult because the simulation had to be conducted on the basis of existing data which guided how the system was set up,” he said of the system which was introduced in the middle of June.

The sensors record traffic, detect loads and number of vehicles waiting in line and then configure the separation in the phases of the traffic lights accordingly, including duration of the green light for incoming traffic. The ultimate aim of this system is to have the optimal traffic flow at the roundabout.

“The aim of the system is to balance the waiting times of vehicles entering the roundabout and avoid long queues and delays observed in specific parts of the roundabout.” 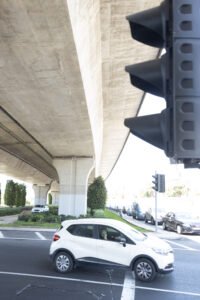 He said that drivers’ comments were both positive and negative, as drivers had to adjust to the new system.

“Most of the negative comments, predominantly on social media, were expected, as it is more likely for someone to vocalise their displeasures than make note of any improvements,” Avgoustis said. “Beyond the comments, we study the data collected by the system which provides objective information on how the roundabout operates.”

“The statistical data have confirmed our model’s predictions which showed notable reductions in travel time and traffic flow.”

The data says the biggest change has been experienced by drivers coming from the north to the south during the morning rush hour, which was the biggest headache at the roundabout in the first place.

“Travel time has been reduced by 73 per cent, since before the operation of the traffic light system the average travel time was 35 minutes and it has now been cut to approximately 9.5 minutes,” Avgoustis said.

In terms of drivers coming from the city centre during lunch time and during the afternoon towards the roundabout, meaning from the south to the north, travel time has been reduced to around 9 minutes from the original 20 minutes, a 55 per cent decrease.

The engineer conceded that all the studies have taken place during the quieter summer season and things may change with September looming and the start of the new school year.

“In September, with the start of the new school year and the expected increase in traffic during the morning and afternoon rush hours, we plan to readjust and recalibrate the system to thoroughly optimise its functionality,” he said.

The system’s settings will continue to take into account the data collected with the aim of achieving the maximum possible return, which the department estimates at 57 per cent reduction overall.

But the function of the smart system is not just about improved traffic flows. Following traffic lights also takes what can be stressful decision-making off a driver’s shoulders and improves road safety. Trying to squeeze onto a roundabout clogged with cars coming from the right is often a split-second decision that does not always end well.

Such was the experience of one driver, Pavlos Stephanou.

“The main difference from before for me was seeing cars driving towards me from my right stopping at a red light while going around the roundabout, something you don’t usually see in Cyprus unless the traffic is so dense it clogs the entire roundabout,” he said. “This removed the usual decision-making process as this was now structured and regulated by the traffic lights.”

Because he usually travels from east to west or vice versa over the roundabout, the benefits of time saving were not so marked.

“The entire process may have taken me 30 seconds longer than usual, but the possibility that other drivers, particularly those driving from the north to the south and vice versa may benefit at the expense of a short delay elsewhere, seem like a step in the right direction.”