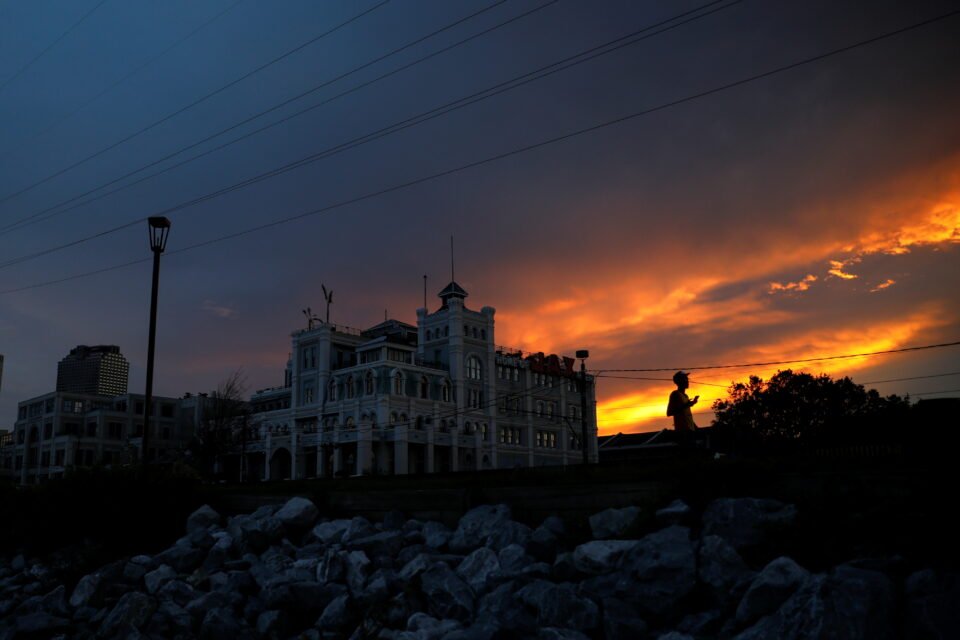 A man walks at sunset during a blackout in the city after Hurricane Ida made landfall in Louisiana, in New Orleans, Louisiana, U.S. August 31, 2021. REUTERS/Marco Bello

South Louisiana braced for a month without electricity and reliable water supplies in the wake of Hurricane Ida, one of the most powerful storms ever to hit the U.S. Gulf Coast, as people faced suffocating heat and humidity.

The storm killed at least four people, officials said, a toll that might have been much larger if not for a fortified levee system built around New Orleans after the devastation of Hurricane Katrina 16 years ago. (Graphic of Hurricane Ida hitting Gulf Coast https://tmsnrt.rs/3yrcULP)

By early Tuesday, about 1.3 million customers were without power 48 hours after the storm made landfall, most of them in Louisiana, said PowerOutage https://poweroutage.us, which gathers data from U.S. utility companies.

Compounding the suffering, the heat index in much of Louisiana and Mississippi reached 95 degrees Fahrenheit (35 degrees Celsius), the National Weather Service said.

“We all want air-conditioning … Even if you have a generator, after so many days they fail,” said Louisiana Governor John Bel Edwards.

“Nobody is satisfied” with the estimate that power might not be restored for 30 days, he added, expressing hope that the 20,000 line workers in the state and thousands more en route could finish sooner.

President Joe Biden offered federal help in restoring power during a call with Energy Secretary Jennifer Granholm and the chiefs of two of the Gulf Coast’s largest utilities, Entergy and Southern Co, the White House said.

At Ochsner St. Anne Hospital southwest of New Orleans, 6,000-gallon tanker trucks pumped fuel and water into tanks to keep its air-conditioning running. The medical center closed to all but a few emergency patients.

New Orleans’ restaurants, many shut ahead of the storm, also face an uncertain future because of a lack of electricity and facilities, reviving memories of the difficulties that plagued businesses for weeks in the wake of Katrina.

“This is definitely feeling like Katrina,” said Lisa Blount, a spokesperson for the city’s oldest eatery, Antoine’s, which is a landmark in the French Quarter. “To hear the power is potentially out for two to three weeks, that is devastating.”

Even the power generators were hazardous. Nine people in St. Tammany Parish northeast of New Orleans were taken to hospital for carbon monoxide poisoning from a gas-fueled generator, media said.

Roughly 440,000 people in Jefferson Parish south of New Orleans may be without electricity for a month or more after utility poles toppled, Councilman Deano Bonano said, citing comments by power officials.

“The damage from this is far worse than Katrina, from a wind standpoint,” Bonano said in a telephone interview.

Among the four dead were two killed in the collapse of a southeastern Mississippi highway that critically injured 10 more. One man died attempting to drive through high water in New Orleans and another when a tree fell on a Baton Rouge home.

Swampy areas south of New Orleans took the brunt of the storm. High waters finally receded from the highway to Port Fourchon, Louisiana’s southernmost port, leaving a trail of dead fish. Seagulls swarmed the highway to eat them.

Port Fourchon suffered extensive damage, with some roads still blocked. Officials were only letting through emergency responders to Grand Isle, a barrier island in the Gulf of Mexico. It could take weeks for roads to be cleared, they said.

A line of cars stretched at least a mile from a gas station stocked with fuel in Mathews, a community in Lafourche parish.

More than half the residents of Jefferson Parish rode out the storm at home, Bonano said, and many were left with nothing.

“There are no grocery stores open, no gas stations open. So they have nothing,” he said.

The weakened remnants of the storm dumped heavy rain in neighboring Mississippi as it traveled toward Alabama and Tennessee. Heavy rainfall and flash flooding were possible on Wednesday in the mid-Atlantic region and southern New England, forecasters said.

Sheriff’s deputies in St. Tammany Parish, Louisiana were investigating the disappearance of a 71-year-old man after an apparent alligator attack in the flood waters.

The man’s wife told authorities that she saw a large alligator attack her husband on Monday in the tiny community of Avery Estates, about 35 miles (55 km) northeast of New Orleans. She stopped the attack and pulled her husband from the water.

His injuries were severe, so she took a small boat to get help, only to find her husband gone when she returned, the sheriff’s office said in a statement.

Lebanon’s experts warn of increase in violence amidst social decay

Biden says Afghanistan exit marks the end of US nation-building