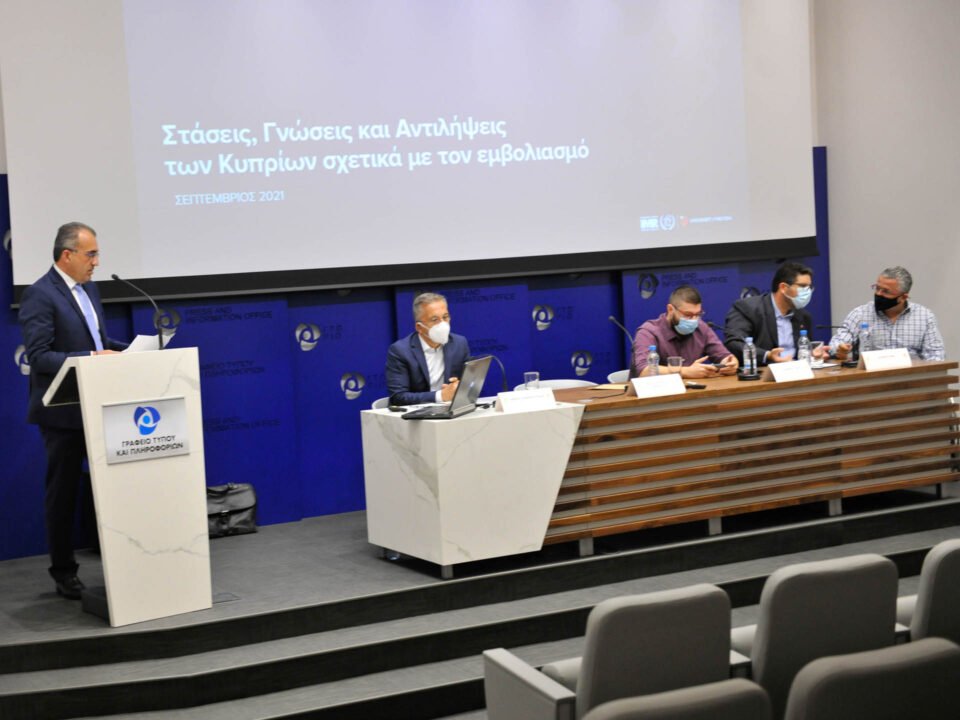 The Minister of Health, Michalis Hadjipantelas, together with Professor Constantinos Phellas, Dr Constantinos Tsioutis and Dr Christos Petrou, at a press conference to present the results of a survey titled “The ‘beliefs’ of the people of Cyprus on vaccination” (PIO)

Though a large part of the population in Cyprus has been vaccinated there are still fears among many when it comes to the jabs, some understandable but others that derive from misinformation and conspiracy theories, are baseless, the findings of a study, released on Friday, said.

The study, on what Cypriots believe about the Covid vaccination, was prepared by IMR/University of Cyprus in cooperation with associates of the Federation of Patients’ Associations (Osak) and members of the government scientific team.

Health Minister Michalis Hadjipantelas, who addressed the presentation of the study, said the findings confirm the speculated divisive tendencies in Cypriot society in relation to vaccines and vaccination. “However, a significant number (39 per cent) of the more than 2,000 participants say that they have no problem with those who disagree with their point of view as they consider it a human right to do as one thinks best of oneself,” the minister said.

A more general conclusion from the study, he added, was that though the majority of people may have been vaccinated, there are still fears, “some of which could be described as valid, but also fears that have as a starting point the phenomenon of conspiracy theories and misinformation.”

In total 2,038 people over 18 randomly chosen were screened. According to the findings, 86 per cent of respondents (around 1,750) said they had been vaccinated. Six per cent were categorical they would not get the jab. Most were not sure what they would do yet.

The main reason why those who remain undecided as to whether they will get the jab, is the speedy development of the vaccines, the study said. People expressing concern about getting vaccinated also said that this was because jabs can cause blood clots and thrombocytopenia, as well as myocarditis. Almost four in 10 said they were not sure what to do citing the possibility of the vaccine causing death. One in three said vaccines could cause allergic reaction while one in four said vaccines can affect fertility.

As regards those flat-out refusing the vaccine, most, 77 per cent said it was because they did not trust the government and how it has been handling the pandemic through vaccination, followed by ‘I’m not convinced that vaccination will generally bring the desired results’ (71 per cent), and that ‘there is a lot of discussion and disagreement between scientists about vaccines’ (63 per cent). Sixty per cent said they do not trust those who claim to be pandemic experts, while half said they believe the virus was manufactured and that the vaccine has been created to serve interests.

Around 42 per cent said vaccination was ‘an attempt to completely control and suppress our freedoms by the state’. The same percentage expressed reservations over possible permanent damage through the new mRNA technology used in two of the vaccines while 41 per cent said it was because it could cause death.

Other reasons people cited for their hesitancy to get the jab was because they preferred alternative treatment methods (36 per cent), stress from the thought of a new vaccine (14 per cent), purely personal religious reasons (13 per cent), fear the new technology would change their DNA (9 per cent) and due to a health condition and lack of recommendation by their GP (5 per cent).

Most of those who were convinced to get vaccinated said it was because they believe the virus is a serious threat to global health, and that they trust the experts, science and doctors in this fight against the pandemic. Only four per cent of those vaccinated said they did so to avoid getting tested every 72 hours.