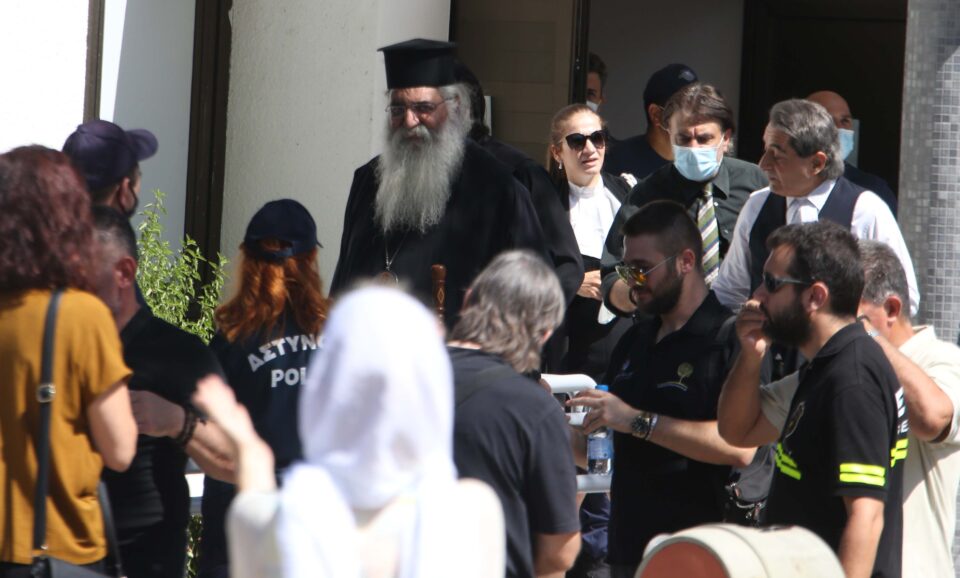 The Morphou Bishop exiting court over another case (Christos Theodorides)

The Holy Synod should take a stance on bishop Morphou Neophytos, a theologist said on Friday, saying the former’s statement that he got coronavirus after praying to the Mother of God was blasphemous.

“It is unacceptable to associate God with diseases and it is not me saying it but the gospel,” theologist Andreas Pitsilides told AlphaNews on Friday.

He was commenting on what the bishop said during a sermon on Thursday, following his recovery after testing positive to Covid-19 on August 16.

“As you know, I got sick, but as you can see, I am alive,” the bishop, who has not received an anti-coronavirus vaccine, said.

He claimed that he asked the Mother of God to infect him with the virus so people do not think he is untouchable.

“Instead of people believing that I am a superman or a saint, give me some coronavirus,” Neophytou said he asked the Mother of God during prayer.

The illness was “very very mild, like the Mother of God gave me some time to rest,” Neophytou said, adding that his “voice and legs are renewed”.

The bishop isolated for two weeks and displayed mild symptoms. He was treated by doctors he ‘trusts’, including controversial epidemiologist Elpidoforos Soteriades.

“We can express our opinions,” the theologist said, but to put them on to the Mother of God and God “this is not sin, it is blasphemy”.

Pitsilides disagreed with the fact that God gives diseases to people and asked “who is the metropolitan of Morphou that the Virgin Mary listen to what he asks?”

He added that since the bishop believes coronavirus is a human-made illness, does he also think that the Virgin Mary is also part of this “global conspiracy trick”?

The theologist said that it is “inconceivable to tell people not to get vaccinated”, referring to how the bishop said in a previous sermon that he will not get the vaccine because he does not want to turn into a genetically modified product.

Saying the bishop was more measured in the past, Pitsilides added that he should have asked God for more prudence or “at least to speak less”.

Neophytos has repeatedly expressed opposition to the vaccine, despite the Holy Synod encouraging the faithful to get inoculated.

According to Pitsilides, the holy synod should take action on the issue of the bishop, since all its members should share a similar position.

“The church should unite not divide. It is now a collective matter for the church to find the time to deal with one of its members,” Pitsilides said.

He also explained the etymology of the word synod, meaning “companion” in English, corresponding that its members should be “together on the same road”.

“Either they all accompany Morphou or Morphou is not a member of them,” he said.

The bishop had tested positive a day after attending a church service in the small community of Tris Elies, sparking distress among locals who rushed to get tested. The service was attended by some 120 people inside the church and others outside.

None of the people, around 66, who came into direct contact with him tested positive in the immediate aftermath.