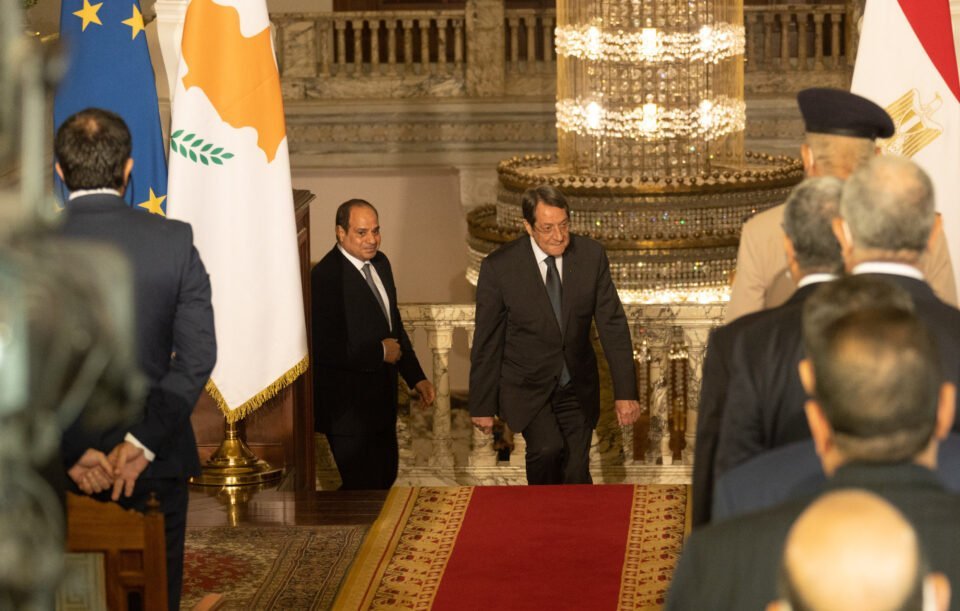 President Nicos Anastasiades, and the President of Egypt, Abdel Fattah el-Sisi, make statements to the press in Cairo on Saturday (PIO)

The first Intergovernmental Summit between Cyprus and Egypt was described as “historic” by President Nicos Anastasiades who laid the groundwork for closer ties on Saturday with  his Egyptian counterpart Abdel Fattah el-Sisi.

Following the meeting, it was announced that a Memorandum of Understanding (MoU) for the electricity interconnector between the two countries is to follow soon as well as one on renewable energy sources.

Anastasiades, accompanied by the ministers of foreign affairs, defence, energy, education and the deputy minister of shipping, arrived in Cairo in the morning for the first Cyprus-Egypt intergovernmental summit, which he said reaffirmed the excellent relations and synergies the two countries and focused on discussions of expanded forms of cooperation.

“It is the first to be held between the two countries, reaffirming not only the greatness of our relations, but also the common will on the one hand to substantively strengthen the already rich framework of cooperation and on the other, to further upgrade and strengthen our political and economic ties,” Anastasiades said after the deliberations.

He added that in the field of trade, the two sides agreed that business forums ought to be organised at regular intervals to strengthen the ties of respective chambers of commerce, with the aim of increasing trade, services but also goods, especially pharmaceuticals and aquaculture products.

With regard to energy, instructions were given to speed up the work of the joint committee set up for the implementation of the intergovernmental agreement for the construction of an underwater gas pipeline, as well as the EuroAfrica interconnector. It is also expected that an MoU for the Cyprus-Egypt electricity interconnector will be signed within the month, while a tripartite Egypt-Cyprus-Greece MoU is to be signed to promote the electricity interconnection of the three countries through the EuroAfrica Interconnector project.

Energy Minister, Natasa Pilides said electricity interconnection with Egypt will ensure the energy security of Cyprus, and it will offer mutual benefits to both states regarding the promotion of renewable energy sources and the efforts made worldwide to reduce pollution and limit the negative impact of climate change.

The technical discussions are expected to be completed in September. Pilides extended an invitation to her Egyptian counterpart, Mohamed Shaker El-Markabi, to pay an official visit to Cyprus to sign the MoU.
Sisi, in his comments, said the intergovernmental meeting was “an important step in the framework of the joint commitment to strengthen relations, but also to monitor the progress made in the development of bilateral relations.”

He expressed the belief that these would be beneficial for the two countries in terms of their relations in all sectors.

He also announced that further steps were agreed for the strengthening and further development of Cyprus-Egypt bilateral relations, at many levels, such as in the fields of defence and economy, but also beyond the bilateral level, issues were discussed within the framework of cooperation mechanisms with Greece.

A first glimpse of artists in process