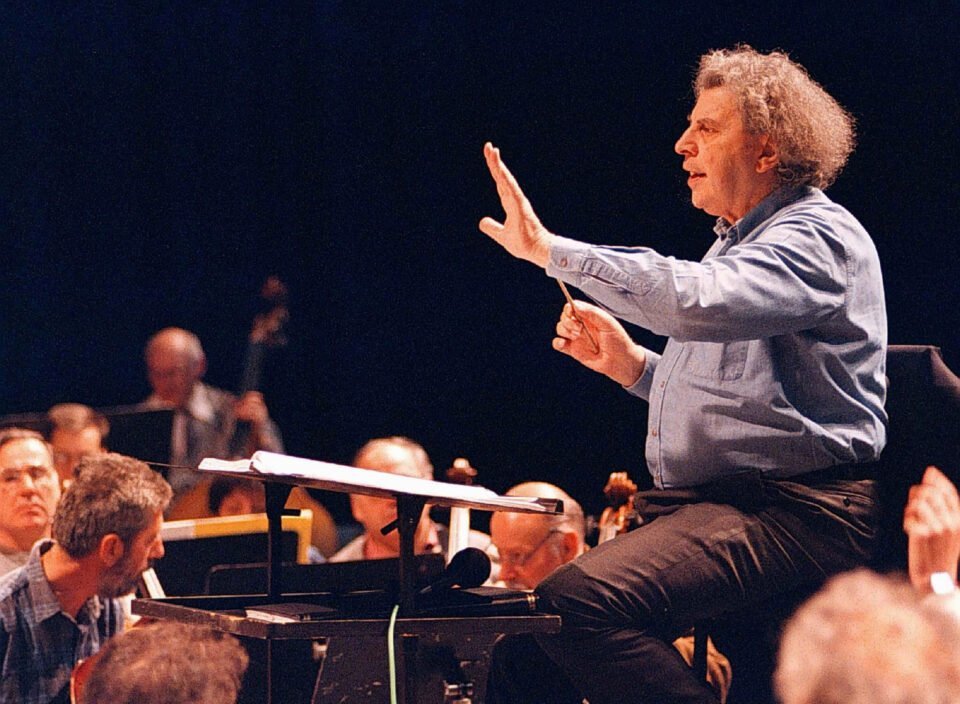 In the music for the film Zorba the Greek, Mikis Theodorakis, who died last week aged 96, produced a masterpiece that married music and character to perfection.

Zorba, “Damn it boss, I like you too much not to say it.

You’ve got everything except one thing – madness!

Basil, “Teach me to dance, will you?”

Zorba,“Dance. Did you say dance?”

And off they go, Anthony Quinn and Alan Bates, Zorba and Basil, action man and shy intellectual, dancing slow and then fast and faster and then frantically to the famous Zorbas crescendo, bonding and dancing and cutting the rope and breaking free as the rhythm and the music engulfs their friendship completely. They don’t make films and music like that anymore!

Alexis Zorbas is the larger-than-life existentialist master of life, and Alan Bates is the intellectual narrator in Nikos Kazanzakis novel, the life and times of Alexis Zorbas.

The existentialist philosopher novelist, Albert Camus, who was awarded the prize in 1957, said he adored Kazanzakis work and told his wife that her husband deserved the honour 100 times more than himself. Coming from a great writer and thinker like Camus that was some compliment – better than winning the prize itself.

Both Camus and Kazanzakis were exponents of existentialist thinking, which was very fashionable after World War II and influenced those of us lucky to have been young when the world broke free to the sound of Theodorakis music. All one needed to understand existentialist philosophy was to see Alexis Zorbas portrayed by Anthony Quinn and read the novels of Camus and Kazanzakis.

The film’s director was the Greek Cypriot Michael Cacoyannis from the well-known legal family in Limassol who gave up the law for the theatre and directing thespians in their craft.

Anthony Quinn was superbly cast for the role – I think by Cacoyannis himself. An Irish-Mexican immigrant, Quinn, who had already played a Cretan guy in Guns of Navarone, had the looks and the voice and elan of Kazanzakis’ hero – a true natural for the part.

Although the music of Zorbas dance is Theodorakis’ best known, his output was prolific and a lot more musical.  He often conducted concerts of his music and sometimes sang along in his gruff distinctive voice as he conducted.

Theodorakis’ favourite singers were Grigoris Pithikotsis and Maria Farantouri. His classic Kaimos – sorrow – was sang by both, though I also like the spontaneous audience rendition.

Maria Farantouri’s most famous Theodorakis song is the defiant To Gelasto Paidi – the laughing boy – a poem by the Irish nationalist poet Brendan Behan, whose famous quip “I am a drinker with writing problems” is wonderfully Irish.

Grigoris Pithikotsis famous song about Cyprus, Chrysoprasino Fyllo – gold-green leaf – was also composed by Theodorakis. Its lyrics are a tribute of the beauty of the island likened to a gold-green leaf cast on the sea. It serves as the unofficial national anthem for many Cypriots, rather like William Blake’s poem Jerusalem sang to music by Hubert Parry about England’s green and pleasant land, serves as England’s anthem.

One of Theodorakis’ most mellifluous songs is Sto Perigiali to Kryfo sung by Grigoris Pithikotsis from a poem by George Seferis.

“With what spirit what heart

What desire and passion

We lived our life; a mistake!

So we changed our life”

Friends from Greece told me that it is sung to mean we lived our life mistakenly and changed it, which apparently was not the meaning the poet had in mind, but no matter. It is a great song and great music from a composer whose music was an integral part of our lives last century mistaken or not.

The overexposure of politicians as leaders in public life instead of musicians and actors, comedians and writers and poets is wrong. The latter give life meaning and pleasure and joy and they, not self-seeking politicians, should have pride of place in our affections.

Theodorakis was of course very political, but he was not really a politician. His politics were on the left during a difficult time in Greece. There is a story, probably apocryphal, about his contemporary, Manos Hadjidakis, who referring to Theodorakis, said: we artists are either communist or gay; I am not communist, outing himself with wit and style a long time before it became fashionable.

Mikis Theodorakis was a communist most of his life but mellowed as he grew older and eventually became an independent member of parliament. His music was inspired by the trials and tribulations of the left and he suffered detention and torture and exile for his beliefs.

Unlike his other contemporary, Melina Mercouri, who became minister of culture and a thorn on the side of the British museum for its refusal to return the Parthenon Marbles, Theodorakis never held high office after democracy was restored in Greece in 1974 after years of political instability.

Both however produced songs I would take on Desert Island Discs – a BBC programme in which you choose eight pieces of music to take with you if shipwrecked on a desert island. I would choose Ta Pedia tou Pirea – Never on Sunday – sung in Geek by Melina Mercouri in her husky voice, and two by Theodorakis, Kaimos and Sto Perigiali to Kryfo.  I thought of adding Zorbas dance to keep me fit but on second thoughts a long daily swim would suit me better.

We are all at the mercy of hunters bent on promoting their selfish, often illegal, agendas

Tales from the Coffeeshop: The latest entry in the Book of Cyprob Fantasy