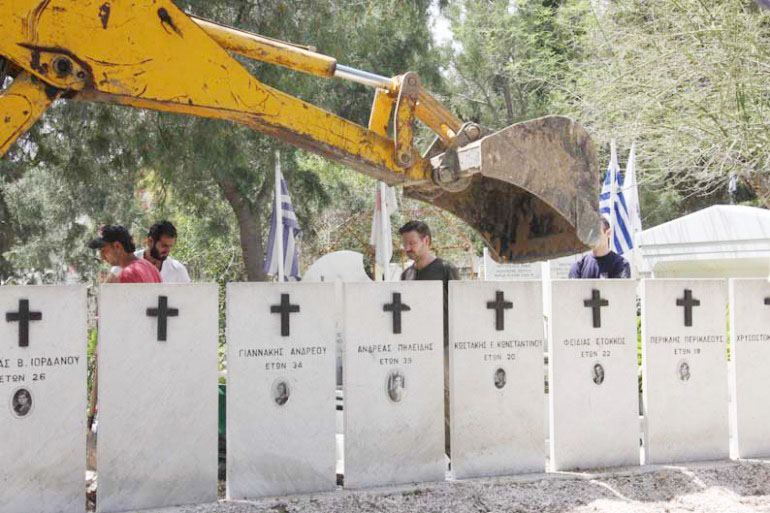 The cemetery in Lakatamia

The question is whether the Cypriot government or better, the Greek Cypriot community, has the courage to face the truth

On 15 July I had posed the question “A Truth Commission for Cyprus?”  Unfortunately, not much discussion had been generated and obviously no answer was given.

Things have perhaps now changed since the judgment of the European Court of Human Rights (ECtHR) in the case of Vassiliou a.o. v Cyprus on 31 August 2021, Application no. 58699/15.

The Respondent was found to have violated the private and family life (Article 8) of Mrs Vassiliou and her three children and awarded compensation of €45,000 plus costs.

Mr Vassiliou was a Greek Cypriot reservist who had gone missing in action during the second part of the Turkish invasion at Ayios Pavlos in Nicosia.

In fact, he had been executed by the Turkish army and his body – during an agreed ceasefire – had been collected by the National Guard and buried in a mass grave at Lakatamia military cemetery in August 1974 with marked ‘unknown’.  His family had not been informed.

In fact, it took the Cyprus government another 25 years to exhume the body and inform the family that their loved one, was not missing but actually dead and buried in Lakatamia since August 1974.

Litigation commenced before the District Court of Nicosia in 2002 which resulted in a finding of violation of the family’s human rights and there was an award for damages.

This was reversed on appeal by the Cyprus government in 2015 and that is how the case found its way to Strasbourg.  After 19 years of legal proceedings, they were vindicated.

The Court found that the Republic had a positive obligation under Article 8 (which protects private and family life) to inform them of the progress of the investigation as well as the possible death and location of his body in the mass grave in the area of Cyprus under the control of the government.

In doing so the ECtHR dismissed the Supreme Court’s reference to unnamed “political dimensions” as being a justification for the delay in exhumation.

It pointed out that the Respondent had not demonstrated an interest for this delay in investigation and information, that could outweigh that of the Applicants being informed.

What I do want to discuss is how the execution of the judgment could bring closer a Truth Commission, as already described last July.

An ECtHR judgment has three levels of execution (a) payment of just satisfaction, (b) individual measures, and (c) general measures.

Payment of the damages and costs is simple, and the Government has 3 months to comply.  This covers just satisfaction.

The individual measures could include an investigation as to the reasons and the “political dimensions” that were the cause of the delay.

It is at that point, along with the general measures, that a Truth Commission could fit.

The idea would be to hear evidence and investigate this continuous omission not only for the benefit of the Vassiliou family but of others who were in the mass grave.

This would only require the search of government records and oral evidence by civil servants and others who have nothing to do with Turkish Cypriots or even Turkey.

This is a purely Greek Cypriot matter, and the proposal is for the Truth Commission to operate mono communally that is to say only within the Greek Cypriot Community.

Once Greek Cypriots sort things out they will have obtained the experience and high moral ground to turn to Turkish Cypriots and Turkey and apply the Truth Commission on a bi-communal level, as it should have been in the first place.

It is not I believe difficult.  It is a simple 3-step process:

(a)       the terms of reference of the Committee on Missing Persons (CMP) could be amended.  The text can be found at www.truthnowcyprus.org

(b)       the Evidence Law CAP 9 should be further amended so that any evidence taken in such an investigation cannot be used in any criminal, civil or administrative procedure before any Court.

(c)        Last but not least, internal regulations for the Truth Commission should be drawn up to ensure that truth and remorse are exchanged with the said amnesty.

The real question is whether the Cypriot government or better the Greek Cypriot community, has the courage to face the truth.  This is the truth of what people of its own community did to other members and could be the stepping stone to move forward to a bi-communal Truth Commission.  This could be an evolution of the CMP which has, I believe, served its purpose.

Perhaps this is a good point for the discussion in our society to commence.  The objective is not to punish but to find the truth, in the hope that better days will come to this island and that this information is shared while the people who possess it and those who want to receive it are still alive.