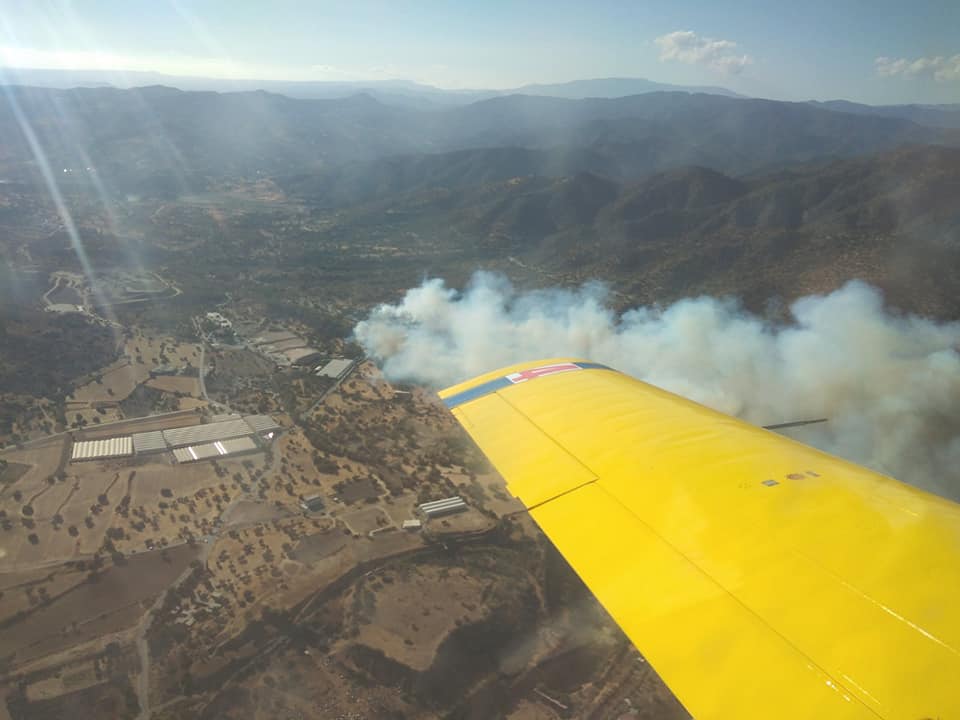 Firefighters on Friday managed to prevent a large fire in Limassol from reaching pristine forest, bringing it under partial control around four hours after it broke out.

The blaze in the Armenohori area started at around 4.15pm. It was brought under control around five hours later after burning 30 hectares of pine trees and wild shrub.

From the onset, authorities dispatched a large firefighting force to the area, including five aircraft.

However, seeing the strong winds fanning the flames out of control, authorities sent three more aircraft, amassing a force of over 25 vehicles and eight aircraft – three forestry department planes and five helicopters, including two from the British military bases. A National Guard helicopter was coordinating the sorties.

For a while, firefighters feared that the blaze would spread north towards Kyparissies, a pristine area that was completely inaccessible to ground forces.

Earth moving equipment had also been dispatched to the area to carve access routes if necessary.

Forestry department director Charalambos Alexandrou said their task was particularly difficult because of the strong winds fanning the fire, which reached force six.

“What we want to avoid is for it to enter the state forest,” he said. He said the Kyparissia area was completely inaccessible and if the flames reached it their task would become impossible.

Firefighters were trying to keep the flames contained near Phinikaria, he said.

With the aircraft departing the area as the darkness fell, ground forces moved in to mop up any sections that were still burning or posed a risk of reignition. By that time, the fire had reached the outskirts of Pareklissia in the east.

As, firefighters battled the blaze, CID officers moved in to investigate the cause. Reports said the investigators identified the origin of the fire near the road between Armenohori and Phinikaria, outside the fence of the shooting range located in the area.

Police were still trying to find clues as to how it had started.

Not very far from the area, on July 3, a huge blaze went through 55 square kilometres of forest, cultivations, homes, and other property in just a few hours, also killing four people who were trying to flee.

The fire left behind it a charred landscape, which included houses, businesses, pine forest, crops, and left 10 communities reeling. It was, the government said, the worst fire in living memory.

It travelled eight kilometres in around five hours over a perimeter of several kilometres. By comparison, a 2016 blaze in Solea destroyed 18 square kilometres in four days.

Our View: Health minister must make it clear Gesy does not have unlimited resources