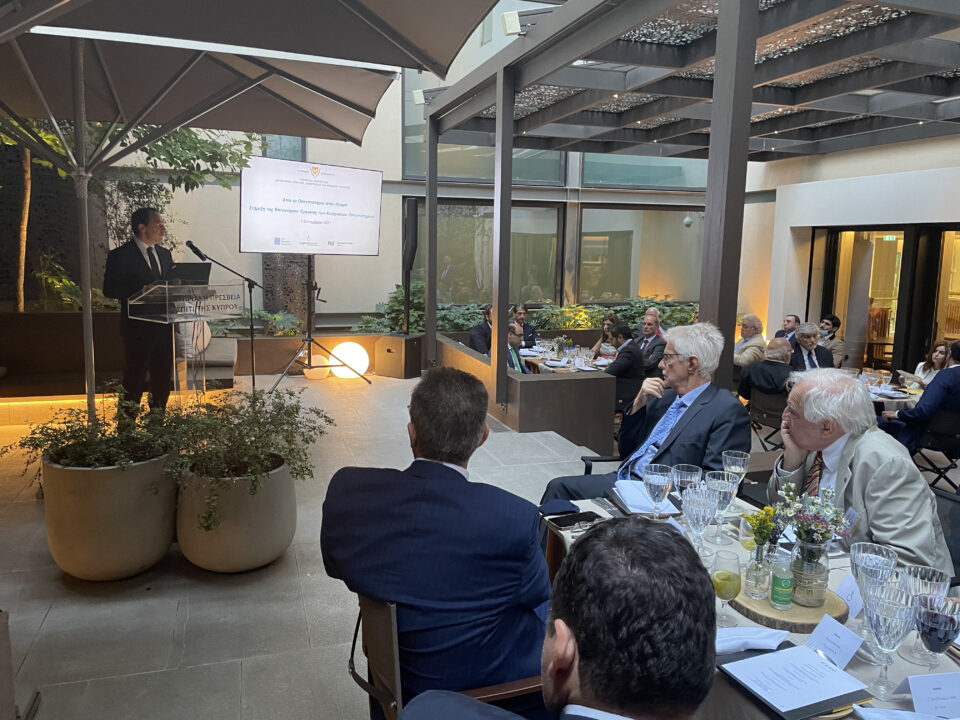 I recently had the pleasure of attending an event sponsored by Foreign Minister Nikos Christodoulides and Deputy Minister of Research, Innovation and Digital Policy Kyriacos Kokkinos in cooperation with the non-government organisations Cyprus Seeds, The Hellenic Initiative and the MIT Enterprise Forum Greece under the title ‘From Universities to the Market Place: Supporting Innovative Academic Research in Cyprus’.

Many years ago, when the idea of establishing universities in Cyprus was first tabled, my reaction was lukewarm. My basic objection was that Cyprus was a small country surrounded by sea and was thus isolated from the rest of the world. The need of young Cypriots to resort to foreign universities for their higher studies afforded them a valuable opportunity to widen their horizons, by coming into contact with cultural systems and values that were different from those of Cyprus. At the time, I was afraid that the establishment of universities in Cyprus would result in the loss of this advantage. Today, I admit that this was an incorrect assessment. Not only did this not happen but, in fact, the foundation of universities in Cyprus (and, of course, Cyprus’ accession to the European Union) substantially helped in exposing the whole of the Cypriot community to international currents of thought and have led to the enrichment of the Cypriot cultural heritage.

Of course, the high standards the Cyprus universities adhere to have helped them gain the international recognition they currently enjoy, not only as places of teaching and learning, but also as places of innovative research. It is the latter activity that distinguishes some universities and makes them stand out among the ordinary schools of higher education.

Admittedly, the development of innovative academic research within the framework of Cypriot universities is a difficult task that demands technical skills and knowledge as well as connections that extend far beyond the narrow geographical borders of Cyprus. Such a supportive framework is needed to help and support the international projection and recognition of the practical results of innovative academic research. And, most importantly, the same framework is needed to facilitate the successful commercialisation of the product of this work – an essential step for getting the fuel needed for the continuation of this research activity into the future.

This is precisely the aim of Cyprus Seeds for Technological Innovation, an idea that was conceived and supported by George A. David, with the active assistance of the Diaspora, but also with the ongoing support of organisations such as the Leventis Foundation, the Hellenic Initiative, the Research & Innovation Foundation, the Enterprise Forum Greece, the US Embassy in Cyprus and the Cyprus government, and of corporate sponsors, such as Eurobank and EY. They are all doing a great job.

Comparing Cypriot universities with their counterparts in Greece makes the former group stand out for their pioneering work in innovative research, although Greek universities and, in particular, those established in the Greek periphery have made leaps and bounds in recent years.

I asked managing director of Cyprus Seeds Maria Markidou Georgiadou whether the not-for-profit organisation offers its services of highlighting opportunities and supporting the commercialisation of innovative research to universities in the occupied areas too. “Yes, we want to help,” she said. “Cyprus Seeds aims at supporting the innovative research work produced by all the universities established in Cyprus. Every year we select, in cooperation with the MIT Deshpande Centre for Technological Innovation in the USA, a relatively small number of qualifying projects through a competitive selection process. We wish to support the innovative research work undertaken throughout our homeland. Unfortunately, this is not feasible, as yet. We hope that we will soon be in a position to do it”.

In conclusion, cheer up. Not everything is full of doom and gloom.

PS: For the lovers of the visual arts, the paintings on display at the museum where the event was held that has been set up by the Vassilis & Eliza Goulandris Foundation and opened its doors on Athens’ Eratosthenous Street (very close to the Panatheneum Stadium) two years ago represent an impressive collection of world-famous paintings that comprise one of the most important private collections created in the second half of the 20th century. The purpose of this new museum was to provide a home for these paintings, thus rendering them easily accessible to the public. It is really worth visiting.

No comment for now over accusations of verbal abuse in parliament, House President says