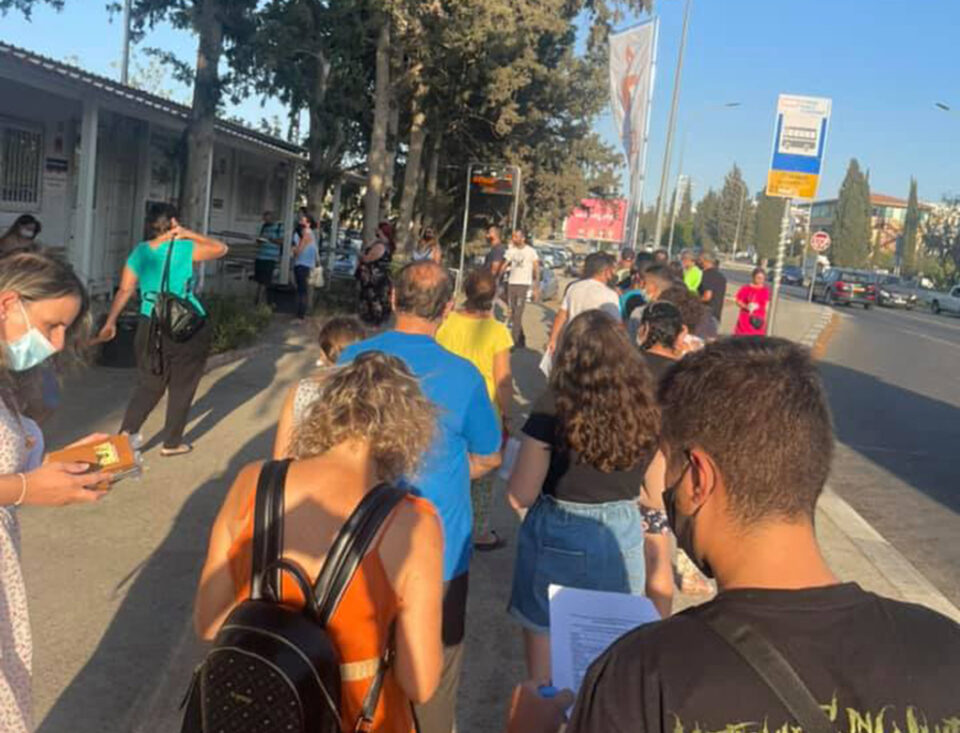 The queue at the Makarion stadium

Amid complaints from parents, Nicosia and Larnaca bus operator Cyprus Public Transport (CPT) on Tuesday assured that inconveniences with issuing and renewing student bus passes are just a one-off and a “small step towards a better future”.

The beginning of the school year has been eventful for the island’s bus operators. As Limassol’s bus operator Emel found itself involved in an alleged racist incident, CPT is facing a backlash over student bus passes, used by pupils on its school routes.

Bus passes had previously been obtained from the operator’s website, however with the start of the school year customers were asked to visit a sales outlet in person.

This resulted in long queues and hours of waiting for parents and guardians who flocked to the handful of places as the new school year rolled in.

“I wasted an hour and a half of my life waiting in the queue,” a mother who went to the Makarios stadium sales point last Saturday told the Cyprus Mail. One person was dealing with all those looking for a pass.

She explained that this was the closest to her as she lives in Kokkinotrimithia, questioning whether there are enough sales points to accommodate people who live farther away, or even people to staff them.

There are currently nine CPT sales points across the Nicosia and Larnaca districts, with some serving more central points and a smaller number set up for villages and rural areas.

Others took to social media to complain, with a mother saying on September 9 that she waited at the Makarios stadium sales point for over two and a half hours.

“It is unacceptable, in Covid times, to make people wait in a queue for hours on end under the sun,” she wrote, adding that there were not enough staff members to serve the crowd waiting outside.

A second said that she made multiple attempts to wait in the queue at the same sales point but was discouraged by the long queues, while others who live in more rural areas tried queuing three and four times without ever being served.

“Was there no way to make this so people could apply online or via an app, and then pick up their cards in person?” she asked, closing by calling CPT “disorganised and unacceptable”.

CPT’s business development manager Alexander Kamberos told the Cyprus Mail that this is simply due to the fact that the most recent system update had to be encoded on the cards – something that could only be done in person.

A post on the company’s Facebook explained that “that the new school year’s cards will need a unique identifier” that can only be issued at a sales point.

“Due to the large volume of card issuance, we have had a few technical problems with the system, but we are already working on them so that we can make everything easier for you,” it said.

CPT’s sales points operate from 6am to 9pm on weekdays.

As all students wanting to use the bus needed a card to avoid paying for single tickets, there was not surprisingly a rush for cards, a fact which CPT recognised. “It seems that everyone shows up at the same time, and queues are formed. If you go to any of the sales points earlier in the day, you will see that there are significantly less people waiting,” Kamberos said.

He did point out that once issued the card can be topped up each month online, and they are valid until the end of the pupil’s school life.

“It is a small sacrifice to make, and a step towards digitising everything, towards a better future,” he said.

Online system to speed up processing of benefits