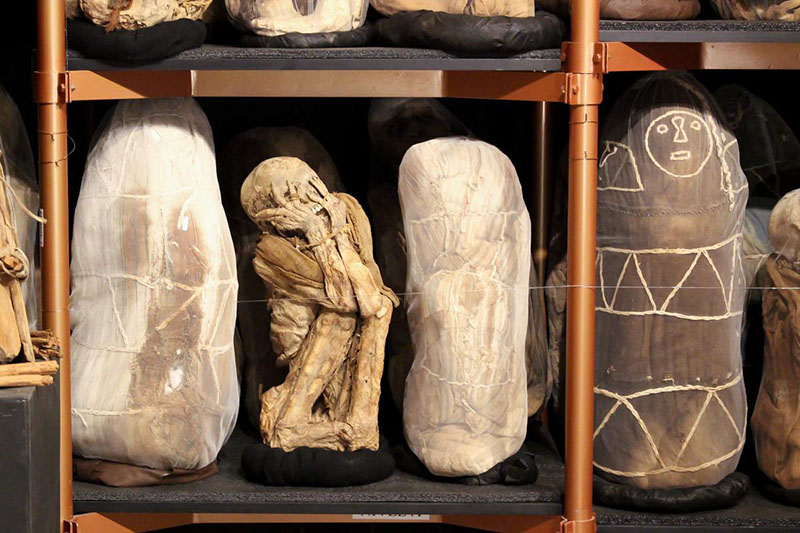 My Irish cousin Thomas is nearly a century old and dementia has laid claim to his lively, enquiring brain. Archaeology was a common love we shared, and for years post carried letters and cuttings from newspapers between our two small isles. I’d send him articles on Cyprus and he’d send me whatever he felt would interest me.

Sorting old files, I found items from 2006 and 2007 both concerning mummies; the difference between the remains is striking. Clifford Coonan’s piece in The Irish Times said, ‘A red-haired body found in a remote desert in western China provides an extraordinary link between China and the Celts of Europe.’ Cherchen Man had reddish brown hair streaked with grey and a ginger beard. DNA testing confirmed that he and hundreds of other mummies in Xinjiang’s Tarim Basin’s very dry, alkaline soils were Celts.

Found with him were the mummies of three women and a baby. Those bodies were obviously laid to rest with respect and love. Coonan’s extensive piece says that one of the women with the 3,000-year-old Man had light brown hair that looks like it was brushed and braided for her funeral only yesterday. Her face was painted with curling designs and the red gown in which she lay was still vivid. The baby was wrapped in beautiful brown cloth tied with red and blue cord. A blue stone was placed on each eye.

The weave of the cloth, Coonan continues, is the same as that found on bodies of salt miners in Austria from 1300BC. Their burial sites were marked with stone structures like the dolmens in Ireland, ringed by round-faced, Celtic figures or standing stones. Cloth, probably from Anatolia and the Caucasus, was present.

Six feet tall, Cherchen Man, buried in a red twill tunic and tartan leggings, was taken from the Taklamakan Desert in Xinjiang. People of the time were by most accounts peaceful as few weapons were among the find and there little evidence of a caste system.

The best persevered corpse according to the article was that of 2,000-year-old Caucasian Yingpan (handsome) Man who was two metres tall with a gold foil band on his forehead; he too was fair. He wore elaborate golden embroidered red and maroon wool garments with Greco-Roman motifs.

A shorter article by Barry Wigmore in the Daily Mail headlined, ‘Moment 600 years ago that terror came to mummies of the Amazon.’ His opening paragraph states, ‘Hands over her eyes and her face gripped with terror, the woman’s fear of death is all too obvious.’ He tells that the 600-year-old burials in the Amazon (northern Peru’s rainforest) survived thanks to the embalming skills of a tribe called the Chachapoyas. Eleven other mummies were also found in a massive cave complex 82ft down. These people were tall, fair-haired and light-skinned, more European than Mediterranean (now disputed).

Leading archaeologist Herman Crobera’s findings differed from the headline above. He said the remoteness of the site indicates that the Chachapoyas had enormous respect for their dead. They too did not appear to have a society structured by class differences. Jago Cooper on YouTube and Dr Sonia Guillen concur. Respect and protection were key they felt, and the embalmed positions of the mummies’ bodies, Guillen believed, were for wrapping convenience, manually carried high and low.

The Spanish conquerors encouraged the Chachapoyas to fight a common enemy, the Incas. It appears the killer in this case was often tuberculosis inherited from their ally. Still, examining the ‘faces’ of some in pictures, a journalistic question mark with regard to fear could be allowed.

I thought on death’s selectivity: of the unfortunate souls blown to bits in Afghanistan their blood turning a running sewer red, and the good passing of another cousin Noel, loved and respected within his community. He quietly, determinedly fought pancreatic cancer; his failure to win that battle wasn’t due to lack of courage. He asked that some of his ashes be spread over the east coast sea he loved. The rest carried by his wife and family to her Aran Island on the far side of Ireland, there to drift across the Atlantic. Lucky are they who can choose their manner of death and what comes after