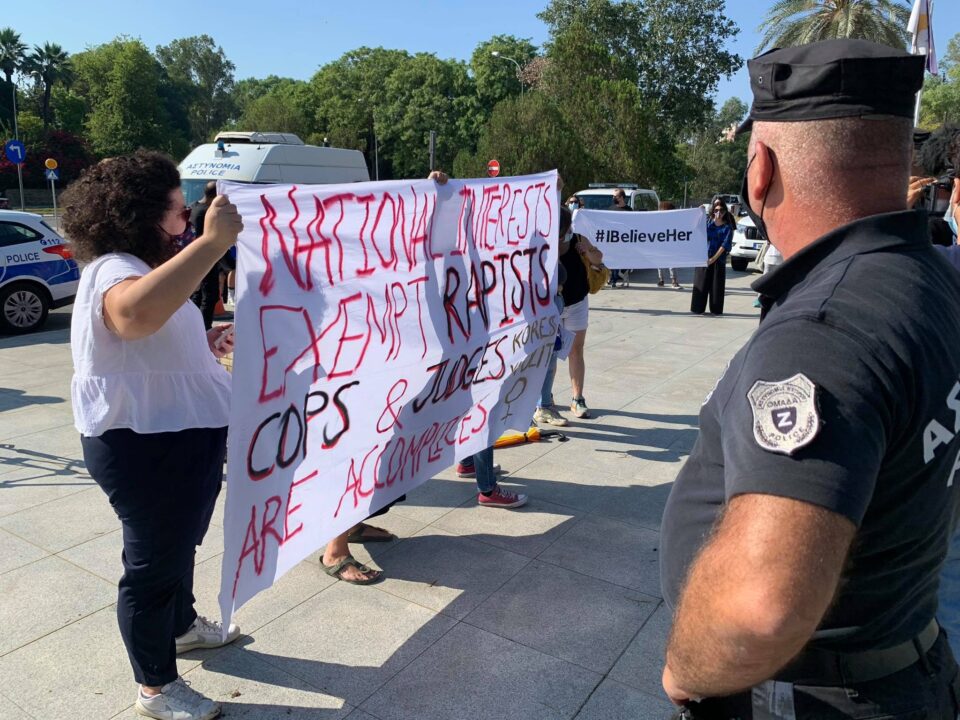 Women’s organisations held a protest outside the Supreme Court on Thursday morning in solidarity with a British woman who had convicted of lying about being gang raped by Israeli tourists in Ayia Napa in 2019.

Scores of protesters, mostly women, members of the Network Against Violence Towards Women and Kores Unleashed, gathered outside the Supreme Court where the appeal hearing was held against the young woman’s conviction. She was handed a suspended four-month jail sentence after being found guilty by Famagusta district court last year.

The protesters chanted slogans such as “Cyprus justice shame on you”, “Patriarchy rapes and kills” and the “The British woman was one of us”.

Members of the Network Against Violence Towards Women, Zelia Gregoriou told the Cyprus News Agency they were protesting for the case of the British woman but also against the way rapes are handled by the prosecution authorities, in courtrooms and by lawyers.

Gregoriou said the Network believes the young woman had an unfair trial during which procedures were not carried out properly and protocols were violated.

“It is a basic human right, to have a fair trial and this woman did not have a fair trial,” she added. It became clear from the case, she said, how lonely the victims are, when they report their rape.

“They are confronted with the whole system, because from the beginning they are seen as individuals, who may be lying,” she said. “Instead of investigating to find out what happened, it focuses on finding contradictions or gaps or other conditions that show that there was no rape.”
The teen, who was 19 when she said she had been raped by 12 Israelis aged 15 to 22, was charged with public mischief after she retracted her initial complaint.

The Women’s Equality Party Brighton are also holding a supportive demonstration at 4pm local time outside the High Commission of Cyprus in London demanding justice for their “sister” on the day of her appeal, using the slogan #BoycottCyprus and #IBelieveHer.