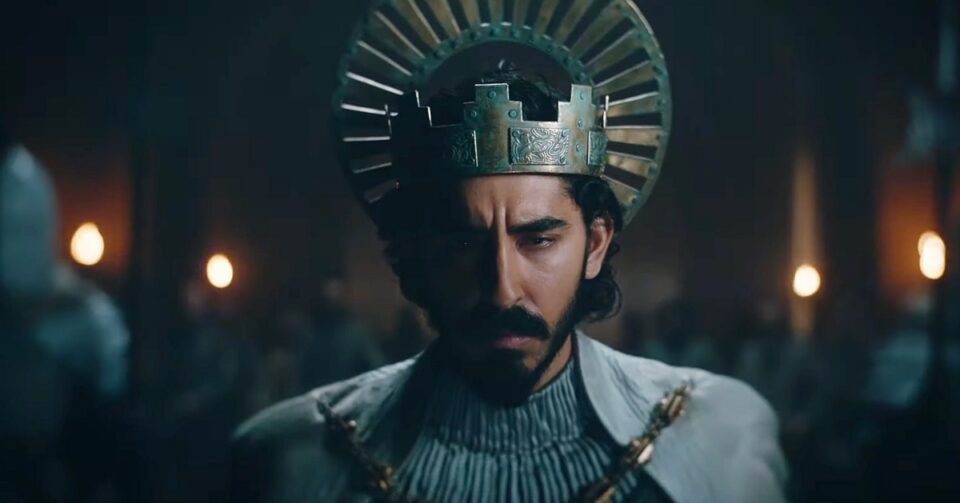 Having not read or ever studied the original poem on which it’s based, I cannot write to the faithfulness, or lack thereof, of David Lowery’s The Green Knight. But I can say with full conviction that this is a beautiful film, made all the more convincing by Dev Patel’s devoted performance as Sir Gawain. In equal measure, it is a confounding film, its plot and narrative so opaque and oblique it’ll no doubt infuriate the impatient viewer to no end.

One quick skim of the original poem’s summary on Wikipedia (if you’re inclined to compare), shows how Lowery’s version skids off the rails in a number of ways, making his interpretation of this famous tale all the more uniquely his own. Gawain is seen at first flirting around with a lowly peasant girl Essel (Alicia Vikander), until Christmas Day arrives. That’s when he – along with all the other knights of King Arthur’s Round Table – reconvene with the King (Sean Harris) and his Queen (Katie Dickie), who both look mysteriously sickly but not quite old. The King desires to hear a story or a song from one of his knights before they get to drinking and feasting, when in rides the fantastical Green Knight. His earthy and wooden appearance marks him clearly as a creature not of this Earth and yet more connected to it than anyone else in the room. What this Knight offers is a challenge, a game: whoever strikes him gets to keep his (magical?) axe, but must also seek him out in a year’s time at The Green Chapel and be ready to receive an equal strike from him.

Gawain accepts, Arthur gives him his sword (the sword, presumably) and Gawain cuts the Green Knight’s head right off. Strangely enough the Knight offered no resistance whatsoever, so the decapitation went down without much of a fuss, much to Gawain’s surprise. But then, the headless body rises, picks up its head, lifts it up to face Gawain and the head reminds him about his promise. The year passes quickly, and Gawain sets off on his quest – which ends up being more spiritual, magical and full of fright and wonder than he’d ever imagined.

Lowery’s kind of cinema is known to divide audiences and critics. In 2017 he released one of my favorite movies of the past five years (A Ghost Story), but I’ve never been able to recommend it to anyone who didn’t have the patience to watch an ambiguous story, unfold strangely and slowly. The Green Knight is not quite as compelling, but they both share an enchanting touch that puts you under a spell, if you let it. All credit to Lowery here for honing his unique talent of keeping you transfixed to the screen even though you’re not sure how much of what you’re watching has real purpose. A lord that Gawain meets along the way, played with marvelous aplomb by Joel Edgerton, at one point says, “I see things everywhere that bear no logic.” That’s basically The Green Knight in a nutshell.

Through the magic of lights, camera and action that no other artform can replicate, The Green Knight takes you on a journey full of wild imagination. On his way to the Green Chapel, Gawain encounters all sorts of quirky things: giants, talking foxes, and spirits looking for their heads among them. Andrew Droz Palermo’s cinematography (much like in A Ghost Story) takes centre stage and is a massive reason why the film is such an aesthetic wonder. Landscapes coated in a wintry fog, light dancing in ways both ominous and romantic, the gorgeous foliage of the forest where much of the story takes place covering the screen like a soft, warm blanket. If you like your movies looking good, you’ll be hard-pressed to find a better looking one this year.

Coupled with the stunning look and impressive production design, the performances in The Green Knight have an almost equal power to amaze. Dev Patel’s never been better in his career (at least not from what I’ve seen), and the rest of the ensemble is seriously strong. From Edgerton, to Vikander (who has the honour of playing two drastically different characters, and nails them both), Harris to Barry Keoghan who plays a scavenger to perfection – everyone has full faith in their parts, no matter how big or small, and clearly trust Lowery’s vision wholeheartedly.

No doubt there are moments that are a tad too slow, periods when the narrative lulls to such an extent where you may find yourself thinking, ‘what’s the point to all of this again?’, but stick with it and you’ll be treated to a pretty extraordinary experience – right up until a breathtaking, wordless montage that I won’t be soon forgetting. With enough splash of modernity that adds zest to a legendary tale from long ago, David Lowery has created something special here, even if it’s not the most comfortable watch at times.