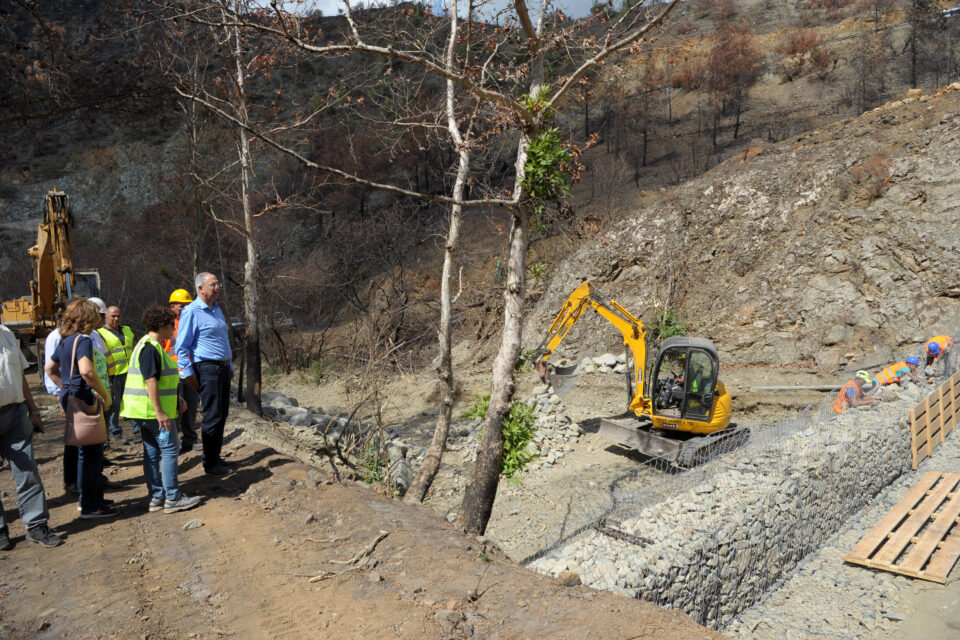 The minister of agriculture welcomed progress made in the village of Arakapas on Friday to protect the hillsides in the event of rain after a large fire hit the area earlier this summer.

The catastrophic fire hit areas of Limassol and Larnaca districts in July and minister Costas Kadis visited to inspect the flood defences created since.

“I was very pleased to see that the projects are progressing properly in a short period of time,” he said.

Kadis congratulated the water development department and all those involved in this effort.

The minister explained that the first phase includes the creation of environmentally friendly dams at ten sites in the Limassol District and 16 in the Larnaca District, clarifying that one site may include more than one project, as in the case of Arakapas.

“With the implementation of these projects we will avoid the worst,” he added.

Regarding the possibility of reforestation, he said that the state cannot intervene because most of the damaged areas are private property, while he said he is optimistic that nature would begin to recover with the first rains.

He said that in October he will tour the affected areas of Limassol and Larnaca, accompanied by the university professor of geology Efthymios Lekkas who has visited the island from Greece to advise on the correct measures to take with the aim of reviewing the situation.

At the same time, Arakapas mayor Vassos Vassilios, said he was pleased with the progress of the projects and said that the compensation process to affected farmers has already begun.