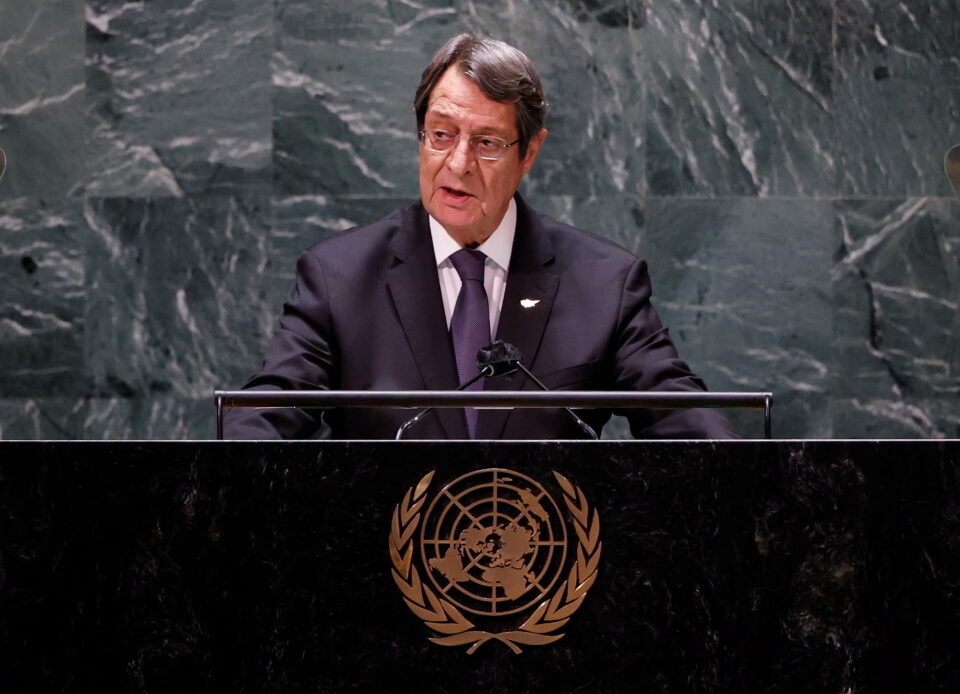 The ‘creative’ meeting President Anastasiades had with UN Secretary-General Antonio Guterres on Monday and his rather strong-worded address to the UN General Assembly on Friday afternoon will now be followed by lunch with Turkish Cypriot leader Ersin Tatar. This will take place on Monday with Guterres too, but the president said he was not as optimistic as he would like with regard to the sides finding common ground for resuming talks. That he is optimistic at all defies belief, but it is all part of the narrative that he is doing his best to find common ground.

After the Guterres meeting he said: “We have listed the views, positions over how a creative dialogue without prerequisites can be restarted. I have developed some positions and ideas and we have agreed that everything related to the Cyprus issue will also be discussed during the lunch.” How a creative dialogue could restart when Tatar insists on his prerequisite for sovereign equality only Anastasiades could explain. Has he had any indication from the Turkish Cypriot side that it would put aside this condition?

Before the meeting the president had said he would tell Guterres about all the different proposals he had made ranging from decentralisation of powers to the return of the 1960 constitution. Does he seriously think that coming up with a host of different proposals about a settlement shows commitment to one? On the contrary, it shows there is no clear vision. How can you achieve an objective when you cannot decide what this is?

Anastasiades did not help his cause, whatever it is, with his speech at the General Assembly in which he spoke about Turkey presenting herself as the victim and winning the communications kudos. Who is to blame for this, if not Anastasiades and his constantly changing positions on the Cyprus issue?

If he was committed to a settlement, rather than just a resumption of the talks, he would have declared his acceptance of political equality, which is non-negotiable for the Turkish Cypriots, without caveats and committed to a deadline for reaching a settlement. This approach might still not have had the desired results, with the Turkish side digging in its heels on sovereignty, but nobody could question his intentions, as has been the case for the last few years.

It is entirely possible that the last opportunity for a negotiated settlement was lost at Crans-Montana and what we have been witnessing in the last few years is political theatre. With Tatar setting unacceptable conditions for a resumption of the talks and Anastasiades failing to convince about his commitment to a federal settlement with political equality there is no hope of anything happening no matter how many times the two meet Guterres and his envoys. Anastasiades is aware of this which was why he used his address at the General Assembly to engage in the futile blame game.