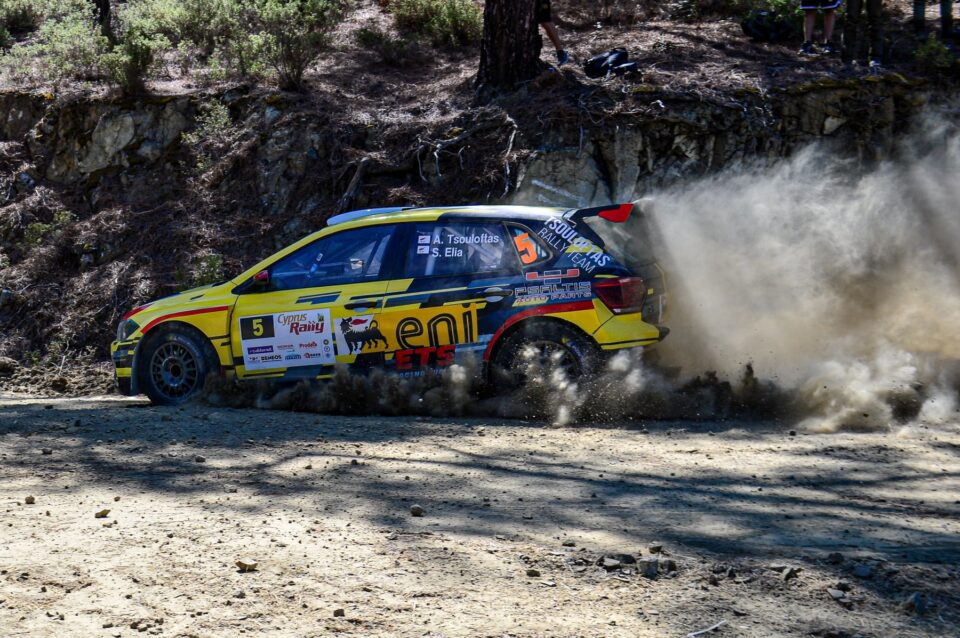 Alexandros Tsouloftas and co-driver Stelios Elia in their Volkswagen Polo

Cyprus RallyAlexandros Tsouloftas and co-driver Stelios Elia, in a Volkswagen Polo, stormed to their first ever win on the Cyprus Rally with a masterful drive that saw them in contention from the start, and clear leaders after their main rivals retired.

There were upsets aplenty on this year’s event, with two of the favourites out of the race by the start of Sunday’s second Leg.

The first casualty was Qatari ace – and seven times winner of this event – Nasser Al Attiyah, who went off the road in stage 6: his car burst into flames and the stage was cancelled to allow the fire brigade access and ensure the safety of the remaining competitors.

Cypriot Simos Galatariotis – who had clocked fastest time on all but one of Saturday’s time tests – arrived at the overnight halt 26.9 seconds ahead of his nearest challenger, Alexandros Tsouloftas. The top two had a comfortable cushion of almost five minutes between them and third placed Abdullah Al Rawahi from Oman.

The leader board changed again, however, later on Saturday night: each car has a tracking device, and the Clerk of the Course informed the Stewards that car number 4 – Galatariotis – had twice deviated from the rally route on a road section; with a 30 second penalty imposed for each infringement that meant the race leader was relegated to second place, 33 seconds behind new leader Tsouloftas. Stung that the deviation was, as his team put it, “a few metres” and not on a competitive section, he decided it wasn’t worth continuing and withdrew from the race.

With second placed Al Rawahi looking unlikely to be able to claw back 5 minutes in just 86 kilometres of special stages, Tsouloftas was in a position to cruise carefully to the finish to ensure victory.

Petros Panteli was in striking distance of snatching second overall from the Omani, and Panayiotis Yiangou was also in contention, just 10 seconds behind Panteli.

Fastest times on Sunday’s first three stages saw Tsouloftas increase his lead to almost seven minutes by the midday regroup, while Al Rawahi could feel the pressure from Pantelis and upped his game, although the gap between them was still just 26.6 seconds at the half-way service stop.

Tsouloftas continued to extend his lead in the afternoon, while Pantelis kept pushing and headed to the final stage having closed the gap to Al Rawahi to just 10 seconds. He and the Omani had clocked almost identical times on the morning run over Agia Marina – could he find what was needed to make up the 10 seconds over the final 11 km test? It was a tall ask, but somehow he managed to shave a full 12 seconds off his earlier time, and when Al Rawahi (presumably after a problem) only managed a time some 40 seconds slower than his morning pass, Pantelis moved up to second overall, 8 minutes adrift of Tsouloftas, who won every stage of the day to take a well-deserved win.