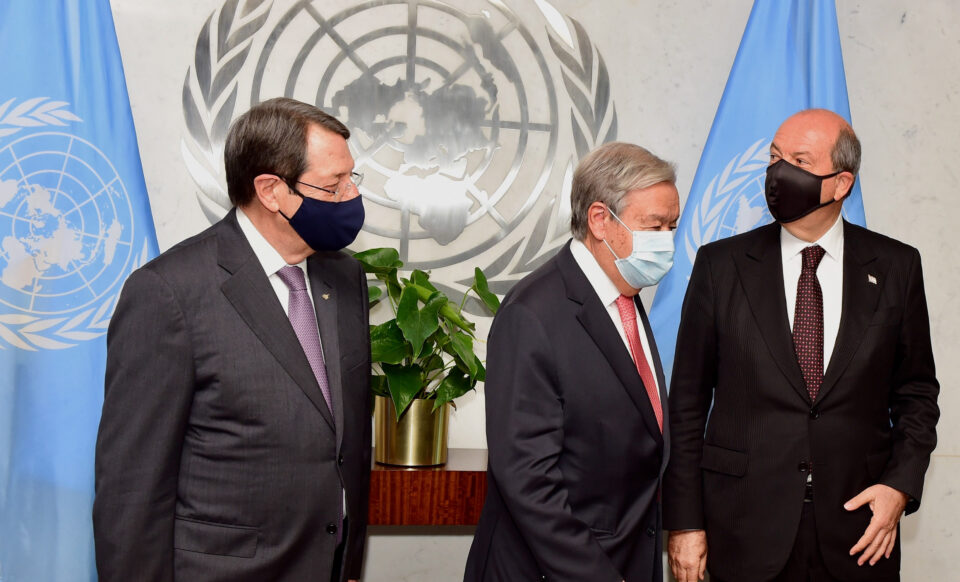 Though there is no common ground for official negotiations on the Cyprus problem, both sides agreed to strengthen cooperation and bicommunal technical committees for the improvement of life on the island, Turkish Cypriot leader Ersin Tatar said on Tuesday.

According to reports in the north, Tatar, assessing the informal trilateral meeting in New York between him, President Nicos Anastasiades and UN Secretary-General Antonio Guterres on the way forward on the Cyprus problem, said that there was no common ground for starting official negotiations at the moment.

“Even though such talks do not yield results, they are good for dialogue,” he said, however.

He added that during the lunch hosted by Guterres, he reiterated his position, based on sovereign equality, which envisages two states coexisting side by side. Tatar added that he also said the proposal he tabled at the informal meeting in Geneva last April was still on the table.

“If our proposals are accepted, official negotiations can begin,” he added. Tatar’s proposal called for the recognition of the north’s sovereignty by the UN, and, after this was done, it would start negotiations as equals with the Republic of Cyprus about their future relationship.

He said Anastasiades did not accept this, pointing out that the Turkish Cypriot side was faced with “a mentality that does not accept our right to separate sovereignty.”

Tatar also said that both the Greek Cypriot side and the Turkish Cypriot side expressed their readiness to make steps to improve life in Cyprus and to strengthen the 12 technical committees which was welcomed by Guterres.

Guterres is expected to announce the appointment of a new special envoy for Cyprus to replace Jane Holl Lute to discuss confidence-building measures (CBMs) but also the possibility of finding common ground to resume the dialogue between the two sides.

Anastasiades said on Monday it was a creative meeting, and the differences of the positions of the two sides were recorded.

At home, bar ruling Disy that assessed the meeting as “positive”, most parties said it merely confirmed expectations that nothing much would come out of it.

“It is quite positive for me that the appointment of an envoy of the secretary-general is expected to continue Ms Lute’s work,” Neophytou said. “We need dialogue because it is only through dialogue that we can break the deadlock,” he added.

Neophytou also said it was important to pay attention to CBMs that improve the climate.

Main opposition Akel, on the other hand, citing past experience, said discussing CBMs instead of resuming substantive talks is far from certain that it will yield results especially in the absence of a substantive negotiation process. CBMs alone cannot avert the faits accomplis promoted by the occupying power “or the disastrous path to the final partition.”

Akel spokesman Giorgos Koukoumas said the result of the trilateral confirms the low expectations, mainly due to the Turkish demand for a two-state solution and recognition of the north’s sovereign equality. “The response of the Greek Cypriot side should be the unwavering and loyal adherence to the agreed framework and convergences, in order to continue the talks from the point where they left off in 2017,” Koukoumas said.

The Turkish side refuses to start the talks from where they left off in 2017, arguing negotiations for a federal solution are a thing of the past, citing “new realities” on the island.

Diko, commenting on the appointment of a new special envoy to help the sides find common ground, wanted to know “exactly what is this common ground the UN seek? It is a confederation?”

Unfortunately, Diko said, “the insistence of the occupation leader Ersin Tatar on the solution of ‘two states’ and separate sovereignties do not leave much room for optimism in this process.”

For Edek, “endless discussions on CBMs diverts the Cyprus issue from its proper basis, as a problem of invasion, continued occupation and ethnic cleansing, and contributes to the capitalisation of additional benefits for the occupation regime.”

Archbishop Chrysostomos too weighed in on the meeting. He said not much hope is left since Tatar acts on the instructions of Ankara, whose goal is to have a Turkish Cypriot state in Cyprus.

He said the Turkish side seeks recognition of the north, which will not happen.

“We, the Church reject something like that,” the archbishop said.