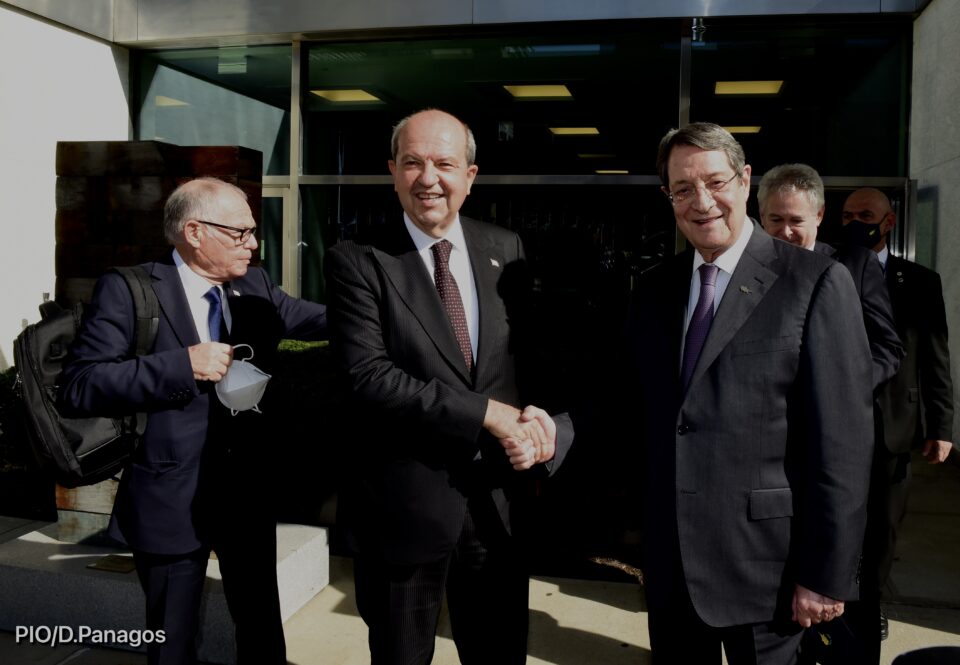 Handshake and smiles: President Anastasiades and Ersin Tatar on Monday

Anastasiades refrained from giving a detailed account of what was discussed at the around two-hour informal meeting hosted by Guterres for him and Tatar.

“It was a creative meeting, of course the differences were recorded,” said Anastasiades, who was also marking his 75th birthday.

“Mr Tatar developed the positions on sovereign equality and two independent states, and I developed our position which is fully in line with the UN resolutions, the mandate of the Secretary-General based on the resolutions, and we have developed various ways of moving forward to overcome the deadlock, but also to create prospects for resuming a creative dialogue,” he added.

He said he could not provide more details, but that he did not fail “to point out everything that needed to be pointed out, in order to create the correct perceptions of what is heard from the other side, but at the same time to be creative from now on.”

According to Anastasiades, Guterres seems to be oriented towards the appointment of a special envoy to replace Jane Holl Lute, to discuss confidence-building measures, but also the possibility of finding common ground to resume the dialogue between the two sides.

An announcement on this would be issued on Tuesday by the office of the secretary-general after consultation with both sides, Anastasiades said.

He said Guterres did not refer to a specific person as special envoy.

Asked if he would have another meeting with the secretary-general and Tatar, Anastasiades said they had not agreed on anything like that for now.

On whether Guterres and Tatar welcomed his own proposal to return to the 1960 Constitution, Anastasiades said the secretary-general was not there to comment positively or negatively.

“What he retains is anything that can be a motivation to bring the two communities together.”  But he added that Tatar was sticking to his own positions “and therefore they are falling on deaf ears.”

Tatar said after the meeting that they talked about various issues, and expressed hope to see progress, “but of course this was just lunch,” he told Anadolu Agency.

He added that Guterres would make a statement about the meeting in a few days. Tatar said they tried to talk about everything.

“We believe that the secretary-general can find new ways,” he added.

The Turkish Cypriot leader reiterated that recognition of the north and sovereign equality were their rights.

“What we need to do now is to use every opportunity to protect the rights of the Turkish Cypriot people and to discuss ways forward,” he said.

On his way to the meeting, commenting on Anastasiades’ statement that he was not open to a two-state solution, Tatar said there were already two separate states in Cyprus.

“There have been two separate states in Cyprus for 60 years, the Turkish Republic of Northern Cyprus in the north of Cyprus and the Republic of Cyprus in the south, which turned into a Greek state. After this point, no one can give up their 60-year-old state. We will not give up our state,” he said.

The new envoy would replace Lute, whose duties were terminated after she accepted a senior position at an international energy and petrochemical company and following concerns about potential conflicts of interest with Cyprus and Turkey.

Tatar has been reiterating in recent days he would not agree to the appointment by the Security Council of the separate position of a new special representative, who would be forced to move within the framework of its resolutions as regards the Cyprus problem. This would mean the new representative would not be able to discuss the two-state solution the Turkish side is after. But Tatar said he would not object to a new special envoy, like Lute, because they would not be so constrained.

Guterres had last week separate meetings with Anastasiades and Tatar in New York, during which the two sides expressed their positions on the way ahead after no common ground was found at the informal meeting on Cyprus that took place last April, in Geneva.

Venezuelan academy of medicine expresses concern over use of Cuban vaccine