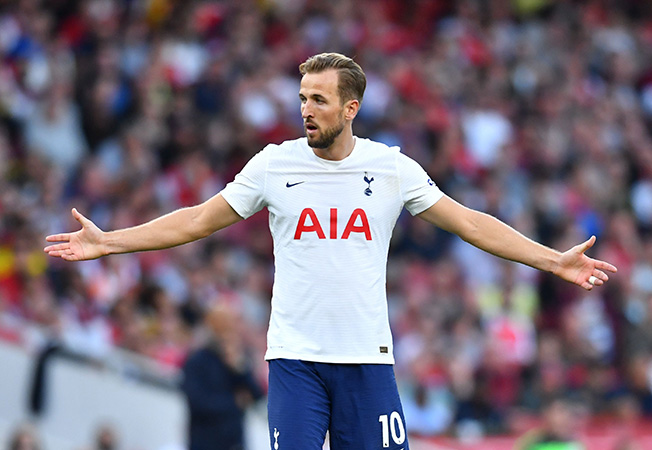 The manner of performances in 3-0 losses to Crystal Palace and Chelsea were concerning, but the way they sank to a dismal 3-1 defeat at Arsenal on Sunday has had the alarm bells ringing

Tottenham boss Nuno Espirito Santo is unfazed by recent criticism and only concentrating on recovering from his side’s current slump.

Things have changed quickly for the Portuguese as after winning his first three Premier League games in charge and being named August’s manager of the month, three successive defeats have now seen him coming under early pressure.

The manner of performances in 3-0 losses to Crystal Palace and Chelsea were concerning, but the way they sank to a dismal 3-1 defeat at Arsenal on Sunday has had the alarm bells ringing.

“I’m not worried about the judgements,” Nuno said ahead of Thursday night’s Europa Conference League tie with FC Mura of Slovenia.

“What I’m worried about is how we can play better. How can we play better? The judgement, and the criticism, and the opinion and all of that is all part of it.

“When you don’t play good, and you don’t perform, and the results don’t go along, criticism is something that you have to deal with. So we understand it, it’s up to us to react and to change it.”

Tottenham initially overlooked Nuno in their search for Jose Mourinho’s successor due to his style of play, which is at odds with chairman Daniel Levy’s pursuit of the ‘Tottenham DNA’ – something he defined as “free-flowing, attacking and entertaining” football.

Nuno’s side have definitely not delivered on that front so far as they have had less shots than any other Premier League side, created less chances from open play and covered less distance.

The former Wolves boss insists he is aware of what is expected.

“I have been told. And everybody knows. It’s football,” he said.

“Sometimes it’s not possible but we’re aware that this is what we want to do. But it takes a building process to achieve it. And we’re trying.”

The first-half performance against the Gunners was arguably the worst in recent north London derby history as the hosts strolled into a 3-0 lead.

Nuno accepted he got his tactics incorrect and also selected the wrong players, but is confident his squad have belief in his philosophy as a coach.

“Yeah, totally believe. There’s no doubts about that because we work together every day, we prepare together and these moments we need to stick together,” he said.

“And the belief is the first step to do things and we have it. You have to realise sometimes it’s not possible.

“Sometimes opponents is better than you and you have to be humble to give credit and sometimes you don’t perform. Sometimes the plan is no good. The belief in all of us is here.

“If you go through history, unfortunately every team goes through a moment like this.

Nuno has doubled down on his indifference to new heading guidelines, saying it is “absurd” to tell players not to head a ball if it is in the air.

Professional clubs have been issued guidance from governing bodies that limits the number of “higher force” headers in training sessions.

The Portuguese previously admitted to not monitoring it.

He said: “I know that maybe I was not very fortunate to say that. I just honestly try to tell the reality. It’s very difficult in terms of training sessions to prevent and avoid heading the ball.

“If you’re playing a small side game, and the ball goes in the air, tell me if it makes sense to say, ‘Don’t head it’. It’s absurd.

“We’re trying to prevent this action over and over again because we are aware it can cause dementia and we don’t want to provoke any harm to our players, but at the same time it is very hard to avoid it.”

Easing of divorce law under discussion

Breaking with the left, Labour’s Starmer promises to win back UK voters