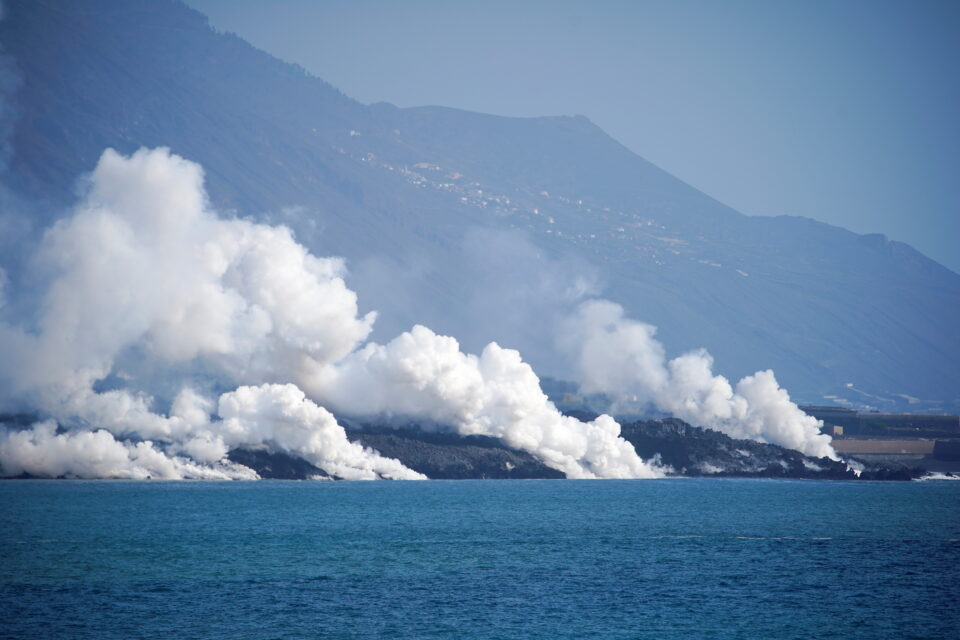 Smoke rises as lava flows into the sea off La Palma

‘Don’t bother your pretty head about it’ is the prevailing media take on the risk of the volcanic eruption on La Palma in the Canary Islands turning into a mega-tsunami disaster. The media definitely over-hyped that risk when it was first suggested 20 years ago, so now they have to work the other side of the street.

But the original story still has legs. The eruption is now more than two weeks old, but the explosions and lava flows are still increasing.  Part of the main cone of Cumbre Vieja (‘old summit’) collapsed last weekend.

La Palma and its neighbour El Hierro, the westernmost islands of the Canaries, are so volcanic that similar cone collapses have removed about half of their above-water mass during the past million years. The biggest single landslide, about half a million years ago, dumped an estimated 200 cubic kilometres of rock into the Atlantic. That’s an entire mountain’s worth.

The volcanoes constantly rebuild the islands, too, so massive landslides are a normal part of their geology. There have been at least ten in the past million years. That’s why volcanologist Joan Martí, when asked if the flank of Cumbre Vieja might slide into the sea and cause a huge tsunami, replied that “it is possible, but it is not likely.”

The chances are strongly against it happening this time, because Cumbre Vieja has been erupting on average once a century since records began, and there has not been a big slide there for at least 125,000 years.

But there will eventually be another collapse on La Palma and then a tsunami, maybe tomorrow, maybe in 100,000 years or so. That’s how these islands work. What we don’t know is the size and reach of the resulting tsunami.

The original scientific article warning of a possible mega-tsunami from La Palma was written by Steven Ward and Simon Day in 2001. They estimated that the giant waves generated by a flank collapse would hit the Moroccan and Spanish coasts in two to three hours, and make it all the way across the Atlantic to strike the Brazilian, US and Canadian coasts in nine hours.

Hundreds of metres high at first, the tsunamis waves would probably be down to one hundred metres by the time they reached Spain, and perhaps only 25 metres high when they struck the North American coast from Florida to Newfoundland. But that’s still a lot.

The highest point in South Florida is only about 25 metres above (normal) sea level. There is enough low-lying land, including city centres, along the 3,500-km east coast of North America to guarantee that a great many people would die.

Or so Ward and Day estimated – whereupon other scientists immediately piled in to insist that they had got the geology wrong, or the volcanology, or the rate at which tsunami waves lose height over long distances. This is how science works: one set of researchers puts out a new idea, and others try to knock it down.

They did knock this one down in the public mind and the media, and certainly some of Ward and Day’s calculations were open to dispute. What the media have missed is that all the basic facts were correct: the relatively frequent massive slides (one every 100,000 years in the Canaries, on average), the tsunamis that follow, and the immense damage they do.

The odds that this particular volcanic eruption will cause a mega-tsunami are less than one in a hundred, maybe one in a thousand. Even if a tsunami from La Palma did reach the Americas, the wave height might be less than one metre. But the risk of unpredictable, life-altering events is real.

We can do nothing about flank collapses on volcanic islands except have a good early warning system, but they are only common in the Hawaiian Islands, the Canary Islands, and the Indonesian archipelago. Then there’s asteroid strikes, global plagues and nuclear winters, of course, but let’s stick with volcanoes.

Just east of the Rocky Mountains in the west-central United States, Yellowstone has staged three long-lasting ‘super-eruptions’ at 2.1 million, 1.3 million and 631,000 years ago.

Each time it covered the surrounding states with volcanic ash a metre thick, coated the entire continent with enough ash to kill most green plants, and boosted over a thousand cubic km. of pulverised rock and gas into the atmosphere.

That blocked much of the incoming sunlight for the next six to ten years and caused a ‘volcanic winter’, with 3 or 4°C lower average global temperature. If that happened today, it would cause global crop failures and mass starvation.

There have been at least 47 such ‘super-eruptions’ in the world’s history.

Gwynne Dyer’s new book is ‘The Shortest History of War’.