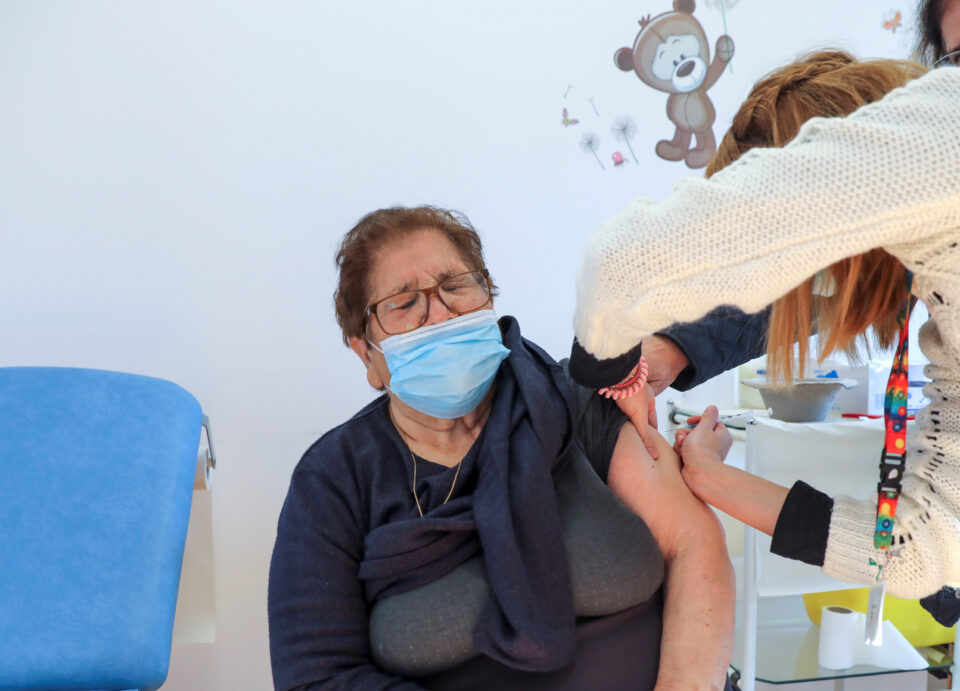 An elderly woman receives a vaccine

Health Minister Michalis Hadjipantelas said on Thursday he would propose cabinet lower the age for Covid booster jabs to those aged 60 and over.

Currently, booster jabs are being offered to those aged 65 and over  — provided six months have passed since they completed their vaccination — as well as to vulnerable groups and health professionals.

The government had asked its team of experts to submit recommendations as to who should have priority for the third jab.

According to reports earlier on Thursday, the majority view on the state’s epidemiological team was that these be administered to 60 years plus.

“The proposal that will go to cabinet tomorrow concerns people aged 60 and over and there are additional vulnerable groups of the population who will be able to receive the third dose, such as diabetics,” the minister told reporters on the sidelines of a visit to the Cyprus Institute of Neurology and Genetics (CING).

Earlier on Thursday, epidemiologist and government advisor Maria Koliou told CyBC that her recommendation was that booster jabs be administered to people of 60 years of age and above.

This appeared to be the majority view among experts but differed from that expressed by another government advisor, Petros Karayiannis, professor of microbiology and molecular virology at the Medical School of the University of Nicosia, who on Tuesday said he was in favour of giving the third dose of the vaccine to people of 50 years of age and above.

“We simply have no evidence, even just as far as Cyprus is concerned, that people under 60 are at high risk of getting seriously sick and ending up hospitalised without the booster shot, unless they are immunosuppressed” Koliou said.

Of several transmission chains detected by the contact tracing team, Koliou said the situation is not worrying, as most clusters have already been identified in environments, “which are easy to control.”

“However, the slight rise in the positivity rate within the community, which went from 0.2 to 0.3 per cent should be a wake-up call for everyone, especially considering that the cold season is fast approaching, meaning we will all be more vulnerable,” she said.

“Strict implementation of the SafePass is more important than ever, as is vaccination coverage. People for whom receiving the jab is contraindicated are only under one per cent of the population, so almost everyone should receive the vaccine,” Koliou said.

Meanwhile, the health ministry urged all health professionals in nursing homes to get vaccinated, adding that the transmission of the virus is faster in places where vulnerable people reside.

According to figures up to October 12, the booster shot has been administered to 26,097 people. The vaccination rate among adults is at 81.5 per cent for the first shot and 79 per cent for full vaccination, the health ministry added.