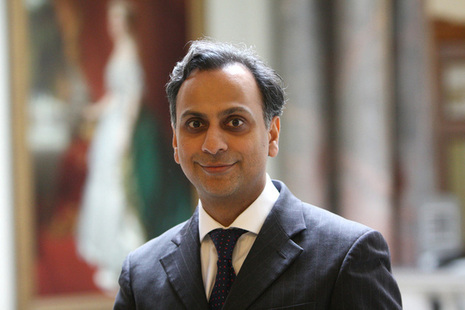 The appointment of a UN Secretary-General’s envoy for Cyprus was not on the agenda of the meetings with British foreign office senior official Ajay Sharma on Monday and Tuesday in Cyprus, a British High Commission spokesperson said.

The spokesperson told CNA that “as the FCDO’s senior official on a Cyprus settlement, Ajay Sharma visited the island again as part of his regular pattern of visits to the region, to meet a range of interlocutors.”

“The issue of the UNSG`s envoy appointment was not on Sharma’s agenda,” the spokesperson added.

Diplomatic sources told CNA that during his meetings in Cyprus, Sharma gave further explanations and details about the British ideas as regards the resumption of the negotiating process on the Cyprus problem, “which lie within the agreed UN framework for a bizonal, bicommunal federation, and provide for the decentralisation of powers to the constituent states (decentralised federation)”.
The same sources said there was nothing new on the issue “just some assurances that the secretary-general will at a certain stage appoint an envoy”. The source said that the effort is focused on putting the process for a Cyprus settlement back on track.

UN Secretary-General Antonio Guterres’ personal envoy Jane Holl Lute withdrew from the Cyprus portfolio recently after engaging for the most part in shuttle negotiations for the past three years or so to see if there were grounds for new talks. Normally when talks are ready to begin, the UN chief appoints a special envoy for that process.

The Greek Cypriot side said it is waiting for a new envoy to be appointed as agreed during a meeting in New York last month between Guterres and the two leaders. The government is blaming the stance of the Turkish Cypriot side, which is seeking negotiations on a two-state solution, for the fact that a new envoy has not yet been appointed.

Turkish Cypriot leader Ersin Tatar said on Sunday that as things stand, there are no grounds for new negotiations and hence no need for an envoy. The Greek Cypriot side wants talks to pick up where they left off in Crans-Montana in 2017.