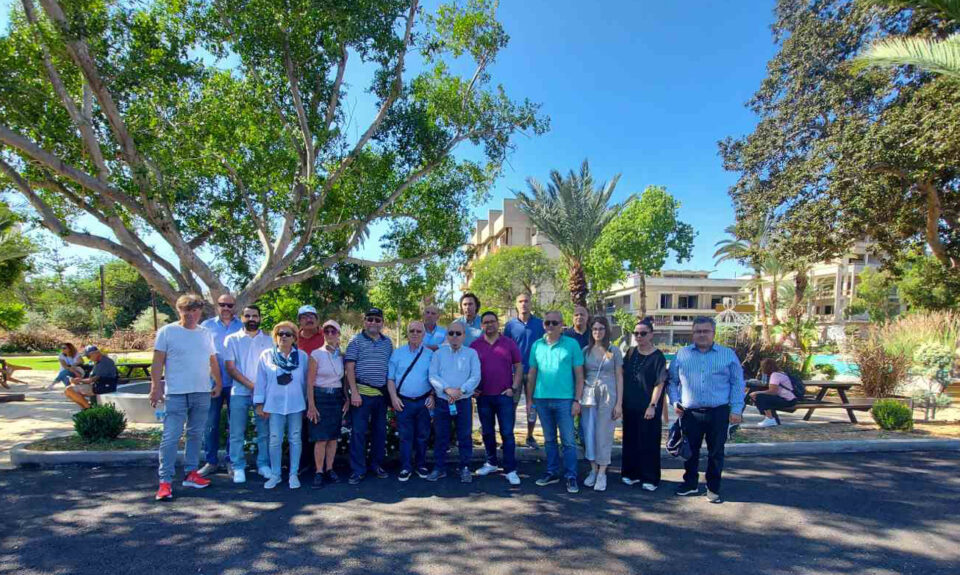 Famagusta mayor Simos Ioannou visited on Saturday the fenced area of Varosha along with members of the municipal council to see first-hand the scale of the interventions carried out by the Turkish Cypriot side to the areas opened for visitors.

In total 20 of the 26 members of the Famagusta municipal council crossed to the north and headed to the fenced area of Varosha to see for themselves what the opened up streets now look like.

They walked along Dimokratias Avenue and to the recently opened beach. A group also went to the town hall.

“We have come to our town,” Ioannou said.

He said they decided to visit Varosha to see for themselves, “as the legitimate authority of the city, how they have progressed, what they have done and what they have opened in occupied Famagusta”.

“The second reason is to prove to the whole world that this city belongs to us, the Famagustans,” Ioannou added. “The third, is to send the message that we come in peace, and we are ready to live together, we are ready to resolve the Cyprus issue, we are ready to show that nothing separates us from the Turkish Cypriots, and we can live with them,” he said.

Ioannou said some of the younger municipal councillors were surprised to see for the first time Varosha, while those who had lived there felt emotional, himself including. He said he was able to see his school, from which he graduated in 1973.

The mayor referred to the UN Security Council resolutions on Famagusta and said these were ways for the refugees’ return to their town under UN administration, “to show together with the Turkish Cypriots that this city can become a model, and benefit from all these advantages of our city.”

On whether there was still hope for a solution to the Cyprus problem, Ioannou said he believes there is.

“Perhaps two thirds of the Famagustans are gone, perhaps we will be gone too, but there is always hope, but time is against us,” the mayor said. He added that just because there was hope it did not mean that there was room for delays.

Commenting on the Turkish moves in Varosha, he noted that it was not everyone in the north behaving that way but only those who did not wish a federal solution. He stressed the importance of seeking a solution as provided for in the UN resolutions and EU decisions.

The Famagusta municipality, he said, continues to brief the international community on the situation in Varosha.

Parts of the fenced area of Varosha were opened by the Turkish side for the first time since 1974 a year ago for visitors. In addition, a small part, around 3.5 per cent of the area was demilitarised, with the north calling on property owners to return under Turkish Cypriot administration and lay their claims through the immovable property commission (IPC). The IPC was set up by Turkey in the north as a means of domestic remedy for claims by Greek Cypriot refugees for their property in the occupied areas.