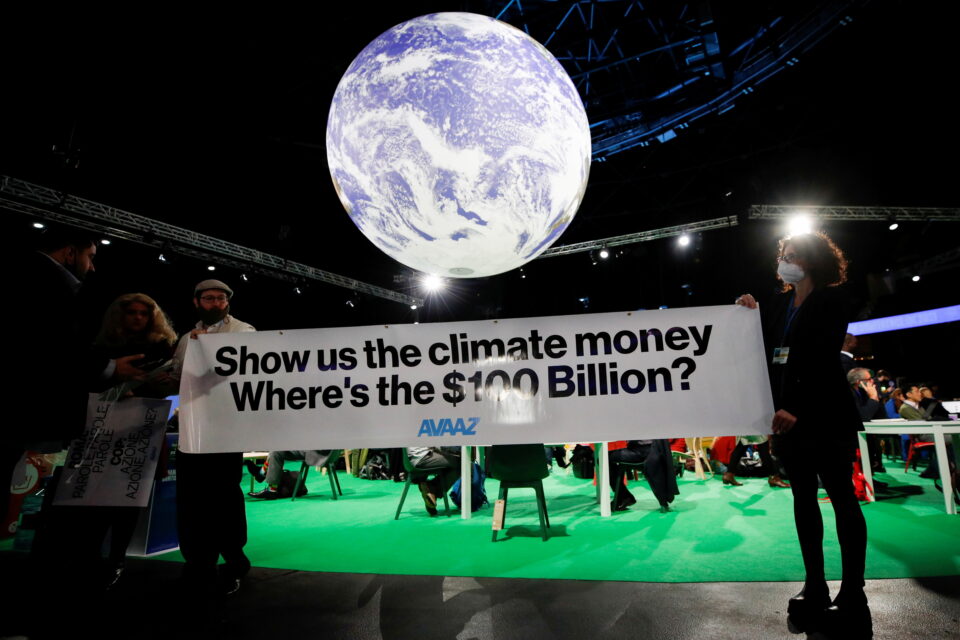 A protest during the UN Climate Change Conference (COP26) in Glasgow

About 65 million years ago, before God created mankind, planet Earth was dominated by dinosaurs. Children love them as toys, but it is interesting in these climate change times to notice that dinosaurs perished after an extinction event that changed the temperature of the atmosphere.

An asteroid about six miles wide struck planet Earth and the fallout from its impact blackened the sky causing a nuclear winter that destroyed dinosaurs as a species.
There is no asteroid on its way to planet earth at present. If there were, rocket and nuclear scientists from America, Russia, China, Britain and Europe would agree immediately to build rockets with the firepower to take it out in space as far away from planet Earth as possible.

What humanity is facing, however, is evidence that burning of fossil fuels is now so widespread that the carbon dioxide released into the atmosphere is trapping the heat the sun beams on earth causing a greenhouse effect that the scientists believe is changing the equilibrium in the atmosphere’s temperature necessary for the survival of our species.

The problem all countries face is that on one hand the burning of fossil fuel is required for the energy necessary for modern living and on the other it causes climate change that poses a threat with dire consequences for future generations.

I don’t wish to catastrophise but there is also evidence that a mass extinction event whereby an irreversible tipping point or point of no return is on the cards if nothing is done about climate change.
It is simplistic to ban the extraction of fossil fuels completely like the 1963 treaty banned testing nuclear weapons in the atmosphere, the sea and in space. In the case of the test ban treaty there was no judgment call on which the parties could reasonably differ. Nuclear explosions in the atmosphere were poisoning the atmosphere across the globe, no question. With climate change there is a judgment call and a balance to be struck between stemming global warming and keeping modern life ticking over.

Humankind is organised in societies comprising a large number of states that all need to be on board if global warming is to be managed effectively. Some are dictatorships and some are democracies; some are large, and some are small; some powerful, others not. Some are rich and more able to withstand climate change and others, like Bangladesh and Madagascar, are not only poor but also more likely to be adversely affected by climate change.

There is also history to consider. Europe and North America have been responsible for the cumulative increase in global warming until China and India developed as major world economies in the 21st century emitting huge quantities of carbon dioxide in the process.

Finally, there are climate change deniers like former US President Donald Trump who believe the threat of global warming is fake science, and frivolous politicians of the apres mois, le deluge variety – an expression coined by King Louis XV of France in the 18th century as a byword for a hedonistic, selfish lifestyle.

The balance between the need for energy and the threat of global warming was struck by the 2015 Paris Agreement on Climate Change. The treaty was signed by 191 countries plus the EU.
The treaty sets a limit to fossil fuel emissions to limit temperature increase this century to 2 degrees celsius from pre industrial times in the 18th century. It provides for best endeavours to limit it to 1.5 degrees; stocktaking of countries’ contribution to managing climate change every five years; and financial assistance to developing countries to enable them to manage the adverse effects of climate change.
If nothing else the Paris Agreement provides the language and grammar of a balanced and sustainable development across the globe while reducing greenhouse gases and keeping each country on its toes by a Conference of the Parties every five years.

The gathering held in Glasgow at the moment (COP26) is the first after the 2015 Paris Agreement. It was supposed to take place in 2020 but had to be put back owing to the Covid-19 pandemic.
You would think that the pandemic would have concentrated the minds of states to manage global warming more effectively but the dynamic in relations between the big powers is not conducive to international cooperation.

In the event Russia and China did not send their heads of state to Glasgow and the president of China was not allowed to address the conference remotely, which was not very clever given that the ego of Xi Jinping needs to be massaged on climate change.

Queen Elizabeth II did address the gathering remotely on the first day of COP 26. It was a somber address commensurate to the task in hand, in contrast to Boris Johnson’s that was always one sentence away from a joke, which is fine in an entertainer but embarrassing in a prime minister.
She made a loving reference to the role her late husband Prince Philip, Duke of Edinburgh, played in warning of the dangers of polluting the atmosphere and how proud she is of him and of her son Charles and grandson William for their active commitment to protecting our “fragile planet”.

It would be wrong to speculate, as the BBC’s royal correspondent, Nicholas Witchell, does about the state of the Queen’s health save to say that at the age of 95 she was in great form.
She closed by reminding the conference of her long experience of the world’s great leaders and the difference between politics and statecraft. In effect she said that here-today-gone-tomorrow politicians are a dime a dozen. They are concerned with the government and politics of today, but she observed that what makes some political leaders great statesmen is what they do for the people of tomorrow, and expressed the hope that there was enough collective statesmanship to manage the climate emergency that has befallen planet earth at the beginning of the 21st century.