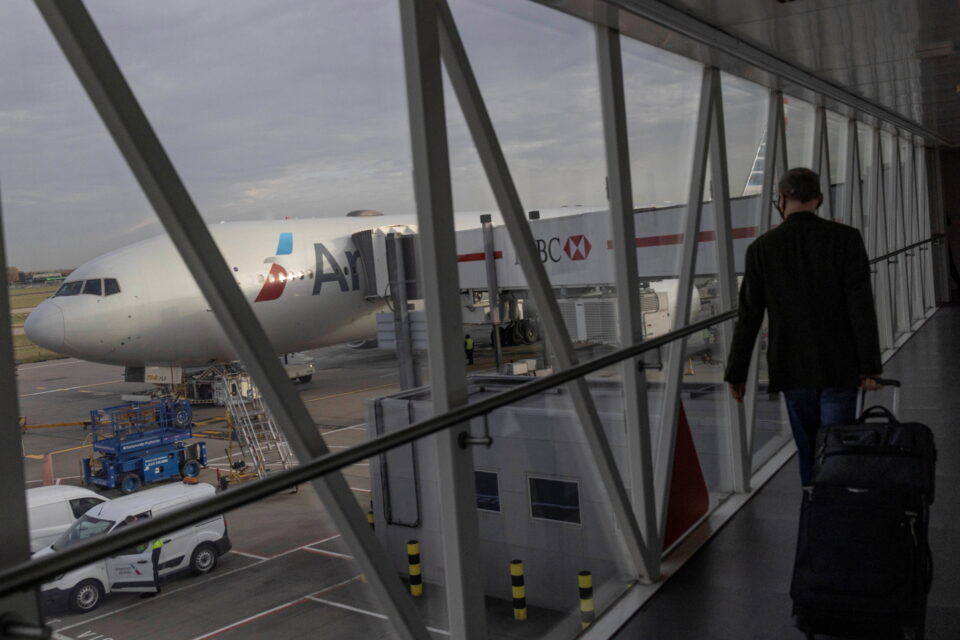 A man ready to board an American Airlines flight 101 to New York November 8, 2021. REUTERS/Carlos Barria

Packed intercontinental flights touched down and people embraced relatives at land borders on Monday after the United States lifted restrictions imposed on travellers from much of the world when the COVID-19 pandemic began.

The travel ban https://www.reuters.com/world/us/us-braces-surge-vaccinated-international-travelers-2021-11-07, first imposed in early 2020, had barred access to non-U.S. citizens travelling from 33 countries – including China, India and much of Europe – and had also restricted overland entry from Mexico and Canada.

“Today America is open for business. That is our message to the world,” U.S. Commerce Secretary Gina Raimondo told Reuters in an interview at Chicago’s O’Hare airport.

Jez Cartwright, 49, was one of the first passengers off BA001, the first British Airways flight to land at JFK airport from London’s Heathrow airport.

“It’s brilliant to be on a full plane again,” he said.

Earlier, on the other side of the Atlantic, travellers boarding planes at airports in Frankfurt, Paris and London said they were eager to reunite with family and friends.

“I was meant to go just before COVID happened, and obviously it’s been delayed this long, so it’s really exciting to finally be able to go,” Alice Keane, travelling to Miami to see her sister, said at London’s Heathrow airport.

Months of pent-up demand triggered a major spike in bookings on Monday, with travellers only required to show official proof of vaccination and a recent, negative viral test.

No major issues at airports were flagged in an early morning call between airlines and U.S. government officials.

The flights were full, Virgin Atlantic CEO Shai Weiss said on what he called a “major day of celebration,” while passenger volume was expected to remain high in coming weeks with the approach of Thanksgiving and Christmas.

In Mexico’s Ciudad Juarez, across from the Texan city of El Paso, a line of about 20 people formed early before crossing and embracing family on the other side of the border, a Reuters witness said. One of the people hadn’t seen their relatives in El Paso since March 2020.

“We thought they were going to tell us again that they had decided not to open it,” said Lorena Hernandez, stroking her grown-up daughter’s hair and smiling broadly after they were reunited in El Paso. “I said, if they don’t reopen, I’m going to take a plane.”

Some inoculated Mexicans will not be able to enter the United States immediately if they received vaccines in Mexico that have not been approved by the World Health Organization, such as China’s CanSino and Russia’s Sputnik V.

Hundreds of migrants have arrived at Mexican border cities such as Tijuana in recent days, hoping the reset will make it easier to cross and seek U.S. asylum, despite warnings from advocates that the re-opening is for people who have papers.

U.S.-bound travellers from Canada had to wait less than an hour at most border crossings on Monday morning with some longer lines at the Champlain, New York and Port Huron, Michigan crossings, according to the U.S. Customs and Border Protection website.

Marty Firestone, who owns Canadian travel insurance company Travel Secure, said October saw inquiries and purchases of travel insurance increase by 25% compared to the same month in 2019. “What you’ve got is tremendous pent up demand,” Firestone said on Monday. “When the announcement came out [that the U.S. border was opening] they were like, ‘I’m out of here.'”

The prospect of long queues, predicted by airport officials, did little to dent the enthusiasm of those preparing to be reunited with loved ones.

“I think we might just start crying,” Bindiya Patel, who was going to see her one-year-old nephew in New York for the first time https://www.reuters.com/world/the-great-reboot/grandmother-grandson-finally-meet-us-flights-reopen-2021-11-05, said at Heathrow, where jugglers dressed in the red, white and blue of the U.S. flag greeted travellers.

Restrictions on non-U.S. citizens were first imposed on air travellers from China in January 2020 by then-President Donald Trump and extended to dozens of other countries, without any clear metrics for how and when to lift them.

In January, Trump issued an order to lift travel restrictions on people in Europe and Brazil. But the order was reversed by President Joe Biden before it took effect.

U.S. allies had heavily lobbied the Biden administration, which had repeatedly said it did not endorse so-called “vaccine passports”, to lift the rules.

While cheering to the resumption of the two-way transatlantic traffic, airline officials stressed that tourism and family trips alone will not be enough for https://www.reuters.com/article/businessNews/idUSKBN2HT0JMcarriers whose profits depend on filling the most expensive seats.

Experts say the real battle of the transatlantic, the world’s most lucrative travel market, takes place at the front of the plane, in first, business, and premium economy class, where those paying the top prices help drive airline profits.

“As for business, we know the recovery is slower and so it’s a question mark,” said Air France-KLM commercial co-director, Henri de Peyrelongue.