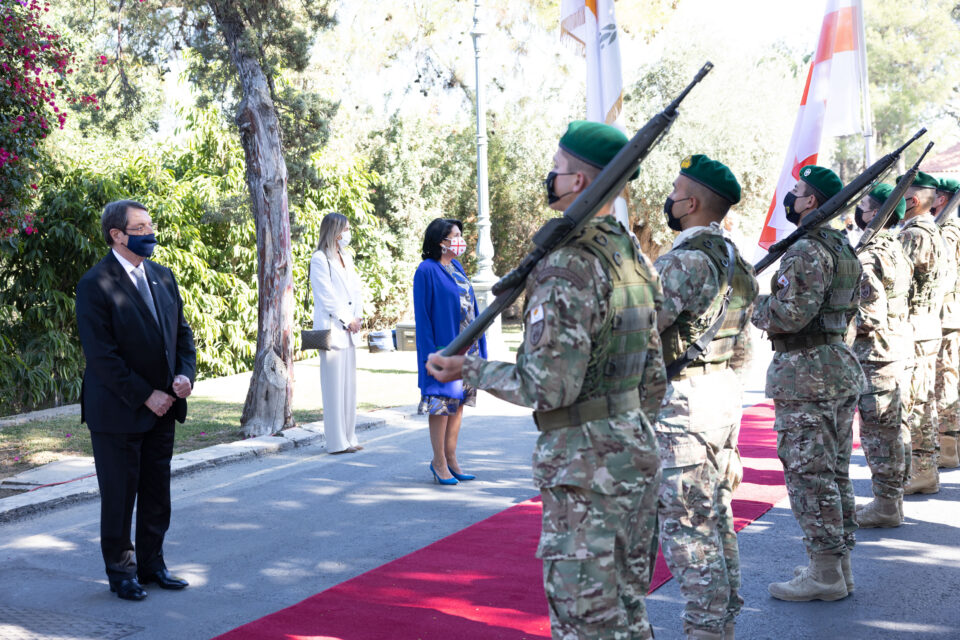 Georgia looks forward to Cyprus’ support for its European aspirations and recognises that it can learn from Cyprus, which followed the same path until it joined the bloc, President Salome Zourabichvili said on Tuesday following a meeting in Nicosia with President Nicos Anastasiades.

She noted the symbolism of the visit, the first official visit by a Georgian President to the island, following the first ever visit of a Cypriot President to Georgia in 2019.

On the agenda of the talks were the Cyprus issue, Georgia’s European aspirations, the Eastern Mediterranean, the situation in the Caucasus, bilateral relations, the pandemic and fighting corruption.

In his statement, Anastasiades said that Zourabichvilli’s visit to the island is a return of the warm hospitality that he and his delegation received in Georgia in 2019. He said the reciprocal visits are important milestones in the efforts to strengthen the cooperation of the two countries at bilateral and multilateral level.

He referred to the long-standing and excellent relationship between the two countries and the historical, cultural and religious ties, emphasising that the Georgian community is one of the oldest Orthodox communities on the island. The president said that Cyprus highly appreciates the community’s activity and presence on the island and this is why it granted land in Gialia village for the construction of a monastery where a Georgian church stood many centuries ago.

According to the President, during the talks they discussed developments in the Caucasus and Nagorno-Karabakh and security issues in the Black Sea, the situation in the Eastern Mediterranean due to recent developments in Iraq, elections in Libya and instability in Lebanon and Syria.

Georgia-EU relations were also on the agenda in view of the Eastern Partnership meeting scheduled for December, with Cyprus having given support for efforts to deepen Brussels-Tbilisi relations.

The President expressed Nicosia’s deep appreciation for Georgia’s stance on the Cyprus issue and stressed that Cyprus adheres to the same principles regarding the national problem of Georgia.

The Georgian President referred to the common history of the two countries and their common problems and the great appreciation of the people of Georgia for the concession of land for the construction of the monastery. She said that this is highly valued because Georgians are used to have land taken away from them, not granting them land.

She went on to say that the two countries enjoy almost 30 years of diplomatic relations and need to take the next step to raise them even higher in many areas.

Regarding her country’s accession to the EU, she said that she looks forward to further support from Nicosia, saying that the EU presence in Georgia and its participation in the Caucasus issues and what is happening there is necessary. Zourabichvili said it is important to strengthen bilateral relations in the cultural sector as well, and said that Georgian cultural days should be held in Cyprus and Cyprus days in Georgia on the occasion of 30 years of diplomatic relations next year.

Later in the day Zourabichvili met House president Annita Demetriou and the Archbishop.