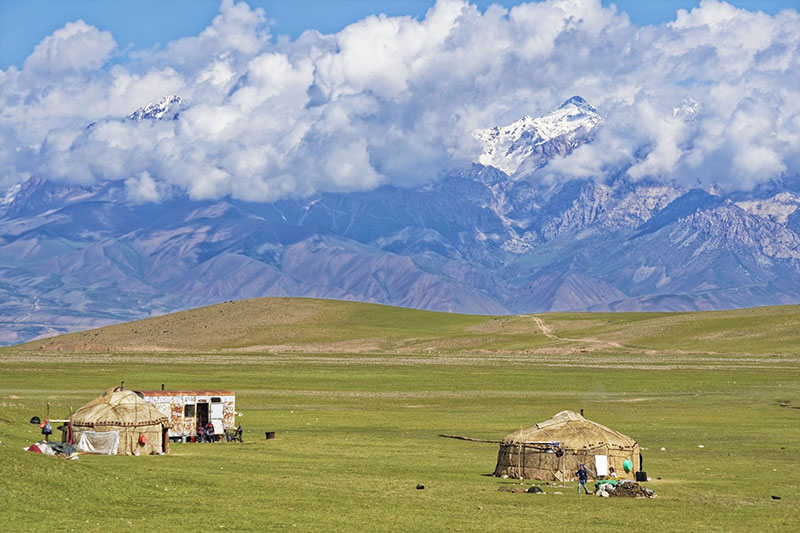 Wild, free and mountainous, Kyrgyzstan is often described as Central Asia’s Switzerland. This landlocked nation is a land of yurts and steppes; a nomadic culture in which, even today, just 36 per cent of the six million residents are based in an urban location.

Kyrgyzstan only attained sovereignty after the breakup of the Soviet Union in 1991. But the flag still pays tribute to the nation’s beginnings: its 40-ray sun surrounding a wooden crown of a yurt a direct homage to the original tribes and the itinerant lifestyle.

Horses have always been integral to life in this mountainous nation, and the Kyrgyz have been breeding horses for more than 4,000 years. Essential for warfare (warriors were buried with their horses) and a crucial part of the dowry, horses are still immensely valued. The children of the steppes learn to ride before they walk, and stealing a horse was once punishable by death. So it’s no surprise that the national dish of Kyrgyzstan should be heavy on the horsemeat…

Called beshbarmak (which loosely translates as ‘five fingers’, given that it’s eaten with the hands) the dish is a favourite at births, birthdays, anniversaries and funerals, and consists of horse meat boiled in its own broth for several hours before being served over homemade noodles sprinkled with parsley.

Other meat dishes (which might include horse, but nowadays are more often mutton or chicken-based) include paloo (pieces of meat fried in a large qazan or cast-iron cauldron, and mixed with fried shredded carrots, garlic chives and rice) and dimlama (a stew of meat, potatoes, onions, vegetables and fruit). But there’s also kuurdak (fried meat with onions, potatoes and garlic); shorpo (a meat and veg soup with added radishes); and shashlik (marinated kebabs served with raw onion).

Less hearty foods do exist. Laghman eschews the meat in favour of thick noodles covered in chopped peppers and served in a spicy vinegary sauce, while breads are generally flat, fried and sturdy. But to drink, we return once more to the horse… And to kymyz, a traditional drink made from fermented mare’s milk that purportedly puts a real spring in the steppe!