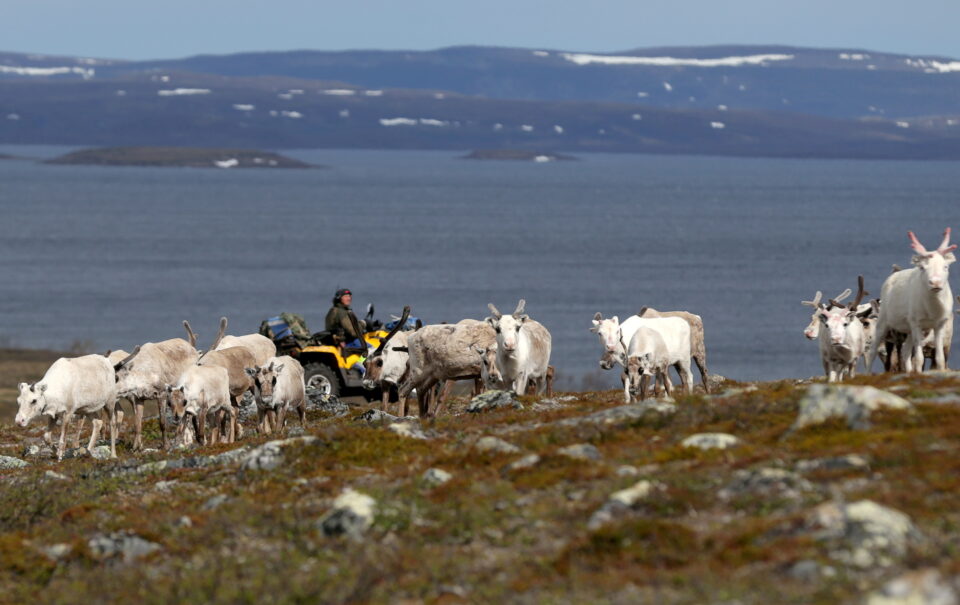 A Sami reindeer herder tends to his flock on the Finnmark Plateau, Norwa

Norway should dismantle two large wind farms that were stripped of their licences for jeopardising traditional reindeer husbandry, herders from the indigenous Sami community said on Friday.

“There is no doubt. The turbines are illegal, so they have to come down, sooner or later,” Fosen reindeer herding district leader Terje Haugen told Reuters after meeting with the country’s energy minister, who visited the wind farms on Friday.

But the court’s verdict did not say what should happen next to the 151 turbines, which can power around 100,000 Norwegian households, or to the dozens of kilometres (miles) of roads built to facilitate the construction. The owners of the wind farms hope for a solution that will allow them to stay.

Reindeer herders in the Nordic country say the sight and sound of giant wind turbines frighten their animals and thus disrupt age-old traditions.

The turbines remain in operation, however, and the government is seeking to resolve what it has described as a complex legal and political quandary.

A light dusting of snow covered the ground around the giant turbines situated atop the Storheia and Roan mountain plateaux during Friday’s visit by Marte Mjoes Persen, Norway’s minister of energy and petroleum.

“It’s nice to meet those who are directly affected by the wind farms. It was good to see it with my own eyes because it provides a deeper understanding of what the issue is,” Persen told Reuters after meeting with the herders.

She declined to say whether the turbines should be taken down, or what other steps she may consider, but said Sami representatives had been invited to participate in the decision-making process that will follow.

“We live in a democracy and therefore it’s important to take the decisions in a right way,” Persen said.

Storheia and Roan are part of a six-part 11 billion Norwegian crowns ($1.27 billion) development in the area that has become Europe’s largest onshore wind farm. The four other sections were not challenged in the lawsuit.

The supreme court unanimously ruled on Oct. 11 that the construction of the wind farms in the Fosen district had violated the herders’ cultural rights set by international conventions designed to protect indigenous minorities.

The president of Norway’s Sami parliament, an elected, consultative body representing the indigenous minority, said the only way forward was to remove the turbines.

“The court decision must have consequences. And the consequence is that the wind farms need to be removed,” Silje Karine Muotka told Reuters.

“This is an opportunity for the minister to make right the wrongs of many others,” she said.

Lawyers for the Sami herders say the ruling by Norway’s top court could impact other projects across the country’s central and Arctic northern regions where mining, construction and electricity developments remain a source of conflicts.

Norway, western Europe’s biggest oil and gas producer, aims to boost its output of renewable energy, such as wind power, in preparing for a transition towards a greener economy.

A herder in the northern Fosen district, Sissel Stormo Holtan, said she was impatient and didn’t see the need for a visit to the wind farms.

“How many times do you need to discuss a Supreme Court ruling?” she asked.

‘Down’ and ‘out’? COP26 wording clouds way ahead on climate