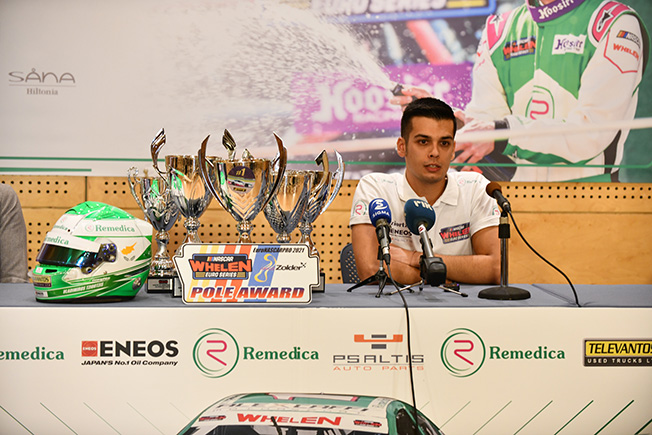 Cypriot driver Vladimiros Tziortzis reviewed his season in the NASCAR Whelen Euro Series, where he finished in sixth place in the standings

2021 was a much better year compared to 2020 where he was a rookie in the NASCAR Whelen Euro Series, said Vladimiros Tziortzis during an end-of-year press conference, where he reviewed the past year.

“We had five podiums in 12 races compared to two podiums last year,” explained the Cypriot driver who again this year competed with the support of the Cypriot pharmaceutical company Remedica, driving for Academy/Alex Caffi Motorsport.

“Some mechanical problems may have deprived me of a place in the top three of the championship standings and instead eventually brought me a sixth place finish among 30 drivers from around the world, However, 2021 certainly leaves me more satisfied compared with 2020, “If we did not have these problems, I might even have made the podium ten times,” he added.

“It is very important that the flag of Cyprus rises high in international competitions. By supporting Vladimiros, we want to inspire other young people to get involved in sports as they are high on the pedestal of our priorities,” said Remedica Marketing Director Yiota Panagiotou. “Vladimiros is a great athlete who stands out for his discipline, determination and professionalism, characteristics that are an example for young people and values shared by Remedica.”

Also present at the press conference were Phivos Zachariadis, Advisor to the President of the Republic on sports, Nayia Kontopoulou on behalf of the Cyprus Automobile Association, Iakovos Hagop Demirtzian on behalf of Eneos Motor Oil Cyprus & Psaltis Auto Parts and Victoria Avraamidou, Frederick University spokesperson.

Participation in the Nascar Whelen Euro Series in combination with taking in one of the two championships that also offer a Young Drivers Program are the goals of Tziortzis for 2022.
Regarding his participation in the Euro Series, Tziortzis added: “We now have the time to decide in which team I will participate in 2022, but also we will decide whether I will stay in the EuroNascar 2 category or if I move up to PRO.

“The prospect of Academy/Alex Caffi Motorsport is always on the table and we will discuss the new season plan in the coming days.
“Besides, the presence in a team together with former F1 world champion Jacques Villeneuve helped me a lot, especially in telemetry during the race weekends.”

In a symbolic gesture of appreciation at the end of the conference, Tziortzis presented Remedica with a painting depicting snapshots from his performances this year, which was created by young Cypriot artist Antonis Koudellis.