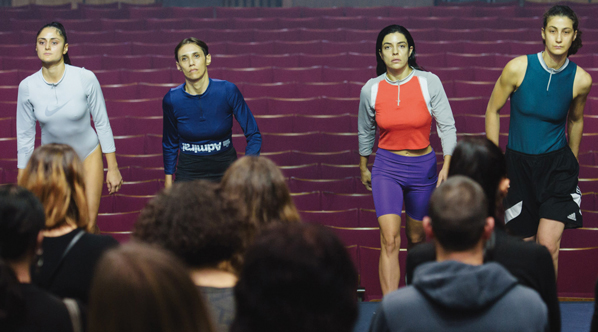 Continuing to bring artistic performances to the capital city, the Nicosia International Festival has more exciting shows, plays and concerts this week. This Thursday 25, the Main Stage of ETHAL premieres at the Festival with the award-winning play by Mark Medoff, Children of a Lesser God.

Lea Maleni, 20 years later, returns with Children of a lesser God, this time not as a protagonist but as a director, giving her own special look at Medoff’s play. The Tony Award-winning play, 42 years after its first theatrical release and 35 years after its successful transfer to the big screen, continues to thrill as it deals with human relationships and their anxious quest for communication.

The story begins with James Leeds, a speech therapy teacher who specialises in people with hearing and speech problems, when he undertakes to teach sign language at a school for the deaf. There he meets the young, also deaf, Sarah and quickly begins a strong love affair. Sarah, living on the margins and experiencing social exclusion and rejection even from her loved ones, is closed in her silence and refuses to meet the world of the ‘normal’, which has hurt her so much.

On Friday 26, five female artists, under the direction of Elena Antoniou, will take the stage of the Nicosia Municipal Theatre, occupying the space and time allotted to them. Their performance titled WISH explores the relationship between the beholder and the person being observed; the women who experience the piercing gaze of Others. Through the performance, the women question whether they can redefine the boundaries set by the body by looking straight back into the eyes of the spectator and what there is to be done so that women finally reclaim the space they deserve.

The week will close with another theatrical performance. Tom Holloway’s Red Morning Sky premieres in Cyprus this Sunday 28 at the festival under the direction of Paris Erotokritou. Translated into Greek, this production combines elements from cinema, television, music and theatre, attempting radiography of our inner world, bringing the story of three family members to the Cypriot stage.

Children of a Lesser God