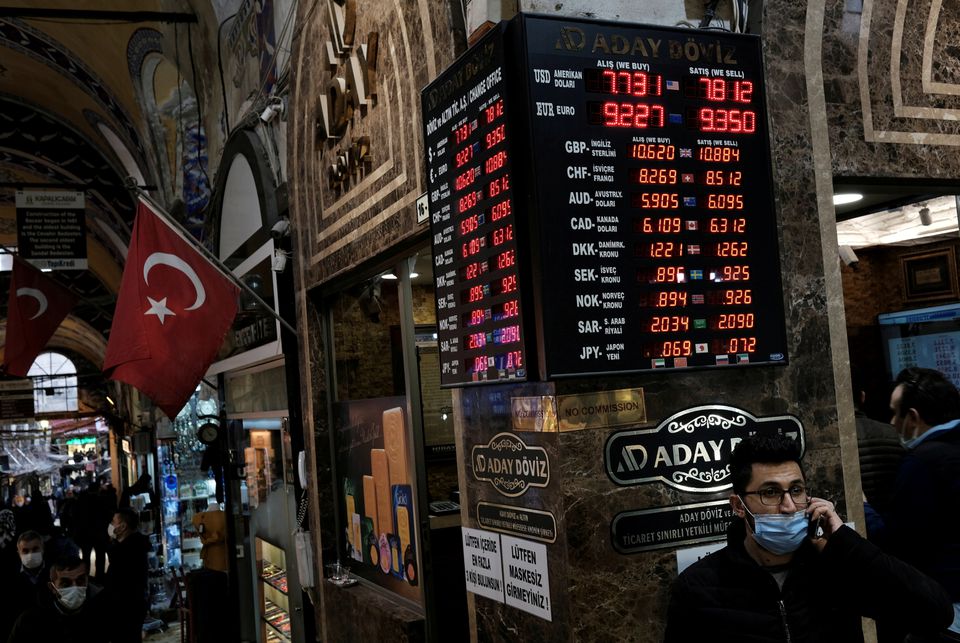 The lira’s plunge has propelled Turkey’s exporter-dominated stock market to its best month in 12 years, but for foreign investors, who have just started dipping their toes in again, it’s a very different story.

The stock rally, taking in exporters such as steel producer Iskenderun Demir (Isdemir) (ISDMR.IS) and glass maker Sısecam (SISE.IS), has seen Istanbul’s $37 billion main bourse (.XU100) soar nearly 20 per cent in November, which is almost as much as the lira has slumped.

Emerging economy stock markets often surge when their country runs into trouble because locals see equities as a relatively safe asset as companies either ramp up prices to offset spiralling inflation or benefit from a weaker domestic currency if they export overseas.

Big money international investors are in the opposite situation though. They usually have to convert whatever they hold back into dollars or another major currency, meaning they see a huge fall in value.

MSCI’s dollar-denominated index of Turkish shares (.dMITR00000PUS), for example, slumped 9 per cent during Tuesday’s brutal lira rout, by which time it was down 20 per cent this month and 30 per cent since the start of the year.

The currency slide – triggered by an unorthodox policy promoted by President Tayyip Erdogan of slashing interest rates, in the hope of boosting the economy and jobs, while inflation hovers near 20 per cent – has at least left Turkish shares historically cheap and for some investors, a useful hedge against losses elsewhere.

“When we look at the stock market in dollar terms (it) is very cheap historically,” Ozaner added.

Many Turkish exporters are benefiting from the lira’s slump coupled with the world economy’s bounceback this year from the initial COVID-19 shock. Isdemir reported that third-quarter net profit leapt 657 per cent from a year earlier to 3 billion lira ($242.09 million), while Sisecam’s third-quarter profit of 1.35 billion lira beat expectations by 6.5 per cent.

It hasn’t gone unnoticed. Foreign investors bought $384 million worth of Turkish stocks in the seven days ending Nov. 19, after recording their biggest weekly inflow in a year with $480 million as of Nov. 12, according to central bank data. Total net transactions of foreign investors stood at $1.14 billion in the first three weeks of the month.

“Since foreign investors are getting cheap lira in the swap market, they borrow and take positions in the market. I believe, the central bank won’t hike rates and will continue with rate cuts. This is the new Turkish economic model; high inflation, high (dollar/lira) levels, low interest rates,” Ozaner said.

The damage done by more than a decade of lira weakness – Turkey’s currency has nosedived nearly 90 per cent since 2011 – is clearly evident though.

Bank for International Settlements data shows that nearly 20 per cent of Turkish companies’ revenues were being used just to make interest payments at the end of March. Back in 2011 it was just 7.4 per cent.

For dollar-based international investors, MSCI’s Turkey index is also exactly where it was after the major lira crisis in 2018 when worries about overborrowing and poor relations with the then Donald Trump-led US government hit hard.

MSCI’s main world share index (.MIWD00000PUS) which includes 50 countries is up 50 per cent over that same period.

Emerging markets strategist at SEB, Per Hammarlund, thinks caution is therefore still required, especially if the currency crisis escalates, triggering emergency rate hikes or even capital controls which would prevent investors getting their money out.

“At that stage the stock market would look overvalued even if it looks cheap now,” said Hammarlund. “This economic experiment is bound to fail I think.”