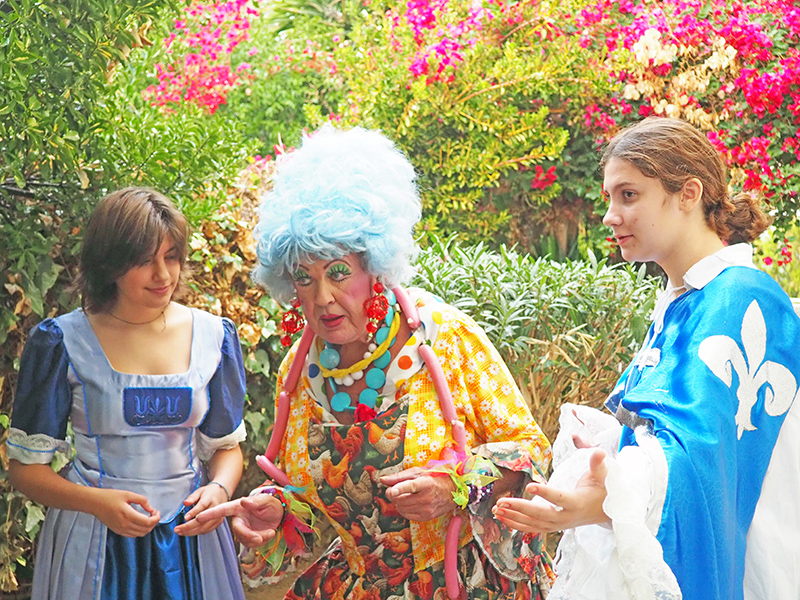 As it’s coming up to Christmas the panto is back. Alix Norman looks forward to a performance of The Three Musketeers

If it’s Christmas, it must be panto time. And while the pandemic put the kibosh on last year’s performance, this December the Anglo Cypriot Theatre is back: cast and crew adding a magical spin on Alexander Dumas’ classic tale of The Three Musketeers.

Those who are familiar with the British institution of the Christmas pantomime well know they’re in for an hour or two of fun and frolics – and more than a little audience participation! “Pantomimes are fun: a chance to enter the realm of fantasy, enjoy a vivid spectacle of colour, singing and dancing, laugh at the endless jokes and join in with the action – booing at the baddies and encouraging the goodies,” explains director Mike Baulch.

He should know: Mike has been at the helm for the last three Act pantos, directed 14 of the group’s productions, and taken leading roles in many more. He’s even a celebrated playwright: his dramatisation of Jane Austen’s Emma has been staged by theatre groups across the UK!

Under his aegis, The Three Musketeers is well on track for four sensational performances, which will take place at the Russian Cultural Centre in Nicosia on December 11 and 12. Rehearsals have been underway for months, the set’s being painted (and WILL be dry on the night), dazzling costumes are being constructed, and the dancers (courtesy of the London School of Ballet) are perfecting their twirls. In fact, everything is ready for a Christmas performance that will delight, astound, and enthral…

The plot follows protagonist d’Artagnan (a young, brash swordsman, played by Anastasia Vernhes) who, frustrated by life on a Gascony pig farm, sets off for Paris to enlist as a musketeer. But close on his heels – determined to lure d’Artagnan back to the bucolic life – is his mother, Desiree (played by Graham Thomas).

Our hero, however, is unswayed by his mother’s pleas. In the capital he’s already found both love (in the form of Constance, lady-in-waiting to the Queen) and trouble having rashly challenged three of the infamous musketeers (Nadine Tsielepis as Porthos, Shaunna Joannidou as Athos, and Ariadne Andreou as Aramis) to a duel. But before things can go from bad to swordpoint, the Crown Jewels go missing. And worse, the Queen of France is kidnapped and tossed into the Bastille – all part of a devious plot from the dastardly mind of Cardinal Richelieu, who plans to oust the King and rule in his stead.

The musketeers (now with d’Artagnan in tow) abandon their feud and rush to the rescue. But as the evil Cardinal (John Williamson) ups his plotting with help from foreign agent Malady de Splinter (Kat Yiacoumis), things are beginning to look bleak for King, Queen, jewels and country…

Can d’Artagnan, the three musketeers, and their unlikely comrade-in-arms Dame Desiree succeed in rescuing the Queen, recovering the jewels, and thwarting the evil ambitions of Richelieu – and all in the space of an hour-and-a-half? Will Constance fall happily into the arms of her love, or be forced to mourn his untimely death? And what has a chap called Plonqueur to do with all this?

With its decidedly French flavour, this year’s pantomime takes advantage of all things Gallic (it’s rumoured a troupe of can-can dancers will be high-stepping across the stage, and that the resident Bastille ghost will be making a particularly spine-tingling appearance) to give audiences a show to remember.

“The Three Musketeers contains all the magical elements of a traditional Christmas pantomime: fantasy, humour, the battle between good and evil, spectacular sword fights, and oodles of singing and dancing,” enthuses Mike. “And after the events of the past two years, there’s no better way to celebrate the season than with a Christmas pantomime.”

For 30 years, the Anglo Cypriot Theatre’s pantomime has ushered in Christmas with its light and laughter and, after last year’s pandemic-induced hiatus, “it feels very special to be back,” Mike acknowledges. “The pantomime is a wonderful chance for the entire family to enjoy a trip to the theatre: kids adore the mayhem and mishaps, and the chance to interact with the actors; adults will chuckle at the topical jokes and thrill to the audience participation.”

This annual extravaganza is, quite simply, the theatrical event of the season. And with the production supporting Cans for Kids (proceeds from the charity go towards the purchase of medical equipment for the children’s wards at Cypriot hospitals), the Anglo Cypriot Theatre’s performance of The Three Musketeers promises to be a much-needed chance to both do and feel good this Christmas.

Act’s Christmas pantomime, The Three Musketeers, takes place at the Russian Cultural Centre on Saturday 11 December (3pm & 7.30pm) and Sunday 12 December (11am & 3pm). Tickets are €12 (€8 for children aged 2-12 years) and are available from www.SoldoutTicketbox.com and Stephanis stores across the island