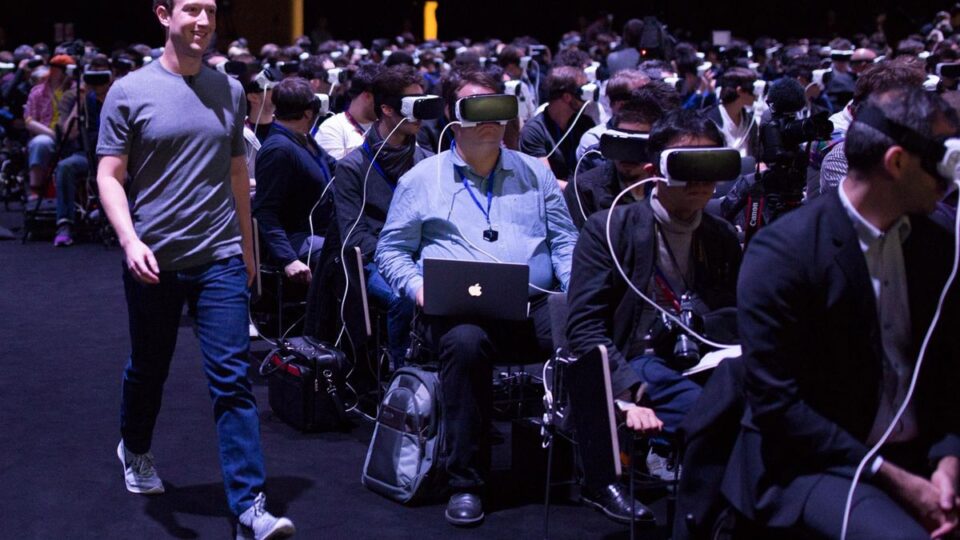 This is Mark. Mark wants to “change the way we [humans] live our lives FOREVER”. Here he is in his T-shirt, jeans and sneakers walking casually down the isle of the 2014 World Mobile Conference, manifesting his vision with a smile on his face, just having bought market leaders in VR technologies Oculus Rift for an eye-popping £1.4billion. The humans seated cosily around him in their business suits and goggles are roaming the intersubjective virtual landscapes Mark designed for them. A poetic photo for future digital archaeologists.

Outside the physical conference room planet Earth is heating bit by bit [pun intended], day by day. I’ll spare the overload of climatic data, like 60 per cent of the Earth’s wildlife having disappeared forever in the last 40 years and instead draw attention to the impact the physical gadgets we buy, use and dispose of in roughly two-year cycles, have on climate change.

Though virtually all our gadgets say “Made in China” the reality is that they are composite machines whose dozens of elements are extracted by private mining companies from specific locations worldwide. Their aluminium is most likely mined in Canada, bismuth in Mexico, arsenic and copper in Chile and indium and silver in Peru. Congo is a source for cobalt, Guinea for gallium, Kyrgyzstan for mercury, Kazakhstan for vanadium, Tajikistan for antimony. Tin is probably from Indonesia, titanium and nickel from Australia and ruthenium, Russia.

And how about lithium this vital element which ‘green’ electric cars require? Currently lithium comes almost exclusively from Zimbabwe, but there are two other countries with enormous amounts warming up for business. One is Bolivia, regardless of whether Morales agrees or not and the other Afghanistan, whose 1 trillion worth of deposits are being eyed by Chinese companies. The tragic paradox is evident especially when we consider the irreversible damage mining does to the earth.

This is the existentialist conundrum the younger generation is destined to inherit and face in future. On one hand they are presented with a utopian techno-digital future of virtual landscapes, green cars, active homes, regenerative medicine, clean nuclear energy and space exploration and on the other hand scientists worldwide present them a dystopian future in which the earth’s landscape has been degraded beyond repair.

Can these two futures co-exist? Well, the great majority of sci-fi novels, anime, TV series and films would agree as they explore more or less this question. From The Foundation to Dune, to Bladerunner, MadMax, Total Recall, Terminator, Waterworld, Tribes of Europa, The Matrix, Ghost in the Shell, Neon Genesis Evangelion, Wall-E, 3%, The 100. Instead of modern prophesies we can welcome these works as cautionary future narratives inspiring us to imagine positive ones. Yet recent research has shown that when the youth imagine their future they feel ‘sad’, ‘afraid’, ‘anxious’, ‘angry’ and ‘powerless’ rather than exuberant and joyful.

In mid September this year a survey of 10,000 young people between the ages of 16-25 across 10 countries was published by the prestigious Nature journal exploring what the youth feel about climate change. Led by the university of Bath in collaboration with five other institutions it was one of the largest studies ever of its kind. The study revealed that four out of five young people are “extremely worried” about climate change and that they believe “the future is frightening.” The actual term employed is “eco-anxiety.” Furthermore 65 per cent of the respondents agreed that governments are failing the youth in regards to climate change and 64 per cent agreed that the governments are lying about actions taken.

“This study provides arguments for anyone who has any connection to youth mental health — climate change is a real dimension into their mental health problems,” says Sarah Ray, a scholar on climate anxiety at Humboldt State University in Arcata, California. The results she adds could be used in climate change lawsuits as they might provide evidence of moral injury under human-rights law. What was particularly striking was that 81 per cent responded that when they attempt to raise the issue to elders they are either ignored or dismissed.

“There is a general ‘othering’ of children in society, and children’s voices that threaten the predominant narrative of the most powerful group in society,” explains the study’s co-author Caroline Hickman, a climate-psychology researcher at the University of Bath.

What this research clarifies is that youth eco-anxiety has a root cause and that is governance, not merely in regards to climate change, but governance in general. The youth, having been raised in a digital world, fully comprehend the potential for a utopian future. The problem is that while we are entering the so called “quantum field” of day-to-day interactions, the political patriarchy in control of the mantle of society function in the same cartesian logic they inherited from their fathers and forefathers, whose philosophical system was brewed in feudalism, colonialism, world wars and grand narratives.

The latest offspring of this archaic logic is of course capitalist ideology itself. That governments consider it economically sound for Mark, Jeff, Elon and Bill to be worth trillions is a direct result of this archaic socio-economic paradigm, characterised by hierarchies, segmentations and overlords.

Two years into the pandemic, global society has been forced adapt socially, suffer psychologically, stress economically and compromise basic liberties while the political elite, as with the climate crisis, has not even raised the possibility of challenging capitalism’s basic premises. Their preference in turn to scientific data is selective. When implementing new covid measures they make sure to highlight that they are following advice from their epidemiological teams yet they ignore the advice from thousands of environmental scientists about actions that need to be taken to tackle the climate crisis.

Two other surveys, one from the UK and the other from the US, confirm the dissatisfaction the youth feel with capitalism in particular. The UK report which was published in July by the right-wing thinktank the Institute for Economic Affairs (IEA) revealed that around 75 per cent of the youth believe the climate crisis is “specifically a capitalist problem”. At the other side of Atlantic, at the heartland of laissez-faire economics, a Harvard University study in 2016 revealed that more than 50 per cent of young people in the US reject capitalism.

So which pill are we choosing to take? The red or the blue? Or is a violet capitalist cocktail of both being forced down our throat? A utopian digital existence superimposed over a dystopian ecological decadence. It needn’t be this way. We don’t have to manifest our sci-fi fantasies. We can enjoy them for what they are: science-based artworks of fiction. And while enjoying them, grant the vast and intricate ecosystem of the Earth the ontology it merits and the youth of today and tomorrow the right to voice the future they deserve.

Alexis Karkotis holds a BSc in Ecology and a PhD in Social Anthropology. He has conducted extensive ethnographic fieldwork amongst indigenous cultures in Panama. His latest research focuses on the socio-economic and environmental impacts of emerging technologies