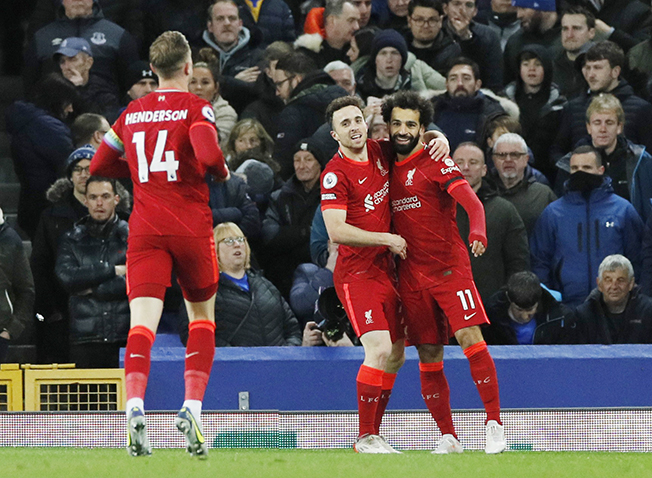 A beautiful, curling shot from Jordan Henderson put Liverpool ahead in the ninth minute before the midfielder set up Salah with a fine through ball and the Egyptian provided a clinical finish to make it 2-0.

Everton looked to be on the ropes but they found a way back into the game seven minutes before the break, with Demarai Gray, after good work from Brazilian Richarlison.

The home side stuck at the task but Liverpool put the contest beyond doubt with Salah whisking the ball away from Seamus Coleman and providing the coolest of finishes.

Diogo Jota completed the rout with an outstanding finish, the Portuguese forward spinning away from Allan, with a brilliant turn, before blasting past Jordan Pickford’s near post.

Liverpool are in third place on 31 points, a point behind Manchester City and two adrift of leaders Chelsea.

Ziyech winner at Watford keeps Chelsea top
Chelsea maintained their lead at the top of the Premier League as Hakim Ziyech came off the bench to secure a hard-fought 2-1 victory at Watford on Wednesday.

Thomas Tuchel’s side were not at their best at Vicarage Road but had enough quality to emerge with three important points.

After a 32-minute suspension while a fan was treated for a medical emergency, Chelsea took the lead when Mason Mount coolly converted after a well-worked move in the 29th minute.

But Watford deservedly levelled before the break through Nigerian Emmanuel Dennis.

Ziyech came on for injured defender Trevoh Chalobah on the hour and struck the winner 12 minutes later with the outstanding Mount turning provider.

Chelsea lead the standings with 33 points from 14 games while Watford are just one place and three points above the relegation zone.

Silva strikes stunner as Man City edge Aston Villa
Sublime first-half goals from Ruben Dias and Bernardo Silva helped Manchester City to a 2-1 win at Aston Villa in a pulsating Premier League clash on Wednesday with the home side pulling one back through Ollie Watkins.

The result left City second in the standings on 32 points from 14 games, one behind leaders Chelsea, while Villa stayed 13th on 16 points after their first defeat under new manager Steven Gerrard following two successive wins.

City dominated the opening half and took a 27th-minute lead through Dias, when the Portugal centre back beat goalkeeper Emiliano Martinez with a first-time shot from 20 metres after Raheem Sterling’s cutback flashed across the penalty area.

Silva doubled their advantage with a breathtaking effort in the 43rd, volleying superbly past Martinez from 15 metres after City broke away from their own penalty area with Riyad Mahrez releasing Gabriel Jesus on the right flank.

Villa sprung back to life shortly after the break as Watkins found space in a crowded penalty area to drive in a half-volley inside the near post from 10 metres after he met a low Douglas Luiz corner.

The home side missed a gilt-edged chance to salvage a draw in the 75th minute when City keeper Ederson parried a sitter from substitute Carney Chukwuemeka and the visitors held on in the closing stages.