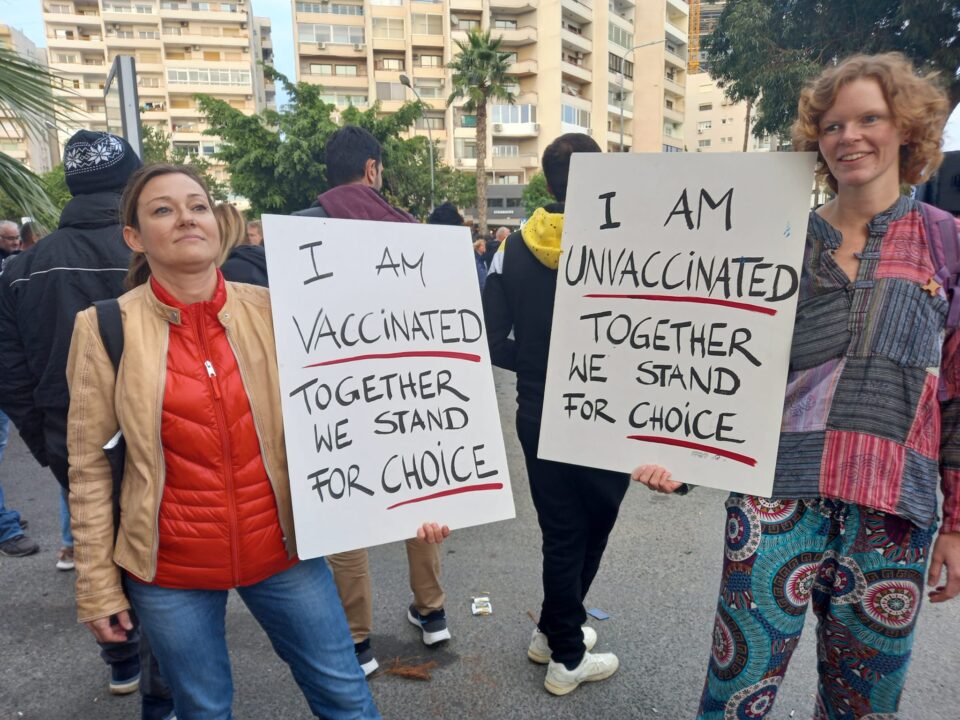 Scores of people gathered in Limasssol on Saturday afternoon, to protest the government’s most recent measures against coronavirus.

Centred on freedom of choice, the peaceful demonstration began around 3pm at the Enaerios area of Limassol, drawing groups of protesters from around the island, according to the organisers.

Local media reported a heavy police presence overseeing the protest and monitoring traffic, but no incidents.

Videos published on social media show hundreds of people of all ages in signs attendance, none of them wearing masks, some holding several signs and banners.

One person’s poster read “Say No to SafePass” while another said “Parents, what will you do when they tell you your children can’t get into class without a vaccine? Wake up”.

“I won’t tell you what to do, because we are not sheep,” Natalie, a mother from Paphos said while addressing the crowd in a video posted on Facebook.

“We are not sheep! We don’t follow crowds, we don’t bow our heads; we are humans,” she said.

“I asked my daughter what she wants to do…do you want to wear a mask, get a test and go to school? She said, I really want to go to school, but without all that.

“We teach our children to bow their heads, to not listen to their wants and needs,” she finally said. “We are preparing them to be slaves”.

Last week, cabinet decided on a number of stricter measures in an effort to curb the spread of the virus after daily case numbers and hospital admissions shot up, putting pressure on the healthcare system.

Most of these measures went into effect on Monday, among them a mask mandate and SafePass requirement for children as young as six, which prompted protests from parents throughout the week.

Parents gathered outside the education ministry’s offices in Nicosia, Limassol and Paphos for several days, with hundreds demanding access to the latest House education committee session earlier in the week.

On Friday, the government decided to place guards at some schools after hours and increase police patrols in the wake of several attacks at schools, including arson and a bombing.