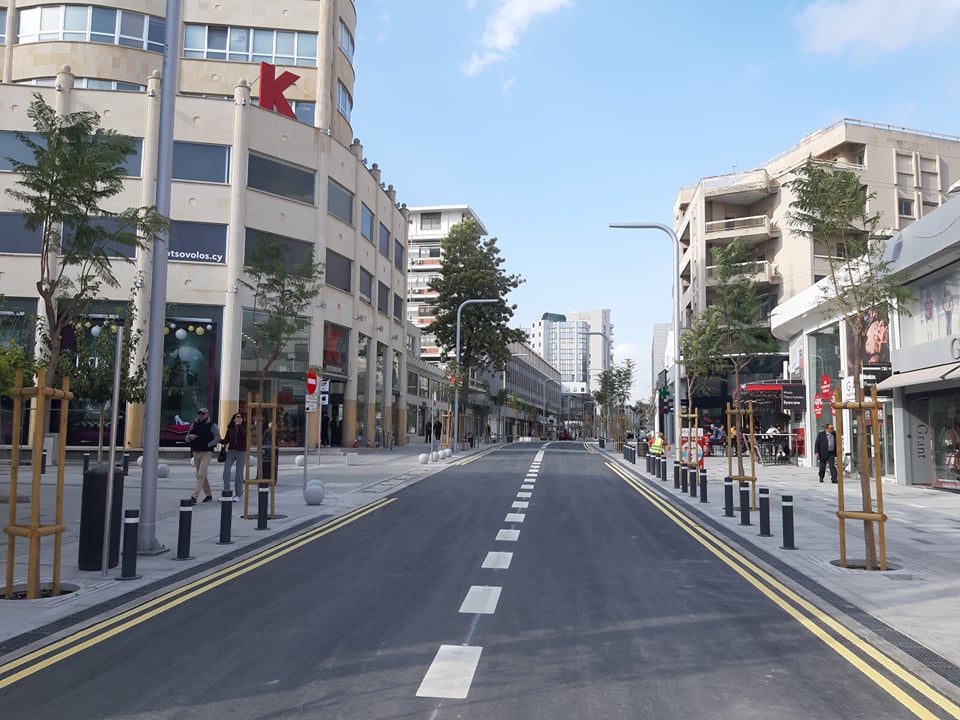 The revamped Makarios Avenue was officially handed over on Tuesday, but decisions are still pending over whether private vehicles will be allowed to drive on it.

“Just as we had promised, today we receive this much-anticipated project,” Nicosia mayor Constantinos Yiorkadjis said, inviting the public to experience it for themselves from Wednesday, when it will officially reopen.

The mayor spoke excitedly of the revamp, which has made the capital’s main commercial street more accessible and pedestrian friendly.

“Pavements have been widened and made single level to accommodate pedestrians and ease access for people with disabilities, while the trees that have been planted along the avenue will provide shade on hot summer days”.

At the same time, benches and small squares – a new feature – can be found in several spots along the road.

“When we took over the very difficult job of rejuvenating Nicosia’s urban centre after decades of decline, a lot of people didn’t believe in us,” the mayor said, “but our commercial centre is being upgraded aesthetically and functionally”.

The regeneration of not only Makarios Avenue, but also streets in the surrounding area like Stasikratous and Mnasiadou, are making the area more competitive, attracting more visitors and moving towards a permanent rejuvenation, he added.

The completion of more works along the Venetian walls, Eleftheria Square and old GSP stadium, will result in a “beautiful walking route for Nicosia,” Yiorkadjis said, borrowing the phrase from the mayor of Athens, “which I am certain will attract visitors and their families, to walk, shop, eat at restaurants and generally spend more time in our revamped centre”.

Asked whether the debate on vehicle access, which has been raging for months, has been resolved, Yiorkadjis was inconclusive.

Two weeks ago he had said that private cars would be allowed on the street for one year while final decisions are made, but he seemed to have changed his tune on Tuesday.

The municipality’s original plans proposed only allowing authorised vehicles to pass through the avenue, meaning buses, taxis, and private vehicles of people who live or work locally.

However, Yiorkadjis explained that this has been delayed as the proposal involved an automatic camera monitoring system, which has not been implemented yet.

As a result, the municipality suggested temporarily opening Makarios as a one-way street, with one bus lane and one lane for private vehicles, which was rejected by the traffic research committee, made up of the public works department, the town planning department and the police.

“We are now waiting for the police to respond by offering an alternative traffic plan,” Yiorkadjis said.

Until then, it was decided that Makarios Avenue will be pedestrian and bicycle only for the Christmas season – from when it opens on Wednesday to January 15, the mayor said.

The municipality is planning a grand reopening on Saturday to coincide with a series of Christmas events, including a pop-up market, carol singing, and a switching on of the Christmas lights.