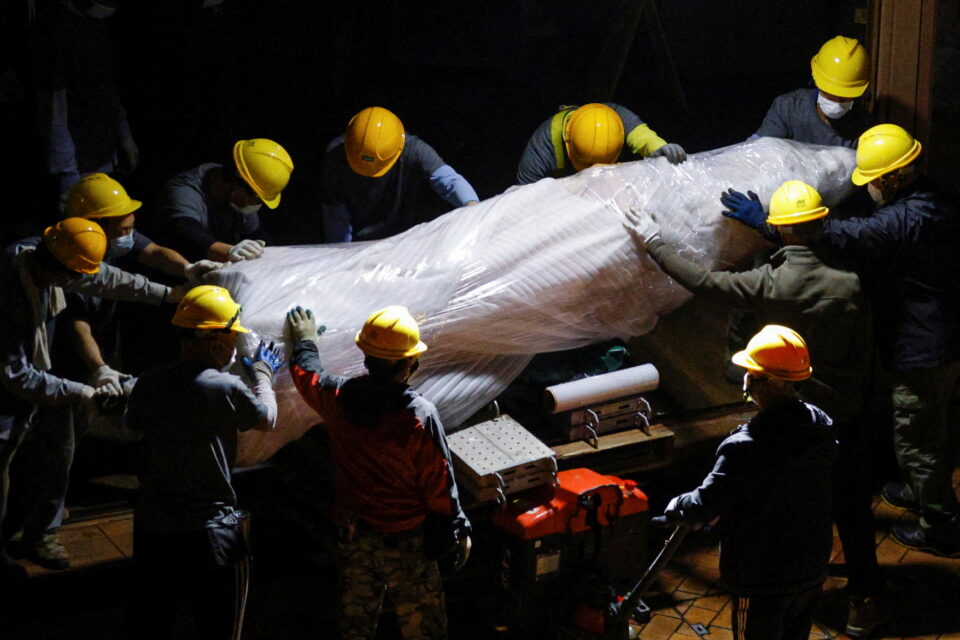 Workers remove a part of the "Pillar of Shame" statue by Danish sculptor Jens Galschiot which paid tribute to the victims of the Tiananmen Square crackdown in Beijing, at the University of Hong Kong

Two more Hong Kong universities removed on Friday public monuments to the 1989 Tiananmen protests in Beijing, following the dismantling of a sculpture commemorating victims of the crackdown at another university this week.

The removals at Chinese University and Lingnan University in the global financial hub came as authorities have been clamping down under a national security law imposed by China.

Human rights activists say the law is being used to suppress civil society, jail democracy campaigners and curb basic freedoms, but authorities say the security laws have restored stability after mass protests in 2019.

Just before dawn, a 6.4-metre (20-foot) -tall bronze statue representing the “Goddess of Democracy” holding a flame aloft was removed from a public piazza at Chinese University.

In a statement, the university said the “unauthorised statue” had been taken away following an “internal assessment”.

The sculpture, which had stood on the campus for more than a decade, was modelled on a 10-metre (30-foot) white plaster and foam statue erected by students in Tiananmen Square to symbolise their resolve to pursue liberty and democracy in China under Communist party rule.

A group of about two dozen students gathered to denounce the move by their university, handing out June 4 flyers as well as missing person posters of the democracy goddess with the words: “Have you seen her?” Another read, “Bring her back”.

Others placed crystanthemums, a traditional Chinese symbol of mourning, lit candles on the site where the statue once stood, and played the song “Bloodstained Glory” to remember the hundreds, perhaps thousands killed in 1989.

“This statue represents the school environment is open. It’s a symbol of academic freedom … It makes people doubt whether the school can still ensure the space is free and people can speak freely,” he told Reuters.

Unlike mainland China, where authorities ban any memorials or public commemoration of June 4, Hong Kong had previously been the only place on Chinese soil where such remembrances were permissible.

For the past two years, however, police, citing COVID-19 risks, have banned an annual June 4 candlelight vigil that had regularly drawn tens of thousands of people.

Also before dawn on Christmas Eve, Hong Kong’s Lingnan University took down a wall relief sculpture about the Tiananmen event that depicted the “Goddess of Democracy” and a row of tanks halting before a lone protester known as “tank man”; as well as victims shot by Chinese troops.

When asked by Reuters whether Hong Kong or Chinese authorities had instructed all three universities to remove these Tiananmen monuments, the office of Hong Kong’s leader, Carrie Lam, said it had no comment.

The sculptor of both works, Chen Weiming, told Reuters he would sue the universities if there was any damage to his works.

In the main hall of the student union at Lingnan University, a towering red drawing of the Goddess of Democracy had also been covered over in grey paint.

Students responded by pasting a sheet of paper with the word “shameful” on the effaced image, but it was quickly ripped off by security guards.

In an email to Reuters, Lingnan University said that items that may pose “legal and safety risks” had been “cleared, or removed and stored appropriately”.

When Hong Kong returned from British to Chinese rule in 1997, it was promised wide ranging autonomy and freedoms by China under a so-called “one country, two systems” arrangement.

Earlier this week, the University of Hong Kong dismantled and removed an eight-metre (26-ft) -tall “pillar of shame” statue to victims of the Tiananmen crackdown.

The disappearances of these symbolic monuments from three universities in quick succession mean that hardly any Tiananmen monuments remain to public view in Hong Kong.

“Since the Chinese communists implemented the national security law in Hong Kong, they have eradicated the freedom of press, of assembly and the freedom of expression,” Chen, the artist, told Reuters.

“They want to remove the real history of the brutal crackdown … they wouldn’t allow any different viewpoints to continue to exist in Hong Kong.”

Pele returns home for Christmas as treatment for tumour continues

Murray given wildcard for Australian Open