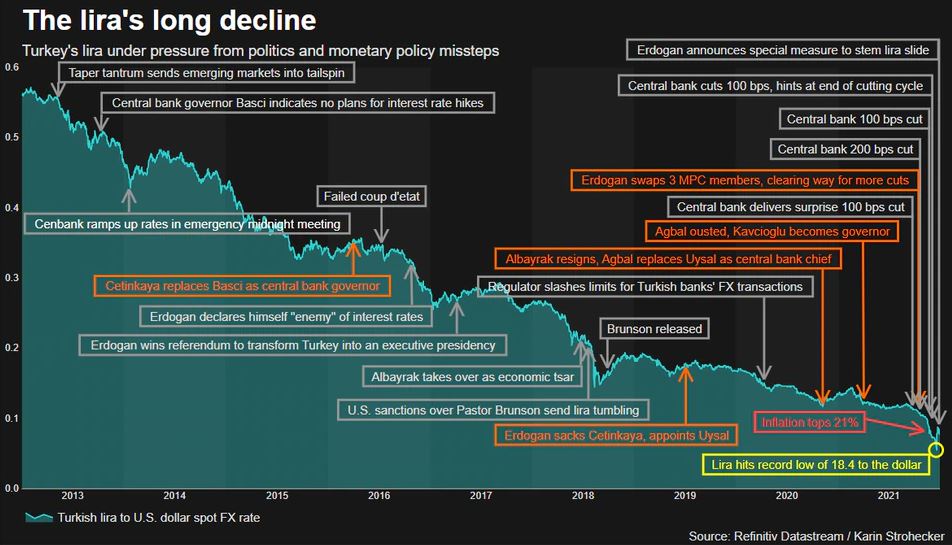 Emerging market stocks broke a two-year winning run, but were set to end the last day of 2021 on a positive note on Friday boosted by China shares, while Turkey’s lira seesawed in thin trade after hefty losses this week.

On the year, however, the Chinese indexes lost as a regulatory crackdown in the country had hammered heavyweight technology, internet and gaming stocks, while debt default risks at heavily indebted real estate developer China Evergrande Group (3333.HK) hurt the property sector.

The broader EM index is on track to close about 4.5 per cent lower on the year, compared with a more than 25 per cent rise in the US benchmark S&P 500 (.SPX).

Turkey’s BIST index (.XU100) which surged more than 60 per cent to record highs this year as stocks were rendered cheap by a lira fall and supported by looser monetary policy, was set to end the year up 27 per cent. It cut a chunk of losses this month as investors lost faith in the central bank following continued unorthodox monetary policy demanded by the country’s President Tayyip Erdogan.

Turkey’s lira moved between 13.0 and 13.4 this morning after sinking around 20 per cent this week, giving back a chunk of last week’s more than 50 per cent surge that followed some support measures by the central bank.

But the interventions do not tackle the core problem, which should see the currency weaken further, analysts said.

“The lira is therefore likely to weaken further until credibility in inflation targeting picks up.” 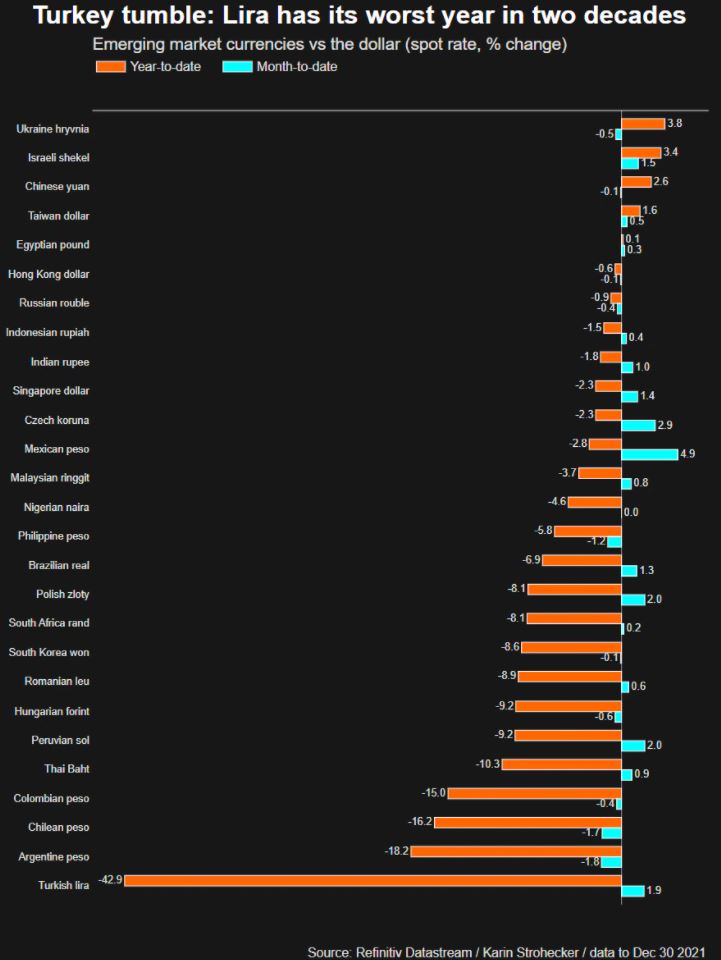 The lira is set to end the year down about 43 per cent – its worst year in two decades, and the worst performance among EM currencies.

The US Federal Reserve signalling tighter monetary policy next year and uncertainty around the coronavirus pandemic add to local pressures in emerging markets, such as an election in Brazil, new policies under a new government in Chile, geopolitical tensions in Russia, Ukraine and Belarus, among others.

Russia’s rouble slipped further towards 75 a dollar after a call between President Vladimir Putin and US counterpart Joe Biden yielded no deal to defuse tensions over Moscow’s military build-up near Ukraine. Putin warned against more US sanctions.

The rouble is down about 0.8 per cent this year, with higher oil prices cushioning the fall for the exporter. Russian stocks (.IMOEX) gained 15 per cent in 2021.

South Africa’s rand was flat and looked to end the year down about 7 per cent. South Africa said it passed the peak of its fourth COVID-19 wave and lifted a midnight to 4 a.m. curfew on Thursday.