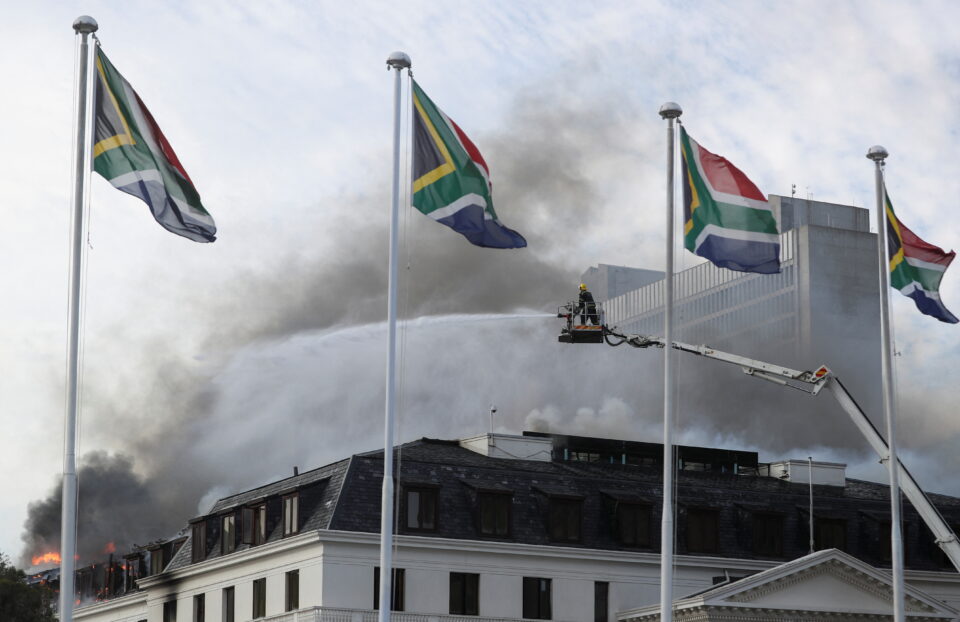 Firefighters work at the national parliament as the fire flared up again, in Cape Town, South Africa, January 3, 2022. REUTERS/Mike Hutchings

A new blaze broke out on Monday at the complex housing the two chambers of South Africa’s national parliament in Cape Town, one day after a devastating fire swept through the buildings.

“The fire and rescue service confirms that the fire at parliament has flared up. The void beneath the roof sheeting of the National Assembly is on fire,” a spokesman for the city’s fire services said on Monday afternoon.

Police have charged a 49-year-old man with arson and other offences including theft, and he was expected to appear in court on Tuesday.

National Assembly speaker Nosiviwe Mapisa-Nqakula said the arson, if confirmed, would represent an attack on the country’s democracy.

The initial fire on Sunday caused the roof of the New Wing housing the assembly’s lower chamber to collapse. The roof of the Old Wing, which dates back to 1884 and houses the upper chamber National Council of Provinces (NCOP), also partially collapsed.

However, important sections including a museum with artworks and heritage objects were saved, as was an embroidered tapestry telling the story of the Eastern Cape on the ground floor of the Old Assembly Building, officials said.

Earlier on Monday firefighters had managed to extinguish most of the initial blaze. As the new fire flared, parliament said firefighters had been reinforced with additional equipment and personnel.

A Reuters journalist at the scene said the speed of the wind, a key factor in the Cape’s fire season, had increased significantly and could hamper attempts to douse flames.

A city update released around 10pm local time (2000 GMT) said the fourth and fifth floors of the new wing, above the national assembly, were “completely gutted” as wind-fanned flames threatened historic Tuynhuys, the Cape Town office of President Cyril Ramaphosa.

The parliament has played a crucial role in South Africa’s transition from white minority rule as the place where transformative legislation has been passed, helping roll back repressive policies implemented under the apartheid era.

In a separate statement, the elite Hawks police said the suspect was believed to have gained entry to the parliament through a window in one of the offices.

“There is a possibility of other charges being added as there was a security breach here,” Hawks spokesperson Nomthandazo Mbambo told eNCA television.

Speaker Mapisa-Nqakula said President Ramaphosa’s address to parliament, set for February 10, would still go ahead. Lawmakers will still debate and approve the budget and committees will continue their work, parliamentary officials said.