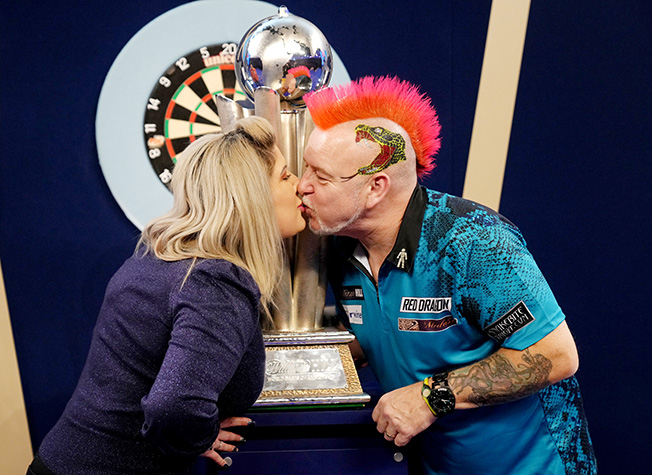 Peter Wright put his name alongside some of the greats of the game by winning his second PDC World Championship.

The Scot backed up his 2020 title with a 7-5 victory over Michael Smith in a tense final at Alexandra Palace to join an elite list of names to win the Sid Waddell Trophy twice.

Wright, ranked number two in the world, produced his best darts when it really mattered, winning nine of the last 10 legs to get the better of Smith, who will be left ruing a missed opportunity.

But Wright, who did not get to bed until the early hours of Monday after an epic semi-final win over Gary Anderson, turned on the style to win a tournament that at one point it looked like might not go on after coronavirus forced the withdrawal of several players.

And Wright was last man standing as both finalists were left in tears on the stage at the end.

Smith was inconsolable but could take pride in throwing a record 83 180s, more than any other player in a single tournament.

A relieved Wright told Sky Sports: “I’m over the moon. I’ve done it, but obviously me and Mike didn’t perform how we can.

“I can’t explain what went wrong for 90 per cent of the match. I just kept swapping darts trying to find something.”

This was the premier evening of competition in the sport, but the standard of the first set did not live up to the billing as both men were wayward with their doubles.

It was typified by the second leg where between them they missed 21 attempts to close it out, Smith eventually recording a 28-dart leg to take it.

Wright’s composure allowed him to take control and, after taking the first set on his throw, he then went 2-0 up after posting consecutive 148 and 124 checkouts.

Smith knew he had to improve his finishing and delivered a masterful 167 checkout – treble 20, treble 19, bullseye – to help him break Smith’s throw in the third set and finally get on the board.

He then backed that up taking by the fourth set to make it 2-2, but was grateful for Wright missing two doubles in the deciding leg.

Smith created history on his way to taking a 4-3 lead as in the fifth set he plundered his 72nd 180 of the tournament, breaking Anderson’s previous record set in 2017.

The maximums kept on coming, allowing Bully Boy to rattle off back-to-back sets as he gained the advantage for the first time.

Smith will have nightmares about what happened next as glory seemed within touching distance as he led 5-4 and had the darts to extend that to 6-4, but Wright had other ideas.

He quickly rattled off nine of the next 10 legs to get the job done and claim glory.

Wright blamed a “really strange” atmosphere for both players’ erratic darts, saying on Sky Sports: “The atmosphere in here was just affecting my darts so badly – it affected Michael’s as well.”

Smith vowed to swallow his disappointment and return to the big stage.

“I must have done something terrible in a past life because it’s doing my head in now.

“I’ll have a bad night now, but I’ll definitely be back on that board and I’ll be getting ready for the next one.”

Osaka aims to rediscover love for the game after winning return