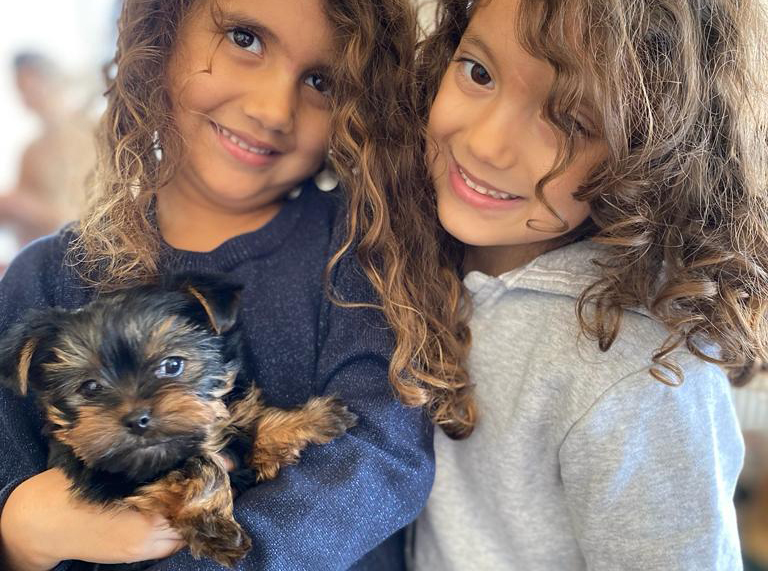 I’m not a fan of New Year’s resolutions, so I haven’t made any this year. That’s because I have found that instead of getting me off to a good start, I invariably end up feeling stressed out by them. In fact, the only New Year’s resolution I ever made was on January 1, 2005, when I vowed to quit smoking. I haven’t picked up a cigarette since.

However, the big news our end is that we have entered 2022 with a puppy. Her name is Cleo. She quite literally dropped into our lap just before Christmas. She wasn’t a Christmas gift, and we didn’t intentionally go out of our way to become dog owners, but sometimes life unfolds in ways you don’t expect.

We are quite literally head over heels in love with our four-legged family member.

Cleo is a 10-week-old Yorkshire Terrier. I never saw myself owning a small dog; we always liked bigger dogs as a family. Particularly my husband, who is 6ft 2, and always saw himself owning a much larger breed.

But, when you live in an apartment, having a bigger dog can be more of a challenge – or at least that’s what we’ve always believed – so we always put off getting one, telling ourselves that one day, when we moved into a house, we’d get a dog.

But you know what they say about tomorrow. It never comes.

That’s why when Cleo appeared we leapt at the chance. Well, sort of. It took me a full 12 hours to commit to bringing her home with us because I am well aware that a puppy is not just for Christmas and that owning a dog is a lifelong commitment.

My daughter was smitten from the get-go and was devastated when we didn’t bring Cleo home with us immediately. He brother was more concerned with knowing whether the puppy would grow up to be a big dog like a Rottweiler or a Bullmastiff. He was disappointed to hear that Yorkies don’t get very big.

When we finally decided to bring Cleo home, we were excited and nervous. Much the way you’d feel about bringing a new baby home.

In fact, there were days I felt almost as tired as I had in those first few months with our twins, as I got out of bed in the middle of the night to settle Cleo or to take her out of her pen for a cuddle and a play. A couple of nights I even brought her back into bed with me and we’d both doze off for a few hours. Me desperate for sleep. Cleo happy to snuggle up.

The kids are aware that Cleo is small and although they’re only five and a half, they’re both very gentle with her. As for Cleo, she adores them.

I’ve lived with dogs my entire childhood and early adulthood and my children have also been around dogs since birth. But this is the first time we have owned a dog as a family.

Cleo hasn’t been outside yet because she hasn’t had her third vaccine. For now she is content exploring our apartment and veranda. She’s especially fond of the children’s room, particularly hiding under their bed or pulling at their duvet cover and has several hiding spots in the living room too.

She is also a fan of playing fetch, and the way she wiggles when she runs reminds me of when the kids were toddlers propelling themselves forwards at breakneck speed. Cleo also loves praise, especially being told well done with gusto for peeing or pooping on her potty pads.

Katerina was at first put out that Cleo was getting so much attention from us and being told “well done” and “good girl” so often. I never expected her to feel jealous, but I guess it’s only natural and I’m glad she told us how she was feeling.

As I write, Cleo has only been with us 10 days and yet I can’t imagine life without her anymore. None of us can. Both my husband and I work from home, so she’s hardly ever left alone and when we do go out or plan on travelling abroad she’s small enough to come with us. I’ve already checked which airlines allow small animals in the cabin and it looks like we will have to go via Athens when heading to the UK from now on. Either that or drive through Europe. Private jets also allow pets onboard but we aren’t in that league!

Still, who knows what the future holds? Like I said earlier, life often unfolds in the most unexpected ways and when you choose to just go with it because it feels right, it can surprise you in the most wonderful ways. Like finding yourself opening your heart and being won over by a small dog.

Chinese celebrate arrival of Year of the Tiger

Not much to do but survive the heat

Is Parklane the new Mediterranean spot for jet setters?