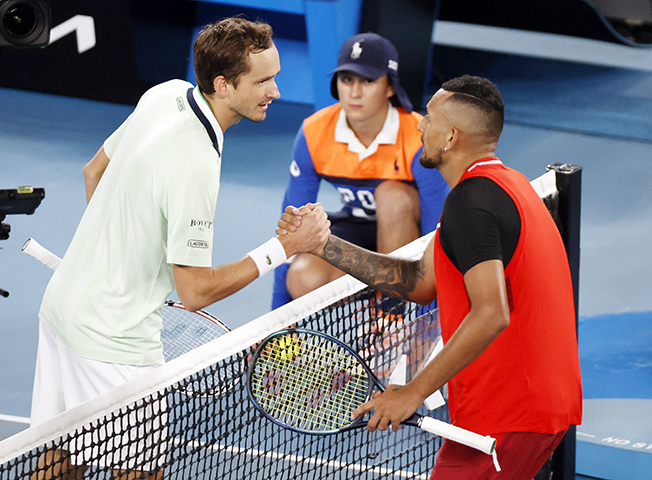 Highlights of the fourth day of the Australian Open at Melbourne Park on Thursday, all times local (GMT +11):

Jannik Sinner proved to be too much to handle for Steve Johnson, beating the American 6-2 6-4 6-3 to set up a third-round tie against Taro Daniel.

“I started the match very well, and when I had to break in every set, I was quite relaxed,” Sinner said.

Former world number one Simona Halep put in a clinical performance to see off Beatriz Haddad Maia 6-2 6-0 and progress to the third round.

“It’s been a little difficult to wait all day to play, but it was a good match before me (Kyrgios v Medvedev), so that motivated a little,” Halep said.

The world number two signed “Siuuu!” on the camera lens following the win after the crowd appeared to use the celebration chant associated with Manchester United’s Cristiano Ronaldo during the match.

Unseeded Danka Kovinic ended U.S. Open champion Emma Raducanu’s hopes of capturing a second major as she prevailed 6-4 4-6 6-3 to reach the third round.

Raducanu was leading 3-0 in the first set when she was forced to take a medical timeout to get treatment for blisters on her dominant right hand.

2030 DANIEL TOO GOOD FOR MURRAY

Murray, probably still reeling from the effects of his arduous five-set victory in the first round, fought back with an early break in the third set but was no match for Daniel.

Felix Auger Aliassime staved off a strong challenge from Alejandro Davidovich Fokina to win 7-6(4) 6-7(4) 7-6(5) 7-6(4) in four hours and 19 minutes and book his place in the third round. The Canadian ninth seed faces Dan Evans next.

Daria Kasatkina eased past Magda Linette 6-2 6-3 to set up a third-round clash with seventh seed Iga Swiatek. Kasatkina has beaten the former French Open champion in three sets when they met for the first time in Eastbourne last year.

Second seed Aryna Sabalenka surrendered the opening set, like she did in her opener, before outclassing China’s Wang Xinyu 1-6 6-4 6-2 on Rod Laver Arena to reach the third round.

Former U.S. Open champion Sam Stosur’s 20th and final Australian Open singles campaign ended in a 6-2 6-2 loss to 10th seed Anastasia Pavlyuchenkova. Stosur is set to finish her singles career after the major but will play doubles in 2022.

“It’s a special moment for Sam and I want to give it to her. It was emotional for me today. I had goosebumps when everyone was clapping for Sam. She’s a wonderful human being and a great tennis player. Thanks, Sam,” Pavlyuchenkova said.

An emotional Stosur said that she always dreamed of winning a Grand Slam event, a feat she achieved at Flushing Meadows in 2011. “To do what I’ve done, dreaming as a little kid is phenomenal,” Stosur said. “I’ve done more than I ever thought possible.”

The cheers for Stosur turned to boos for Australian Open tournament director Craig Tiley, under fire for his role in the Novak Djokovic saga, when he made his first public appearance at Melbourne Park this week to congratulate her.

Last year’s quarter-finalist Andrey Rublev made short work of Ricardas Berankis with a 6-4 6-2 6-0 win over the unseeded Lithuanian to reach the third round for the fourth time. The Russian fifth seed next meets Marin Cilic who beat Norbert Gombos 6-2 6-3 3-6 7-6(6).

“Today, I stepped on the court thinking I’d have fun. That’s the best way I play. There was a lack of fun sometimes in my 16-year career. But right now I want to enjoy it,” Cornet said.

“I don’t know how many years I have left. Today was a perfect gift.”

Joining Muguruza in making an early exit was sixth seed Anett Kontaveit, who lost 6-2 6-4 to 19-year-old Clara Tauson – the girls’ singles champion at Melbourne Park in 2019.

Former French Open champion Iga Swiatek booked her place in the third round, the seventh seed advancing with a 6-2 6-2 win over Sweden’s Rebecca Peterson.

Britain’s Dan Evans, the number 24 seed, moved through to the next round after his opponent, Arthur Rinderknech, pulled out with a wrist injury.

Play at Melbourne Park got underway on all courts as scheduled on day four of the year’s first Grand Slam.

A warm day is expected for the second round matches with the temperature already at 21 Celsius (71 Fahrenheit) with a high of 29C forecast.